You know, I’ve watched most of Sex and the City. My fiancee has the entire series and loves it. She watches it all the time. I, of course, watch along because I can’t read when there’s something on tv (or on a computer). I never saw the movie, however, but I understand the appeal of wanting to be like Carrie. I’ve seen plenty of documentaries where women claim that they’re the real Carrie Bradshaw. And when the movie came out, I saw dozens of women wearing “I’m Carrie” tshirts and tanktops. I almost want to stop them and go “You’re able to afford 500 dollar shoes, party every night, and have a job the requires you to not work?” but we all know that’s not the point of the show. It’s not suppose to be realistic. It fits perfectly with its target market which just happens to be the type of young women who move to NYC. However, I don’t see what’s the point in dropping 15k on a dress to look like Carrie because, unless you’re rail thin because of a coke problem, you’re not going to look the same. If you have boobs, you’ll look better. If you’re curvy, you’re going to look like a muffin top in that dress. And as much as weddings are suppose to be fantasy, it should be fantasy about looking your best NOT looking like someone else because, I’m sorry, if you’re not Sarah Jessica Parker, you’re not going to look like her. And I hope you don’t. She’s a clothes hanger, nothing more. 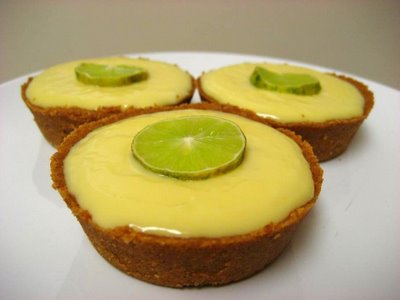 Mini Pies have been trendy since at least 2001, if not earlier. Once mini french pastry exploded nation wide, everyone wanted mini pies. I’m a fan of mini key lime pie tarts. Anything I can shovel into my face three at a time is something worth investing in. My only problem, of course, is that it’s really easy to make a bad mini pie. And how? Poorly plated, poorly baked, and poor ingredients can make a mini pie a complete and utter failure. You can get buy with cutting corners on a larger slice because a lot of people don’t have taste and mistake large portions for deliciousness. But with a mini pie, you have one shot at perfection. And if you screw up the taste, that’s it, the experience is over. Mini pies shouldn’t be viewed as a cheaper, or cute, alternative to regular portioned food. They should be viewed as a statement of excellence and deliciousness and should be made at a much higher quality compared to normal pies.