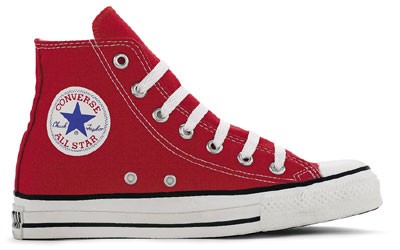 I don’t have a lot of shoes. I tend to only wear two or three pairs before they wear out and develop holes in the bottom (which seems to only take about two months it seems). Currently, I’m wearing red Converse All-star Chucks when I go to the gym. I wear black low top Chucks when it’s hot and I bust out the sorts. And I wear a pair of Oxford clones from Urban Outfitters as my work/everyday shoe. The problem with the Oxfords is that they don’t have much traction on the bottom. In fact, they have none. I can slip and slide down a sidewalk like I’m skating in Bryant Park. When I’m carrying groceries from the store, that’s not very fun.

So, today at church, I was going to be the crucifer (and I ended up filling in as a chalice bearer during communion). As a crucifer, I lead the four processions that occur during service, carrying a large cruifix in the process. I’m also dressed in a white and black robe. My plan was to wear my oxfords because that’s kinda dressy and I tend to dress down for church and I wanted to be a little different today. But then I realized that the church’s floors were waxed two weeks ago. I spent all day yesterday running nightmare scenarios in my head where I slip while carrying the cross and it lands on my head and kills me. But since I’m already at the church when it happens, the funeral is short and sweet and quite lovely. And then Aretha Franklin comes by, wearing one of her hats, and brings the house down with her beautiful voice. The place would be packed of course. Hundreds of people would fill out into the streets. And my fiancee would throw herself onto my casket going “I CAN’T LIVE WITHOUT YOU!”. It would be very Hollywood and Michael Bay would do the special effects. I’d then haunt the church which would be nice until it’s eventually razed and some condos are put in its place. That’s how it always goes.

Anyways, not wanting that to happen, I wore my red Chucks instead. Nothing makes the old ladies at church excited than seeing my red Chucks carrying the cross or when they bend down and say “Amen” after they dip the bread into the cup. One even told me that she liked my shoes before she said Amen right after I said “The Blood of Christ shed for you”. I couldn’t help it but say “Thanks!” I’m not sure the Church Fathers would have approved.