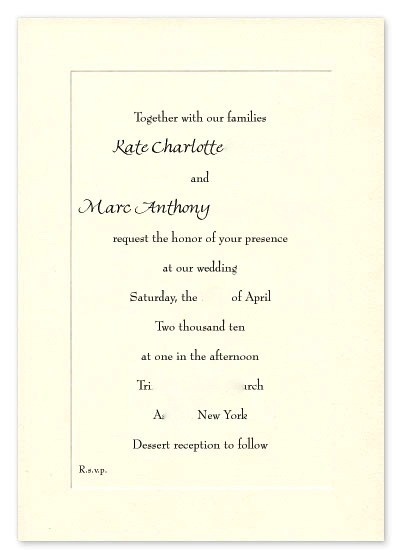 Yes that is my real first and middle name

So my fiancee and I are thinking about our invitations.

And we’re looking at Costco.

But this invite from Married by the Sea (via manolobrides.com( might be an even better choice.

We had a little chat on the subway yesterday about how to word the invitation and we’re still not sure how to do it. Since we’re paying for the event (well, most of it), we want to start out the invitation saying “With our parents, Kate and Marc would be honored at your presence at our wedding” or something along those lines. The problem is with the initial “our”. It bothers my fiancee. It doesn’t read right to her. Why do we start the invitation saying “our” but then seem to refer to ourselves in the third person for the rest of the invitation? Do the people not receiving the invitation know who we are? Are we so distant from them that they need to hear our full name again? And if that’s true, why are we inviting them in the first place?

My fiancee thought about throwing in “with their parents” but that didn’t sound right either and I’m still confused about what exactly to say. Maybe invitations have moved beyond needing to sound “right” but rather have a set convention that should be continued until “our parents” starts to sound 100% correct as language evolves and changes. I dunno. What I do know, however, is that 100 bucks for 125 invites is a good deal which is why we’re sticking with simple invitations I believe. My only concern is the quality of the printing job since I’ve never seen a Costco printed invitation before. If it’s anything like their cakes (which I have eaten a lot of – you can’t attend a church and not end up eating Costco cake), it should be adequate for the job.