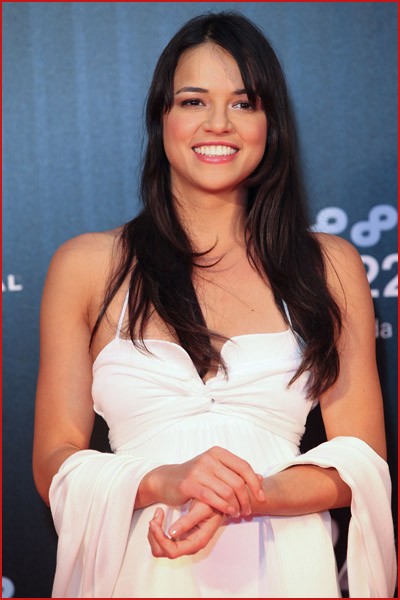 Michelle Rodriguez is not the most stable celebrity on the face of the planet. She’s an alcoholic, she’s pretty violent, and she’ll go to extreme lengths to not-get-not-noticed by the paparazzi. We all know this. However, Michelle does bring up a good point when it comes to inviting people into your bridal party. If she behaves like Michelle Rodriguez did over the weekend, she probably shouldn’t be allowed to attend your wedding.

People tend not to take into consideration their wedding party’s member’s personal standards of behavior before they include them in their wedding. People don’t magically change just because they are placed in a situation where they’re given certain responsibilities or they’re suppose to act with some class. If a person misbehaves, has no class, or will push clothed guests into a pool, they’re not going to change just because they’re now wearing a bridesmaid dress. All they’re going to do is cause you problems.

My fiancee and I are keeping our wedding party very small. She’s having 1, I’m having one. Mine is my brother. Her’s is her best friend. These are both people we can trust and we are sure won’t break up a bachelorette party by yelling at the stripper, calling him fat and saying he has a small penis (though, in Michelle Rodriguez’s defense, the stripper did something incredibly tasteless but very typical in bachelorette parties and I fully support Michelle emasculating the fellow in front of others). If my brother was gonna be an imperfect person at my wedding, I wouldn’t have him in my wedding party. I don’t think that just because I’m getting married that anyone or anything should be assumed will happen. That leads to nonsense, drunken uncles falling into wedding cakes, and the bride and groom going on a bender and punching a cop in the face. There’s no need to bring a Michelle Rodriguez type character to your wedding unless you WANT her to act like they always do. And if you’re upset that they “ruined your wedding day”, I’m sorry but you invited them knowing what they usually do. What else could you expect?