Yesterday, I preached for the first time at my field education site. Once I can figure out how to get a publicly accessible video online (it’s too long for youtube), I’ll make sure to share it with all of you. My sermon is, however, posted on Facebook so if we’re friends, please go and watch. I was told I did a good job but it always takes me a few days to get the nerve to actually watch myself on video. I need the distance that only time can give.

Now, I won’t lie, I was a tad nervous about preaching but I wasn’t nervous about standing in front of the congregation. That doesn’t seem to bother me. What was throwing me, however, was the actual content of my sermon. This was only my the third time standing in a pulpit so I struggle over several weeks with exactly what I was going to say. I sometimes woke up early in the morning to find my brain already awake, working on the problem. The text was John 9.1-41 which is a fun story but, good Lord, it’s a lot of text. What exactly was I going to say? What did the Holy Spirit want shared? What would the community respond to? And how do I make it so I don’t sound like a complete ass?

I have a feeling that these will be the standard questions of my preaching career.

It wasn’t until Saturday before it all came together. I sat on my bed, with my dog sitting by my side, with Britney Spears’ new album as my soundtrack, and I cranked it out. I spoke it out loud a few times, threw in extra line breaks, and timed myself. It came out under 12 minutes which I felt was pretty good (the 9 am service has a time limit). Before bed, I polished my shoes, picked out what I was going to wear, and used a lint roller to remove all the stray cat hairs. I felt ready.

There was, however, one thing that I wasn’t prepared for while I stood in the pulpit during the second (11 am) service. In my sermon, I peppered in a few elements of humor (I like to make people laugh – it’s a vice). Several of the jokes I stole from preachers I had seen during the week (I’ll source them later, I promise). Some I came up with myself. I thought they were pretty good. My message was an attempt at a quick law & gospel sermon – it was gonna be a tad heavy and I like the juxtaposition that humor can add in a sermon. At the 9 am service, my jokes got laughs. I heard some snarfles. People got into it. Sure, it might just have been one person (a fellow seminarian about to head to her first call) but still! It worked. So when I stood in the pulpit a second time, I was a little cocky. My first joke worked – a little laugh. But by the second one, nothing. By the third one, I got a little worried. As I read my manuscript, a thought popped in my head “had I fallen flat? Is the mic on? Do I need to try something else?”

When I told this story earlier today, a classmate of mine remarked “That’s just like a standup comic I bet.” She’s right. For a moment, I thought I lost the room. I thought people were rolling my eyes. I thought, for a moment, that maybe everyone in the audience were having their eyes glazed over, that they would start checking their watches, and that it was over and done – and there’s still 10 minutes to go!

When I finished the service and greeted people at the door, the positive comments from folks were pretty fantastic. People really really liked it. They loved my imagery and the half-dozen retired pastors in the 11 am service all said I did a good job. Not to toot my own horn but I think I did well (even when I subtract the standard niceness given to pastors after their sermons). And I really enjoyed the process of creating the sermon and seeing what the Holy Spirit had in store. But the next time the funny in my sermon seems to fall flat, I’ll try not to freak out inside. Or maybe I’ll make signs. I have a professor who has a few – they seem to work. 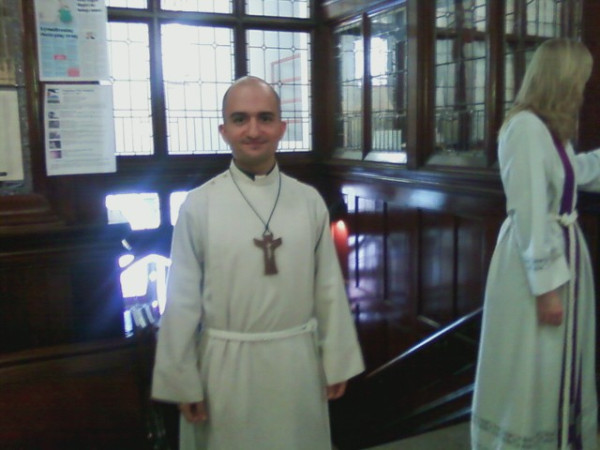