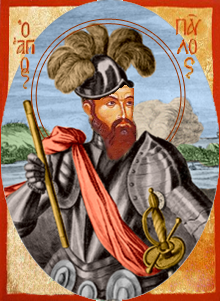 In my course on First & Second Corinthians, we examine the letters from Paul through various perspectives, contexts, contemporary theological movements, and racial/ethnical/colonial lenses. It involves a lot of reading of contrasting opinions and views that usually leaves my brain feeling over-saturated, full, and completely confused which is a lot of fun, to be honest.

This past week, the concept of Paul as colonizer came up. I’ll admit, I struggled with this view a lot. In certain ways, this image makes sense. Paul, leaving Judea & Antioch, traveled through out Asia Minor and Greece, established (or met with) communities of the Jesus movement. He viewed himself as the Apostle to the Gentiles and planted communities everywhere. In his letters, we can trace the conflicts he had with the communities he interacted with. This image, of taking the message of Jesus out, into new lands, and waving his authority around, seems to match our understanding of what it means to “colonize.” And, for post-colonial people, seeing Paul as a colonizer helps to build a lens of Paul that doesn’t assume that the authoritative structures that he interacted with (or revolted against) and that later Christianity developed and imposed on others, should be accepted as the default meaning of what the Scriptures says. This image worked in the classroom and I saw many of my classmates move see this image of Paul and relate it to colonial movements throughout history. But I struggled with it because I really have a hard time seeing Paul as a colonizer since the image of colonization that I envision is what happened in the New World. England, France, and especially Spain’s, use of military force, economic might, and disease to destroy, conquer, and the native americans of the Americas is how I imagine colonization to be. It’s hard for me to see Paul as a conquistador since he didn’t have a Spanish Galleon supporting him (though, legend has it, he did have the horse).

Of course, my model of colonization isn’t the only one that existed in the world. The British experience in India, the United States with Puerto Rico and the Philippines, and other stories of imperialism doesn’t necessarily follow the New World movement to a T. But there is the issue of force applied to those situations and this force seems non-existing in Paul’s letter. Sure, Paul throws his authority around and tries to claim that he has force (and his language can be very violent and angry), but he doesn’t have the external force that I envision colonizers to have. And his argument for the subjection, or containment, of the subs-sections of his community, while forceful, are actually limited in the larger scheme of things. It was Rome, not Paul, who was the imperial power and it was Rome, not Paul, that re-founded Corinth as a Roman colony. The best image, in my mind, for Paul would be if Native Americans had sent a mission to Spain in 1510 – a mission that didn’t involve them arriving in chains.

Now, I don’t think it’s unreasonable to see Paul as a colonizer nor do I think it unreasonable to see the later pastoral epistles and its structuring of authority as a direction towards imperialism. Nor should my problem with seeing Paul as a colonizer in anyway get Christianity off the hook for its role in the history of imperialism and colonization. But I just can’t seem to subjectively withdraw, take a step back, and see him as the role of the conquistador. And the fact that I keep using that term is part of the problem. My own experience, as a Mexican-American, has embedded my image of colonization through the hispanic experience. It isn’t that I don’t have the imagination to see the colonial experience through other lenses but that I can’t seem to just…get it. I guess that’s one of my biases then.