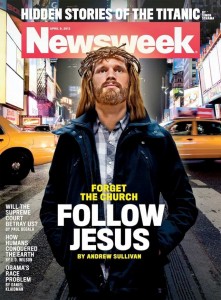 I know I shouldn’t read Andrew Sullivan. I know that I disagree with most of what he writes and, to be honest, his most recent editorial about Christianity is no different. He feels the need to jump on the Jefferson bandwagon and mistake Jefferson’s Americanizing of Jesus as, somehow, anti-political-power. Jefferson’s Jesus is not an exaltation of Jesus but rather a reduction of Jesus into a time specific, American, identity. Jefferson’s legacy, when it comes to Jesus, is to do what America does all the time about Jesus – molding Jesus into what they project onto the Jesus project. Jesus doesn’t break into the world but, rather, Jesus is a product of an idealized, American world.

That’s what really gets me about Sullivan. The argument for a simplified Christianity, a Jesus-focused Christianity, is an old argument. The Reformers of the 16th century pushed for that. The men and women who went into the desert pushed for that. The ancestors to current American Evangelicalism pushed for that. Hell, pietism and my pal Henry Muhlenberg pushed for that. What Sullivan is arguing is a return to what Spener wanted in the 17th century – a visualized, simplified, transformative Christianity that is visibly seen in the church. The true church, then, is the church of Jesus! Simplicity! That’s the key to thing. Even Sullivan’s argument about Francis is all about simplicity. His argument is that Christianity is overload, too political, and too influenced by “worldliness.” Sullivan sounds like many of the young, hipster-esque non-denominational pastors out there but also sounds a lot like those who feel that Jesus wasn’t divine but, rather, a moral teacher. The idea is to strip Christianity back to Jesus – with the assumption that we, unlike the disciples in Mark, get it and we know even better than Peter, John, James, and Paul.

But here’s where Sullivan really blows it and that’s with the statement “As Jesus was without politics, so was Francis.” What? Or how about “When politics is necessary, as it is, the kind of Christianity I am describing seeks always to translate religious truths into reasoned, secular arguments that can appeal to those of other faiths and none at all.” Or, better yet, let’s make silly arguments and throw out parts of the gospel story by claiming that the patrons in Luke and Paul didn’t exist: “Jesus, like Francis, was a homeless person, as were his closest followers. He possessed nothing‚Äîand thereby everything.” All of this is, in reality, unscriptural. It’s a reduction of the complex reality of the what the scriptures are. It also tries to remove the current church, or argue that the crisis in the church can be resolved by removing itself out of its reality and where it is. By excising true Christianity from the rest of reality, true change can occur, true love can flourish, and we can get everyone to like us. Or something like that.

What Sullivan should be arguing is the question that Christianity has been working out since Constantine converted: how does Christianity work when it is in a position of political power? Because we still HAVEN’T figured that out (though I think Two Kingdom’s theology gets that bit right :p). And it doesn’t matter if its right wing or left wing, social justice oriented or rapture-focused, any Christianity in a position of political power is going to find itself in a dangerous position because of the political reality and visions within the gospel itself. A reduction to just a “Jesus focused” reality won’t change that problem. And we know that won’t work because we’ve been trying to do that for two thousand years. Reducing our actions to just what Jesus did, or taught, or what we believe Jesus did or taught, in many ways, denies Sin. It denies the need for Christ to die. And it reduces faith. Removing complexity from Christianity, Jesus, and God does the opposite of what Sullivan claims he wants to do. It’s not about accepting mystery and burying complexity into the mist of “somewhere else.” It’s actually how we get ourselves off the hook from the troubling parts of scripture, the complexity of canon, and the complexity of our own history and story. And why should we deny that? The Gospel is bigger than our complexity; God is bigger than our own failures; and we should own it, and never, ever, runaway from it.

One thought on “Pietism 2.0, the New York Hipster Jesus”