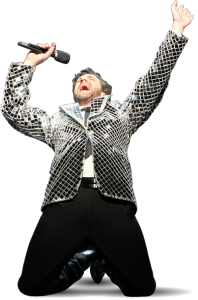 Yesterday, after church (my final Sunday at my field site until the fall), K and I saw Leap of Faith on Broadway. Now, before you judge us, please know that we got in for free. The show has yet to receive any good reviews and the only reason why it is still on Broadway is because it received a Tony nomination for Best Musical (the rumor is that the producers are trying to raise $2 million dollars to keep the show open till June 10 since it’s losing $250k a week right now). The story is predictable, the wigs questionable, and the lyrics are forgettable (except for one). The dancing is good and it is an awesomely racially diverse cast (which, come to think about it, why are all the religious themed shows the most diverse?) It isn’t a good show but since my expectations were really low, I kinda enjoyed it. It had that dumb summer fun feel to it. And I would wear Raul’s mirror jacket in a heartbeat. Heck, I’d preach in it and blind everyone for Jesus. You think Paul saw a light? Just wait until I put on that jacket!

Anyways, I wish I could comment on the religious elements of the show but, well, it was pretty light. Jesus showed up in the lyrics but there was very little theology in the show. It’s only God moments are pretty weak, predictable, and boring. All you have to do is believe? Sheesh. Been there, done that, paid too much for the t-shirt. For a musical (based on a movie) that steals its title from Kirkegaard, I would like a little more substance. But where the musical fails to provide the depth that might make it interesting, reality goes ahead and fills the void. It seems one of the producers for the show is a Catholic Religious Order that is trying to think creative ways to survive. It’s numbers are dwindling as its average age creeps up (currently at 78). The order, the Passionists of the Province of St. Paul of the Cross, is selling property, closing retreat centers, and experimenting with how to reach out into a different world. Like the article says, the only way they are going to make their money back is through a miracle, but they are getting some press for their different kind of financial investment. The creators of the show find it funny that the Fathers invested in a show written by an atheist and three Jews. But, well, the Fathers are undergoing the same struggle that a lot of churches are and are asking the same kinds of questions. When the financial support starts to dry up, soul searching begins. In reality, a musical about the Passionists might be a more enjoyable thing. Like Jonas in “Leap of Faith,” they’re finding themselves in a tough spot. But unlike Jonas, I think the Passionists have a much more telling, rich, and interesting story.