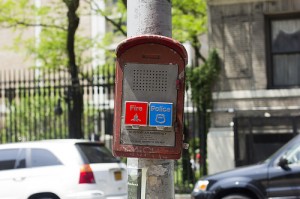 Tonight, I met up with some people from the internet to try and experience the first day of Manhattanhenge. Alas, at the last minute, thunderstorms moved into the area so my vantage point at 23rd street was a wash. As we said our goodbyes, one gentleman stuck out his hand and said “Good luck with the God stuff.” Good luck, indeed.

On Saturday, I sat in on a meeting at the Synod office that was taking a look at Latino ministries in Manhattan. I was encouraged to attend since I’ve been told that english-speaking Latinos are starting to get noticed in the ELCA and they are becoming a targeted demographic. The meeting took all morning and I really learned a lot. I won’t go into details because I’m not sure what’s confidential and what’s not, but I do want to talk about two approaches towards ministry that were brought up and that I can’t get out of my mind.

During the conversation, the topic of mission came up. Actually, the whole meeting was about mission but there came a point where the details came into play. And the group was split into how they saw themselves. Since we’re part of a church that tries to promote the welcoming others, there was a big push by some of the ministries to see themselves as primarily responding to the people who enter their doors. And, in NYC, this isn’t actually a bad conclusion based on demographic data, etc. As Latinos spread out along the subway lines into the Bronx and Queens, working out the logistics of where to be, matters. Opening the doors of the church and seeing oneself as primarily a nurturing kind of church – where the church is opened to everyone who walks in the doors (and if you are in Manhattan, people do walk into your doors), seems a natural expression of some of our theology. As much as it seems like a passive form of ministry that only takes care of those within its walls, in an active environment like NYC where people go across rivers (and state lines) to visit churches, this isn’t actually a terrible idea. Churches can live this way. And there are churches that thrive in this environment. And if I look at my first two years of seminary education, this is exactly the kind of church environment that I am being trained to be apart of. CPE, Pastoral Education, basic biblical survey courses, and the like, all lead to me being embedded into a church environment that has open doors, takes cares of people who enter the congregation, provides active mission support to the wider church, runs food programs, marches in political rallies against societal injustices, and all that good stuff that the mainline churches seem to do. But the more I think about it, the more I think that training isn’t quite right.

The other side of the discussion at the meeting was focused quite a bit on what it means to reach out and be active in the areas where latinos live. There was vague words thrown around like “boots on the ground,” “going out there,” “meeting people,” and all that. And I realized, while sitting there, is that I don’t really know what that means. I mean, in my head, I can kinda imagine what that might look like but I don’t really know. There’s been nothing in my seminary education (so far) about that. We talked quite a bit about going out and preaching the gospel. And since we’re good Lutherans, we spend quite a bit of time focusing on what we say when we go out there and speak. That is a practical detail that matters. But how to speak? That doesn’t seem to come up as much. Like, if I was asked to go into the Lower East Side that is inaccessible to subways, to reach the heavy latino populations out there, with my boots on the ground, what the heck does that even mean? What would it look like? How would I do it? I don’t really know.

I’ve got some ideas, of course, but all these ideas are rather new. I’ve watched my home pastor work the neighborhood in away that I envy. He talks to people on the street, visits local businesses, and is a visible presence. He’ll wear his collar, is called father all the time, and still takes time to chat with the waiters at the local dinner or the young family walking their dog and inviting them to the Blessing of the Animals service. That’s one way to do it. But would that be enough? Hmm. I’m not sure. I’m sure there’s more that can be done that would do more than just get butts in the pews.

For the Latino ministries to grow in Manhattan, I think they’re going to have to actually go outside. Some will come in the doors but not enough. And I think Latino ministries can get bogged down and subsumed under wider cultural realities of the Metropolitan New York Synod if they are not careful. I’m curious to see how english-speaking Latinos are taken into account. I didn’t hear them mentioned much in the meeting. But, at our Synod Assembly, during the Project Connect presentation about raising up new leaders from within congregations – there were two english-speaking Latinos looking at a sea of white faces. We’re kinda already here and we’re being pulled into leadership positions already. But that’s not an excuse to wait for us to show up at the door steps. We’re out there and as a church, we should just be incarnational, and get on out there.