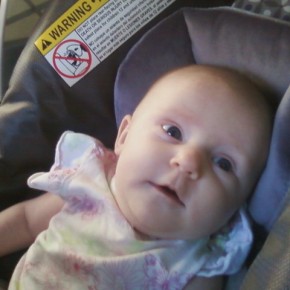 A few days ago a friend called me up to see if I would like to go to the Cloisters with her and her newborn babe. Now, this is embarrassing to admit but even though I have spent more than half my time in NYC in Washington Heights, I have never been there. We set a time and a date (and it helped that she was bringing over some extra babby stuff she received) and she offered to drive me. I was excited.

Now, she arrived, gave me a call, and I headed down the stairs. When I got outside, she was in the backseat of her car. It seems her newborn had decided that she hates to be in the backseat of a car all alone and was having a meltdown. There were tears (which were new), moaning, yelling, crying, etc. Nothing seemed to calm her down. She would calm herself, seem okay, and then get herself excited all over again. I tried jingling my keys, which only worked for a moment, and tried to make funny faces at her. But alas, only time with mom seemed to work. We never made it to the museum but during the forty minutes we tried to soothe the babe, I learned a new things. I first learned that I was the first person to see her meltdown – she had yet to do that (hopefully that is not my effect on babies). My friend was also filling me in on all things she kept calling her pediatrician about. It seems newborns get acne, seem to breath in a fashion that makes them hyperventilate, lose their hair, sleep with their eyes partially open, and do all sorts of things that are going to freak me out. I feel like some of this information is in some of the half-dozen books I’ve read but not all. That whole eyes partially open thing? Totally wild and freaky. I’m not sure I really want to walk by my kidling’s crib to see his eyes darting about as he sleeps. I’ve watched enough Supernatural to know that is never a good sign.