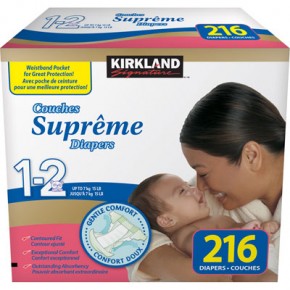 Oliver finally worked through his first box of diapers earlier this week. Our first box was a gift from a friend, Pampers Swaddlers 1-2. Our new box we bought months ago during an early nesting phase from Costco, Kirkland Supremes 1-2. Our little guy seems to be fine with either one – he’s not picky and doesn’t mind going when he needs to go. But after a few days, I’ve decided that I have a diaper preface. I never thought I’d actually have a diaper preface. When I decided to go into the whole being a dad thing, the thought of developing a diaper preface never occurred to me. I mean, I thought I’d start liking different products but actually having a preface for a diaper? Sheesh. No way. I was more considered about making sure Oliver develops a dinosaur preface like his dad. But, here it is, I actually have a preface on infant diapers and I’m squarely in the Pampers Swaddlers camp. If you have a baby coming in your life and you are going the disposable route, give them a try. You might like them. 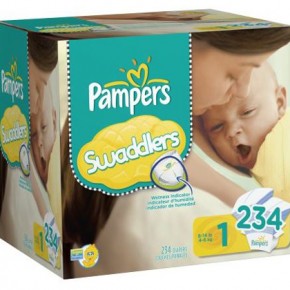 And why? Well, first off, the Pampers adhesive latching system is back to front rather than front to back. This means that you get to lock and load your baby without having to play the game of lifting or moving your kind while latching the the diaper closed sight unseen. Since there isn’t a parenthood Olympics, aiming for a blind landing like a gymnist or a diving champion doesn’t make much sense. Why make your life harder? There’s no one with a scorecard next to the changing table looking at your execution score. And if there is, well, just keep your legs tight and together. The judges notice that.

Now the latching system is great but probably the best thing about the Pampers is that there is a slight line on the outside of the diaper that turns green when the diaper is wet or soiled. That is also the worse thing about this diaper as well because you will always know when the diaper is dirty. Oliver’s diaper is basically accusing me of being a bad parent if I see that line slightly green and I ignore it for a bit. Sure, the baby doesn’t care sometimes and it might not be totally soaked, just a little damp, but that diaper is pointing its big green finger at you and saying CHANGE ME. CHANGE ME. CHANGE ME. And when it is three a.m. in the morning, having Oliver’s diaper yelling at me is not really what I need in my life. But if you do, the price for Pampers at Amazon isn’t too shabby at 19 cents a piece. But can I get away with having diapers delivered to my internship site? Probably because I already have. Nothing like opening up a box containing a giant thing of diapers infront of parishioners. I recommend it if you haven’t tried it.