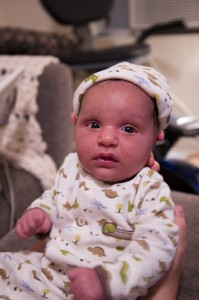 Oliver, like most babies, has his very own witching hour(s). We’ve learned how to shorten it by taking him out for a trip in the evening. We’ll either go on a walk or go out to dinner or run an errand that requires us to ride the subway. Once he’s in his carrier, he is out and his time as fussy-mc-fussy-pants is reduced considerably. Tonight, after an ok dinner out and a trip to the grocery store, Oliver still arrived home with over an hour of his usual block of time available. He, of course, immediately went into his routine of being loud and cranky. still woke up with an hour and a half of witching time to fill. A plan was devised where K fed him, bathed him, and then Oliver was passed to me to entertain. I carried him but he still fussed. I did deep lunges but his cries didn’t stop. I even sat on the exercise ball and bounced around. He liked that, at first, but it didn’t last long. Even my patented move where we play Olympics (i.e. I put him on the bed face up and wiggle, move his arms and legs around as if he’s participating in various sports) only worked for so long. Oliver had a job to do and I was going to suffer for it.

Part way through it, K suggested a new tactic and said I should sing to him – that Oliver needed to hear a song from his daddy. Now, I don’t consider myself a singer and I have a terrible memory when it comes to song lyrics so I did what anyone would do in my shoes – I sung and stole made up lyrics to the song from my wife. Why reinvent the wheel if you don’t have to? And it was shocking – SHOCKING – how quickly Oliver calmed down once I began to sing. His lovable angry/cranky/i-am-so-tired-i-could-kill-you face became mellow and relaxed. He started to look around and began his personal wiggle and dance to the bedtime gods that he does every night before he falls asleep. Sure, he was still up for about 30 minutes but it was quiet. By the time 10:30 rolled around, he gave one giant burp, fussed for two seconds, and then passed out on my shoulder like he just gave up on life. I never realized that a lullaby that I sung would actually work on a baby but it did! I’m going to pat myself on the back for this one.

The song I sung was “The Wheels on the bus but with modified lyrics supplied by K and me. Repeat for 30 minutes. It seems guaranteed to work…at the moment at least.