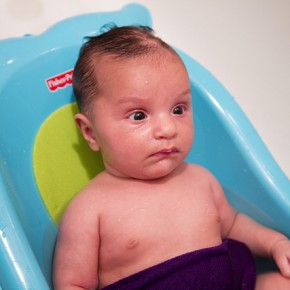 At today’s 9/11 Unity Walk in New York City (I’ll hopefully write more about the event latter), Oliver was a champ. He cried and freaked out like the best of them. I picked him up from home, wore him on the subway while wearing my collar (and reading Rad Dad), and we arrived in Washington’s Square park only 15 minutes after the event started! As we caught up with the group, we began our walk through lower Manhattan, arriving in one sacred space after another, listening to speakers from all sorts of faith backgrounds, and moving throughout the city. Oliver slept through most of the walk. That didn’t faze him. But it seemed that sacred spaces were just a little too much today.

One of the venues was in Soho. We found an unmarked door next to a restaurant being renovated. The door was opened and a staircase confronted us. After two long flights up, an opened door and a young woman welcomed me to enter a lovely room full of windows. But there was a catch – my shoes had to come off. I flipped off my red chucks, bent down with Oliver strapped to my chest (cuz I’m a pro), and found a lovely light blue shelf to put them on. I entered the room, looked around, and thought I was in a yoga studio. I mean…it just felt like it. It seemed a tad too…relaxed…to be in the middle of NYC, you know? It was beautiful with a lovely kitchen, lots of shoes, and it looked incredibly open, spacious, peaceful, with a large center piece decoration that was golden but not ornate. Then I noticed it. We weren’t just in a yoga studio – we were in an active hindu temple and before us wasn’t just a decoration, it was an actual deity. And as the group gathered, our speaker began to speak. And Oliver decided to lose his mind.

I know – I know. He was hot, hungry, and he woke up to discover himself face-to-face with the evil that is polyester blend clergy shirts. I would have lost my mind too. So, I stood in the back, and tried to soothe him. I got close. People didn’t mind. After the speaker finished, everyone said they were happy that Oliver was there. Some folks even took my picture (even though Oliver was cranky). But feeding him wasn’t working so I decided to change his diaper. I waited in line for the restroom and he kept melting down. Finally, once we were in the bathroom, and I began to change his diaper on the floor (and I’m still terrible at taking the Ergo off by myself and putting it back on), he howled. I mean, he howled. And it echoed throughout the temple. While I got him changed and rehooked on, I dreaded what I would see when I came out of the restroom. Would they all be staring at me? Would they think I’m a terrible father? Would my internship supervisor disown me? Luckily, everyone left the building, heading to a new place. It was just me, a screaming baby, a temple servant, and the deity. That deity. Staring at me. And Oliver kept howling. We left, and following standard protocal, he was quiet by the time I reached the fourth step down the stairwell. Whether Oliver was voicing a theological concern or just being a baby, I’ll never know. But that deity got to experience the meltdown that is Oliver. Welcome to the club big guy – welcome to the club.