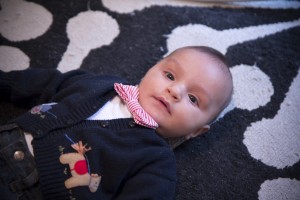 Oliver turned three months old yesterday and he decided to celebrate by wearing a bowtie, doning an Ivy League sweater, and visiting a Whole Foods in New Jersey.

If I didn’t know better, I would swear he’s trying to show up the snazziness of his dad.

Over the last week, Oliver has developed a few habits that are brand new. For one, he’s cooing at us a lot more. He loves having conversations with us and actually will get mad if we don’t include him in our wider conversations about pop culture, gossip queens, and who-is-being-wrong-on-the-internet at the moment. He’s kinda like a cat: he wants to be noticed but on his terms. Chula is obviously teaching him things when I am not around.

But beyond the conversations we’ve been having (and since it is near Halloween, I must quote Nightmare before Christmas by saying that we’re having conversations worth having), Oliver is starting to go to bed earlier but waking up more in the middle of the night. Like clockwork, he is down for the count by 10 pm and up at 3 am and 6 am for a feeding. I have no idea why he’s doing this but it seems to be a fairly normal part of baby development. And my poor wife, after feeding him twice, typically elbows me and tells me that Oliver is my responsibility the next time he cries (which he does, like clockwork, at 7 am). Luckily I have mountains of coffee to sustain me while my wife gets the rest she deserves.

Oliver is also learning what it is like living in a cold NYC apartment. Now that the temperature has started to drop into the 30s this week, and our landlord is refusing to turn on the heat, we’ve been struggling trying to figure out if he’s actually warm enough at night. Since he’s only 3 months old, we’re not letting him sleep with blankets yet. Instead, we’re wrapping him up in footie pjs, socks, and keeping him as far from the windows as possible. He doesn’t seem to complain about the weather but I have no idea if he even knows how to complain about being cold. He does know how to complain about gas, being hungry, and that there’s a dog licking his face so I’m assuming he’d get upset if he’s cold but he might just not know what that means yet. And this morning, when the temperature dropped below freezing, he seems to be napping comfortably. Babies – you just never know what they’re going through. I feel like I’m becoming a Will Smith song. Sorry Oliver, sometimes parents really don’t understand.