A sermon preached at Advent Lutheran Church on November 11, 2012 by yours truly.

The 9am sermon can be heard here:

For those of you who prefer your sermons in paper form, here is the final draft that I printed out (though I did modify it on my subway ride in to church slightly). 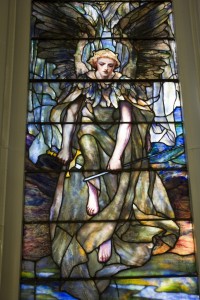 Starting to Happen
Please be seated.

Who is that poor widow?

I mean, for a person who only appears in one sentence in our reading today, she’s kind of a big deal. This is one of those quintessential bible stories ‚Äì one that even my un-churched friends know. And ‚Äì right now, across the country, preachers are talking about her, pointing to her ‚Äì and, no doubt, stewardship campaigns and yearly financial pledge drives are being started ‚Äì all because of her. This poor widow ‚Äì in the capital C Church ‚Äì she’s making an awful lot of noise right now.

But ‚Äì really ‚Äì what do we know about her? Well, she’s poor. Her husband is dead. And she’s in the temple complex on the day that Jesus – decides to be like a New Yorker having brunch on a nice spring day ‚Äì Jesus is people watching and he sees her, this widow, giving all she has ‚Äì and this….this has defined her ever since people started gathering together to talk about Jesus. Those two coins she tossed into the treasury box ‚Äì a kind of offering box in the temple complex of Jerusalem ‚Äì this is her defining and remembered act. And…well…that’s about all we know of her.

We don’t know her name. We have no idea where she lived ‚Äì what she called home. We have no idea if she worshiped in the temple regularly or if she’s back for the first time in years. We also have no word on why she’s a widow. I mean ‚Äì did her husband die from disease? Old age? Or ‚Äì since its Veteran’s Day ‚Äì was he a solider? Did he perish in some far off campaign or maybe from some old war wound that never healed properly? We don’t even know if she had kids ‚Äì or if she’s young or old. We know nothing about her except her class, her worth, and her act of giving on that day.

Now ‚Äì this isn’t suppose to be a stewardship sermon ‚Äì if you’ve seen the posters and read the letter we sent ya ‚Äì stewardship Sunday is next week – and I’ll let our preacher – Pastor Campbell of Broadway, UCC ‚Äì take care of that whole thing. But ‚Äì this tailored made text about giving ‚Äì it’s really hard to NOT see stewardship in it. I mean ‚Äì here’s this widow ‚Äì who in spite of having her property, dignity, her humanity, devoured by those who are rich ‚Äì she still gives all she has. In spite of having almost nothing ‚Äì and being in a position of pure powerlessness ‚Äì she still gives. We don’t know why she gives ‚Äì but it’s not hard to imagine that she had some deep faithfulness to God ‚Äì or hope ‚Äì and she…she gives. Her act ‚Ä¶ it’s inspiring; scary; challenging ‚Äì and it’s a reminder that what God values ‚Äì God’s ordering of the world ‚Äì doesn’t match our expectations or experiences.

But even though we don’t know her ‚Äì there is something else we know ‚Äì something I haven’t mentioned yet. We know that she was ‚Ä¶ that she wasn’t seen ‚Äì that she was invisible. She’s not flashy ‚Äì she doesn’t have the chance, the opportunity to make a dramatic entrance or scene. In the eyes of everyone there ‚Äì she has no value ‚Äì and ‚Äì with no value comes no visibility. So when she comes up to make her gift ‚Äì it is only Jesus who sees it. The other disciples don’t. They don’t come to Jesus saying “oh wow! We just saw this woman give everything she has!” No ‚Äì Jesus calls them over ‚Äì He tells them what just happened. Jesus sees her ‚Äì well ‚Äì actually ‚Äì Jesus sees all of them. He sees the rich who give large sums of money. He see the disciples who are milling about. And Jesus sees this poor widow ‚Äì with two coins ‚Äì make her deposit. She’s invisible ‚Äì invisible to everyone except for Jesus. And…and its not her act that makes her known to Jesus. Jesus is there people watching ‚Äì even before the poor widow arrives. He’s noticing everyone. And Jesus sees ‚Äì well ‚Äì he sees her. He knows she’s poor. He knows she’s a widow. He knows who she is, where she comes from, why she is who she is ‚Äì before she acts. Before she gives. He doesn’t conduct an exit poll to discover who she is. There’s nothing in the text to show that this widow even saw or noticed that Jesus was there at all. But Jesus…Jesus saw her. And I think ‚Äì I think that’s when her identity begins.

Now ‚Äì sometimes ‚Äì not being seen ‚Äì that’s awesome. Personally, there are times when my four month old son Oliver ‚Äì well ‚Äì he’s gotten to the age where he cries, loudly, when he wants my attention. He’ll want to sit on my lap ‚Äì like when I’m trying to write a sermon ‚Äì and put his whole hand in his mouth ‚Äì and just happily suck away. He wants me to see him ‚Äì but ‚Äì well ‚Äì that doesn’t fit into my schedule. So, I do what all two parent households do ‚Äì I dropped him off with my partner. At that moment ‚Äì I’ve got a choice ‚Äì and the opportunity to not be seen ‚Äì and I’m gonna take it and use it as much as I can.

But there are times when not being seen is one of the worse things in the world. When we’ve failed at something ‚Äì or we’re suffering through a broken relationship ‚Äì illness ‚Äì a broken promise ‚Äì or any number of things that can make us feel completely isolated and alone ‚Äì being unseen is terrible. And even in a city as populated as New York ‚Äì when you’re on the 2 train in the middle of rush hour with your face in someone’s armpit and with a bag jammed into your back ‚Äì it is so easy to be completely invisible.

And this extends beyond a personal level ‚Äì this lack of visibility is part of our culture too. Those folks who are too inconvenient because they don’t fit our norms ‚Äì because they’re not wealthy enough, or they don’t love the right way, or their skin color is just a tad too dark ‚Äì or maybe they’re too hungry and too poor ‚Äì they can be made invisible too. One of the sharpest examples can be seen in what happened after Hurricane Sandy. Those of us, myself included, who didn’t lose power ‚Äì our lives returned to normal. Our subway trips, while disrupted, came back eventually. It’s easy to think that everyone else is back to normal too ‚Äì but they’re not. There are still those without heat, without gas for their generators ‚Äì basements still flooded ‚Äì homes still destroyed ‚Äì lives still broken. Their narrative doesn’t match our own ‚Äì and the busyness of our lives push our broken neighbors to the side. They disappear. They are the un-seen.

But that’s not what Jesus does in our story. He sees them. He notices them. He gets who they are ‚Äì before they act. Before they do anything. And Jesus sees us too ‚Äì in all that we do ‚Äì and in all who we are. And he sees us because he promises to. He promises to be the ultimate people watcher ‚Äì living in creation, in community, with people ‚Äì in all their brokenness and all their joy. God came down to live ‚Äì to watch ‚Äì to teach ‚Äì to reveal ‚Äì to transform ‚Äì and, well, to love.

On this ‚Äì the anniversary of Martin Luther’s baptism ‚Äì I’m reminded of one of my favorite quotes by him ‚Äì that we are invited ‚Äì called really ‚Äì to be little Christ’s to one another. This doesn’t mean that we’re suppose to see a beggar and give them our cloak because that might be Jesus playing some kind of game with us ‚Äì no ‚Äì it means that we are to be like Jesus because Jesus keeps on being Jesus to us. He continues to see us. He continues to join with us in our baptism ‚Äì in the meal we’ll share around his table ‚Äì a meal that is open to all ‚Äì that sees all ‚Äì and the pastor and chalice bearer will say that this bread and drink is not just a symbol ‚Äì or something that is pretend ‚Äì but that this really is Jesus, right here, right now, for you. Capital Y-O-U because you are being seen. You are being known ‚Äì whether you are a child or one of our older, wiser Lutherans. You ‚Äì all of you ‚Äì your fears, worries, joys, hopes, your dreams ‚Äì all of you ‚Äì the Lord truly sees you.

So like Jesus on that day ‚Äì on that day when he sat in the temple complex ‚Äì he still watches people. He sees all of us. And we are invited to see everyone too. White or brown, gay or straight, democrat or republican, young or old, man or woman, rich or poor ‚Äì we are invited to see everyone. To be in relationship with all of them ‚Äì especially the unseen ‚Äì the marginalized ‚Äì the ones we don’t see. And we’re called to love them. To start to love ‚Äì they must be seen ‚Äì and known. We are invited to notice. We are invited to pay attention ‚Äì even when our sisters, brothers, neighbors ‚Äì even when their names are no longer in the papers ‚Äì we are invited to be in relationship in the long term ‚Äì and to not give up on all who need to be seen. Because we are seen. We are known. Our identity rests in that Jesus, he, who sat in a temple complex and watched the world go by. He saw them; he sees us ‚Äì and we are called to be a people of see-ers. So lets go see.