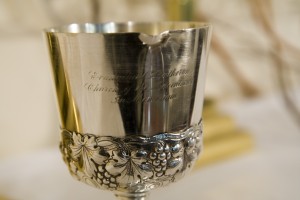 Today, on this Christ the King Sunday, the last Sunday of the church year, I presided over the service. That means I did the entire service (minus the sermon) except for the words of institution (I don’t have “the magic fingers” quite yet). I even sung various parts of the liturgy which isn’t typically done at my internship site. It went fine and was a lot of fun.. I made two mistakes (forgetting to invite everyone to stand up at the start of the 9 am service and, during the 11 am service, skipping over the Lord’s Prayer during communion – had to backtrack on that one) but it went pretty well. I’m grateful for the experience and the chance to try it out. And it’s funny because, well, I’ve led services before. I’ve even been paid to lead an entire service, minus communion, before. But setting up and leading through the meal – that was a first. It went pretty much how I expected. What I didn’t expect, however, was how I would feel afterwards.

I’ve never been this tired after church in my life.

So, after arriving at church before everyone (except the sexton) to setup the altar and prepare the classrooms for Sunday School, I presided over a service. Then I lead several Sunday School groups. Then I presided after another service and mingled with everyone at the end. I wore myself out. I don’t consider myself to be a solid introvert – I actually am energized hanging around other people – but standing up there for two services, and leading Sunday School… it was exhausting. It’s physically tiring – standing as the focal point for the spiritual energy of the entire congregation – emotionally tiring, and spiritually exhausting as well. I felt so much energy radiating out from me that I felt sucked dry afterwards. None of this is bad, however. I actually liked it. If I had a cup of coffee and a bite to eat after the services, I could have gone to countless church meetings and thrived. But I didn’t have a chance to recharge – so I was exhausted.

As I took the subway home, with my sleeping baby strapped to my chest, I wondered if seminary should look to Broadway for some of its training. I know of actors and actresses who train by running on treadmills and singing – increasing their endurance to perform 8 shows a week. Seminaries should get their seminarians, load them down with cassocks, albs, and chasubles, and have them sing the liturgy while taking spin classes. Not only would it be a hilarious sight to see, but the seminarians would be in pretty good shape after it was all said and done. I’m putting this idea out into the universe. Someone pick up on it and run with it. This…this could work.