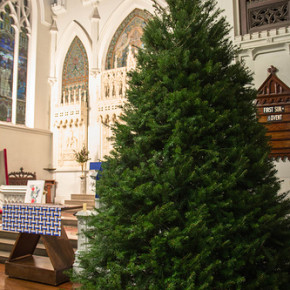 Why start our Christmas story ‚Äì about the birth of this little Jewish boy ‚Äì born to a dad named Joseph, a young mother named Mary, in the small town of Bethlehem ‚Äì why start it, a thousand miles away, in Rome?

Because that’s where Luke starts the story ‚Äì with a decree made by the Roman Emperor Augustus that the world should be registered. Scholars disagree on whether this actually happened ‚Äì but I think it’s more important to ask why Luke starts in Rome ‚Äì and not in Israel; or Jerusalem; or, well, anywhere near Bethlehem. We end up there ‚Äì but we start, first, in Rome. And, to be perfectly honest, this Christmas, I haven’t really thought much about the Roman Empire. Well…actually…that might not be true. I think I did order a Caesar salad recently. And I thought about ordering a pizza from Little Caesar’s ‚Äì you know ‚Äì one of those five dollar deals – but…that’s about it. For me, the Christmas story never stars in Rome ‚Äì-

That Roman Empire ‚Äì it stretched from Europe, through the Middle East and Norther Africa ‚Äì we’ve seen the movies I bet ‚Äì with the huge shiny soldiers ‚Äì shinning golden bright ‚Äì with long red capes, huge biceps, sharp swords and spears ‚Äì and with that armor that gave them the allusion of chiseled and perfect six pack abs. And that helmet! With the large red plume ‚Äì like some kind of gold, bright, shiny, rooster ‚Äì if I was wearing that complete outfit right now ‚Äì I’d probably be twice as tall as I am. Or, at least, I’d look like I was. I’d look strong ‚Äì mighty ‚Äì tough ‚Äì maybe a little ridiculous ‚Äì but I’d look powerful; like a soldier; like a fighter ‚Äì like someone that can protect you. If I was standing up here, with my bright armor, sword, giant spear, and red helmet ‚Äì standing right next to baby Jesus in our Nativity set ‚Äì that scene would send a much different message that we see, right now, with that beautiful tree, right there.

And that image ‚Äì of the Roman soldier ‚Äì that image is important to Luke. In Luke’s day, fifty years after Jesus died and was risen from the dead, Rome had just put down a rebellion in Israel, destroyed the temple, and its armies were spreading throughout Syria, Iraq, and Turkey. Rome wasn’t invincible ‚Äì but it carried itself like it was. As the armies marched forward, factories back in Italy were stamping out statues and paintings ‚Äì images of Rome and the Emperor ‚Äì and shipping them all over the world. These images were Rome’s advertisement ‚Äì delivering to everyone this idea that the Rome was strong ‚Äì powerful ‚Äì fantastic ‚Äì someone that deserves your respect, love, obedience, and hope. And all that hope centered in one person – the Emperor of Rome.

Our most famous image of Augustus ‚Äì the one you’ll see in books ‚Äì was made when he was older, partially blind, and sickly. But in that statue ‚Äì he’s wearing huge armor, he looks ultra strong, and young. He’s the model of what an Emperor should be ‚Äì able to conquer our enemies, feed those in need, and lead troops into battle and to win victory after victory. And this was another image stamped out in factories and delivered all over the Empire ‚Äì an image that was meant to be placed in homes, in marketplaces, in temples ‚Äì an image meant to be worshiped and glorified. This guy ‚Äì this manly man ‚Äì that was where we are to place our hope, our faith, our trust in. He is worthy of your love. He is the man you are suppose to listen to ‚Äì who will help you ‚Äì who will provide for you ‚Äì who will protect you. This guy is the hope of the entire world.

And Luke flat out says that isn’t true.

The story of Jesus’s birth is never just about a baby; the story of Jesus’s birth is about our expectation of what Hope should be. We expect Hope to fit a certain image ‚Äì to be a certain way. The Emperor of Rome stamped and delivered images of that Hope all over the Empire ‚Äì a hope that was grounded in the power that money, weapons, and politics can bring. And everyone expected that this is who the savior should be. Of course the savior would be a soldier ‚Äì of course they would be able to raise troops and money and wage wars ‚Äì because how could a savior not do that? How could a savior not have the experience, the knowledge, the power to fight all the battles we need that savior to fight? To fight against those who oppresses us? Those who look down on us? Those who treat us with contempt and teach us to hate ourselves? The Savior has to come ‚Äì has to come ‚Äì with the strength, and power, that we don’t have ‚Äì to match power with power ‚Äì to defeat all of that. That’s the only type of person that could truly save us ‚Äì save all of us ‚Äì from the world and from ourselves. No newborn babe can do that.

[Insert an off-the-cuff sermon illustration about a little toddler who ran up to me during the sermon and baby Oliver, who was sitting in the back.]

I think…rather than having a fifteen foot tree overlooking Jesus – a fifteen foot Roman soldier might be a better image ‚Äì because that’s what is happening on this day. Our vision of salvation ‚Äì that which we build ‚Äì that which we believe gives us hope ‚Äì that which we think God wants us to believe ‚Äì that is being confronted, right here, by a newborn babe. The meeting of our world with the divine is not in war; not in weapons; not in money or power; but in a baby. On that day ‚Äì and on this day too ‚Äì this is our good news ‚Äì and our great joy ‚Äì that in the little town of Bethlehem, this town where no power resides, where no giant army is stationed, where no Emperor lives ‚Äì Jesus is born, right there. Glory to our God in the highest ‚Äì for coming not as an adult, or a giant, or a golden, armored soldier with a sharp sword, and a long spear. No ‚Äì Jesus came to us delievered in bands of cloth ‚Äì swaddled ‚Äì powerless ‚Äì weak ‚Äì in need of love, care, and parents who would protect him. The Savior comes into our midst ‚Äì a soldier and Emperor of a different sort ‚Äì an Emperor that we do not expect ‚Äì and for that, may all of God’s people say Amen.