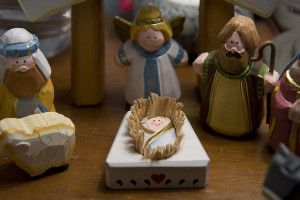 So, I’m not sure what to make of this.

That’s the long way around to the question I want to pose: How much has contraception contributed to the emasculation of men and to men’s shrinking roles as provider and protector?
…
Men in this day and age are rarely encouraged to procreate freely; they are asked to step up to the plate a couple of times and then are sort of put out to pasture, for lack of a better term. Their role as father is never fully realized (nor is that of the mother but that is another discussion) ‚Äì it is always held in check, restrained and controlled and eventually severed, whether surgically or otherwise. Have women been emboldened, and deep inside do they look down upon men, who allow this manipulation of their progeny? And have men in turn been weakened ‚Äì and have they become intimidated by the huge but beautiful responsibility of providing for a family ‚Äì due to the false sense of control contraception gives, and with it the temptation to avoid heavy family and financial burdens?
…
From this total control of reproduction comes an inflated sense on the part of the parents of their role as the sole creators of life. This is, no matter how sweet the family, a form of arrogance, at the bottom of which is a lack of understanding that they are called to be not the sole creators of life, but co-creators with our Creator himself, a very humbling acknowledgement indeed.

Mary’s observations are quite penetrating. They put forward in a formal way something I have often observed casually over the years. Men who are fathers of several children, especially those who have been openly living the Church’s teaching against contraception, gain a confidence and ease in their masculinity that does not seem equaled by others. These men seem aware of their power. This leads to a confidence in, especially, how they relate to their families and how they discipline their children. Of course this is a generalization, but it would only stand to reason. A man who has not denied his masculine procreative power is a man whose virility is evident to the world.

A man who has not denied his masculine procreative power is a man whose virility is evident to the world.

Where do I even begin?

So this is the second draft of the blog entry I was planning to write. I spewed around 2000 words and realized that it was getting too long. There are so many underlying assumptions, social and theological, in this little nugget of joy, that an argument can easily develop into an attack on ALL THE THINGS. But I don’t have time to attack ALL THE THINGS. Instead, I will focus on one.

As a Lutheran Christian, my lens is, well, biased in a certain way. I am fine with that. In fact, I am more than fine with that. The Lutheran lens is freakin’ fantastic and I think that EVERYONE IN THE WORLD should be in on it. I know that is a false wish and hope but I just find it so wonderful – I can’t help but share it with everyone.

Part of that lens, then, is to take the Jesus event very seriously. The lens, in a sense, requires that Jesus not be made unnecessary. And that thread runs deep in every aspect of Lutheran thinking and thought. That is also the driving force behind the piece of Luther’s thought that I repeat all.the.time: we are called to be little Christs to one another. That is our job; our vocation. If you’re baptized, that’s a big part of your job description as a Christian – be a little Christ to those around you – to everyone around you – no matter who they are. Of course, as a sinner, this is ridiculously hard to do and hard to get right all the time. But, with the help of the Holy Spirit, the love of God and Christ, and through our gathered communities and the wonderful gift that is faith, we pray that God will turn us into these little Christ’s. We sometimes need help getting there – and sometimes just having the thought that we are supposed to be little Christ’s is the Holy Spirit’s way of challenging and changing us. So, in big, bold, letters: little Christs. That’s our job.

The wild thing about that calling is that it does not rely on a gendered form of vocation and identity. The arguments detailed about manliness, contraception, feminism, etc, etc, are not God-given boundaries on vocation. Rather, the call to be a little Christ – to be a free gift to those around you – to truly engage with, know, and love those around you – is a vocation that all, no matter sex or gender, are required to do. Vocation is not restricted to biology or cultural norms. Vocation starts with, and through, Jesus. God is not limited by our limitations.

Does that mean that culture, society, government, and other such things do not matter? Of course not. We all have very many different kinds of vocations – vocations that help us earn money to live – and other vocations (parenthood, being a student, being a kid) that are parts of our identity. Those vocations might change and they can be culturally and socially defined. That’s okay. But, from the very start, through our baptism, we are called to be little Christs. We’re not called to be little men or little women at the expense of being little Christs. We’re not called to mistake social order as the limit of God’s imagination and the limit to our calling. We’re called to LOVE first – and this calling underpins all other callings. Although the blog entry above does not start there, overtly, it sounds like it does to me. It sounds like it begins with biology, with creation, and then moves to faith and spirituality. But that’s not where my lens begins.

This doesn’t mean that I think the conversation about gender identity are meaningless. I think that it’s an important one to have. But the question of manhood is not a question of worth. An argument that tries to combine Christian calling, vocation, and identity with an argument of social norms in relation to contraception won’t work. An argument about contraception is fine. An argument about gender identity is fine. An argument about Christian identity, vocation, and how that interacts with gender identity and contraception is fantastic. These are conversations we need to have. But to claim that contraception limits maleness or virility, through a claim of the “Church” is just downright silly. By that argument, Jesus, as fully human and fully God, who walked among the world, who interacted with men and women, slaves and free, rich and poor – who’s martial status was never defined, who’s parenthood is never stated but who has historically be seen as single (and loving it), would, in the guise of this conversation, not be virile. He would be sub-man and, thus, sub-human. And that’s just silly. The reconciler of the world, the ultimate provider, the ultimate protector, the head of the church, the savior of the world…. actually, you’re totally right. There is nothing “manly” about that guy – at least how “manliness” is defined above.

4 thoughts on “A completely unmanly Christianity”