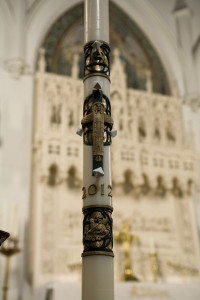 Yesterday, I assisted in a funeral, and, for the first time, it was a funeral for someone I knew.

And it was a very strange funeral. The person who died was a distant friend/relation to the congregation. She grew up there, kept in touch with some of the people, but she had such a wide circle of friends and people she worked with, that the pews were filled with people I didn’t know. There were young people and old; people with families and people on their own. And the urn, containing the ashes of the dead women, sat in the front of sanctuary, with a large bouquet of flowers in front, and the lit paschal candle standing behind it.

And it was probably the most silent church service I have ever been too.

It was a strange experience to be at a service, a service that had around 70 people in the pews, and for it to be so quiet. The hymns that were sung were well known. The organ, rather than the piano, filled the air. And there were some good singers in the congregation. But the people in the pews were the unchurched or from different faith traditions. They didn’t know how to use a hymnal, and even when we explained it, it didn’t seem to click. People seemed afraid to sing so I tried to sing louder – a hard proposition for a vicar who is suffering from a cold that is causing him to lose his voice. It was…. unnerving. I’m use to the sanctuary space, even for services of 10 people, to be filled with singing voices. A Lutheran service without the sound of singing, even bad signing, just isn’t right.

The service was so, so quiet. It unnerved me. There was no celebration of new life, of the resurrection, or even the dead woman’s life, it seemed to me. It felt like we were sitting in the morgue. just looking at her, and talking a little bit. That’s not how I like my funerals.

There were also some other elements that made the funeral interesting. Six eulogies were delivered. One women tried to sneak in her own interfaith tradition into the service and wanted the last word – but two homilies by the two presiding pastors stopped that from happening (“Never give anyone else the last word,” my supervisor told me later). There seemed to be an aura of energy trying to keep this from being a Christian service – a reflection of the people who were there, no doubt. And not that I don’t understand that. These were people with their own traditions, their own ways of processing and relating to death. They were processing this event in their own way. But the funeral was a Christian funeral for a woman who was baptized and considered herself a Christian, to some degree. It was hard to keep this funeral about her.

There was also a few other strange things. Some visitors, for religious reasons, would not enter the sanctuary, but we could see them watching through the doors that lead to our fellowship hall. I helped split the ashes, and ended up filling my lungs with the stuff (it took me a few hours to finally feel like my airways were cleared of ash). And, once the funeral ended, I met with a group of pastors to plan our Confirmation Camp for our confirmation kids. From death to new life, from death to a bunch of kids running around on a ropes course in the woods…. there’s a metaphor in there somewhere.