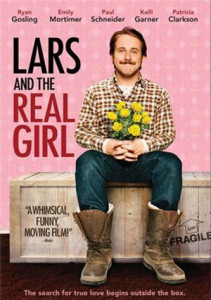 Today is Sick Saturday at my house. The cold that clobbered Oliver earlier the week has floored my wife and I. She recovered a little faster than I because she took some days off work. I didn’t. I can now barely function before entering a coughing fit and she’s going to an off-broadway show tonight. I think she made the better choice.

While the kid napped this morning, I turned on “Lars and the Real Girl,” a movie that first premiered in 2007 that I had yet to see. Even though I never saw the movie, I do have a long history with it. You see, when I did my psychological testing to enter the candidacy process of the ELCA, I wrote a short story based on the movie.

I’ve asked around but it seems the the testing I did was a little different than other candidates for ordained ministry. Besides the standard 800 question multiple-choice-fill-in-the-bubbles test, I was asked to look at six different pictures and write a short story about each. All seemed to depict random scenarios and I don’t really remember what I saw, or wrote, except for the one story where I decided a Real Doll needed to be involved.

The picture was old, possibly printed in the sixties, and in black and white. The image showed a young man, college aged, with a ridiculously out of date outfit. He was covering his eyes in sadness. He was standing in what was obviously a bedroom. The window was open, the curtains were blowing, and the bed was unmade. Only part of the bed was visible – revealing the thin wrist and hand of a young woman hanging over the edge of the bed. My first thought was that I was being asked to talk about some kind of death. Did he kill her? Did someone else kill her? Or is he just disgusted that she was drunk and passed out? Was she at a frat party? Basically, every bad after tv school special and movie ran through my head. I felt like I was being asked, no, required, to tell those cheesy stories once more. But then “Lars and the Real Girl” stepped in and saved the day.

I knew the basic premise of the movie – that a man buys a Real Doll and starts to introduce her to his friends as his girlfriend. That served as my inspiration. The young man in the story was looking disgusted because he accidentally walked in to his roommate’s room and discovered his roommate’s new “friend.” Death wasn’t involved – just something that played on internet stereotypes and nerddom that I live in. It was great. I remember laughing while I wrote it. I had a great time throwing it together. I felt like I had beaten the obviousness of the task at hand. Instead of just doing what I thought I was being asked to do, I instead took the story and turned it into something that I enjoyed. I remember patting myself on the back when it was finished and continuing on to the next image.

Later, when I met with the psychologist to analyze my results – she didn’t say much about the stories I wrote. She did say that they were well written and imaginative. I think she thought my descriptions were good as well. But, and this is what I truly remember, she thought I was being dismissive of the entire thing. She said that I seemed to have fun at the expense of the test – and that was something I’d need to watch out for, going forward. I’m still not sure what that meant. And, when I read her final written report later (which was only a few pages), I’m still not entirely sure about many of her observations. But I do remember “Lars and the Real Girl” and I’m glad I finally sat down and watched the movie. It was better than I thought it would be – and more touching than the story I wrote several years ago.