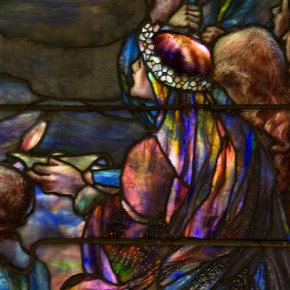 Preached at Advent Lutheran Church. At the 11 am service, six young persons were confirmed.

I’d like to time travel for a bit, if that’s okay. Two years ago, right here in the sanctuary, sitting in a circle of chairs, a group of young persons here at Advent invited me to lead them in their early Confirmation classes. We started by looking at the first books of the bible, Genesis and Exodus. The story of creation, the story of Adam & Eve and the reality of sin ‚Äì we were hitting the big questions right at the beginning. And we knew they could take it. But we wanted to make sure that all questions, big or small, silly or serious, would be welcomed in that space. And I remember…in all honestly, I think I said this a dozen times in our Confirmation classes ‚Äì I remember looking at these young people, when the conversation got quiet, when there was a lull in the teaching, I remember asking them “do you have any questions?” And I then did…I did what teachers, bosses, mangers, have done countless times before me and will do countless times after me, I said with a straight face “there are no stupid questions!”

But has that ever actually convinced someone to actually ask a question? Because questions are strange beasts; once they enter the world, they take on a life of their own. There’s the question asked about our math homework that shows we actually didn’t understand last week’s assignment. Or the question in our World History class that receives snickers from our classmates once they hear it. Or the question a politician asks another during a debate that is a question designed to make their opponent look silly, ridiculous, make them look utterly wrong. I don’t think it takes long for us to learn that questions can easily be more than just seeking information about something we don’t know. Questions can have bite, emotion, consequences. There might not be any stupid questions but there are definitely questions that, if we ask them , cause all sorts of problems.

And that’s what the Sadduccees were doing in our Gospel reading today. They were asking Jesus a ridiculous question, knowing that Jesus would give them a ridiculous answer, making Jesus look silly. Jesus’s answer would make the right kind of people just ignore him. That was the plan. But what they didn’t expect was Jesus’s real answer ‚Äì an answer that revealed God’s unbelievable, undeserved, almost ridiculous, love for each and everyone one of us.

In Jesus’ day, the world of Israel was a politically and religiously diverse place. The Roman Empire stood at the top of the political heap, with puppet kings below to oversee the local happenings. And religions flowed, moved, and were in constant contact with each other. The Roman Empire itself was just getting started with elevating their emperors to be gods and they had a huge pantheon of gods such as Jupiter, Mars, and Venus. The Jewish community of Israel was split into different groups. There were the Pharisees, the Sadduccees, the Essenes, and other sects within First Century Judaism. The Sadduccees were, most likely, the sect in charge of the Temple in Jerusalem. They were associated with the rich and wealthy, and focused their faith on the first five books of our Bible. One of the big differences between them and the Pharisees was the notion of the resurrection ‚Äì of what happens after a person dies. Jesus, in many ways, lines up with the teachings of the Pharisees ‚Äì so the Sadduccees, when they see Jesus roll into town, call him out. They decide to test him ‚Äì to cause him all sorts of problems by making him answer a ridiculous riddle.

They’re asking him a “gotcha” question of their day. So they come up with the scenario of a woman who marries a man with six brothers. But, eventually, he dies and they have no children. Following the custom of levirate marriage, the woman marries the next brother in line, the idea being that the children from this marriage will grow up with the name and rights of the older brother who just died. In a society where women had few options, making sure assets of the family weren’t lost if an heir wasn’t produced and some widows weren’t tossed out into the street ‚Äì that was important. So, this woman marries her brother-in-law and, well, then he dies and there’s no children so she just cycles through and marries the next brother-in-law. They keep dying, she keeps marrying, until she married them all and finally she dies, with no children and no heirs. And the Sadduccees ask Jesus their question: in the resurrection, in the world to come, just who’s wife would she be? She has seven options! Does she get to pick? Is it random? Is there a version of the “Bachelorette” with a resurrected version of Chris Harrison as host? In the world to come, just what is going to happen?

And Jesus just cuts the question at its knees. He doesn’t answer it. He doesn’t even accept their basic premise. He takes a step back and looks at what they’re truly saying, how they’re truly characterizing the resurrection ‚Äì as if the resurrection is just a copy of life on earth as it is ‚Äì maybe its a little nicer ‚Äì maybe its subways run on time more often ‚Äì and maybe the coffee just tastes a little better and your soda pop never goes flat ‚Äì but the resurrected life is just like now; where institutions are the same, morals are the same, the rule of life is just the same. Everything is just the same as it ever was. Jesus sees the Sadduccees big question not being about a woman in a riddle; Jesus sees what they’re really asking ‚Äì they’re asking about the nature of God’s relationship with God’s people; God’s relationship with us; they’re asking just when does that relationship ends?

And Jesus says “God is never through with you.”

Even in death; even in silence; even if you feel turned away from God, God is never through with you. The resurrected life isn’t a repeat of the life before with maybe better clothes or better hair. No, the resurrected life is something brand new. It’s something beyond what we can even think of. The resurrected life isn’t limited to our expectations, it’s so much more. The woman in the riddle is going to live differently, be different, experience a whole new reality, embraced fully in the presence of the God of the living. And her husbands too. The institutions right now aren’t the limit to God’s imagination; there will be oh so much more.

[At the 11 am service / In a moment], we’ll invite six young people to come forward to be confirmed and to make a public profession of their faith. And we’re also inviting them to know that we love them, care for them, and, above all, know them. They’re going to stand up here and make known the reality we all share ‚Äì that we are all living in that big question ‚Äì about living a life with a God who is never through with us. In the times of doubt, sorrow, lost, and pain ‚Äì God is not through with us. In the times of joy, happiness, laughter and smiles ‚Äì God is not through with us. And even in all the times in between, God is never through with us. We’re never alone because God claims us as God’s own. In the saving work of Jesus on the Cross, when God’s love for the world and for you and me was seen, felt, heard, tasted, and touched ‚Äì God showed us that we belong to God, even if the world tries to tell us we don’t. We’ve been baptized into Christ, into his death, and into his resurrection ‚Äì his present resurrection ‚Äì not some resurrection to come but in the right here, and right now. That’s the gospel, that’s the gift that is given to each and everyone one of us, everyday. That we are not alone; that we are loved; that God knows us even if we feel like our pain, hurt, and tears can never make us known to anyone. We all live in the big questions; we all live wondering what to do with this God who is never through with us. And we’ll never fully have all the answers. And that’s okay. It’s okay to doubt; it’s okay to not know all the ins and outs; it’s okay if you even don’t have ten commandments memorized or the books of the bible memorized either; it’s okay to get it wrong. God can take it. God can handle it. Just keep on living in that big question ‚Äì wherever it takes you. God will love you. Jesus will be there with you. The Holy Spirit will nourish you. And, with Paul, we can gladly say to our confirmands, to each other, and to everyone in this community of faith, and even to ourselves: “Now may our Lord Jesus Christ himself and God our Father, who loved us and through grace gave us eternal comfort and good hope, comfort your hearts and strengthen them in every good work and word.”