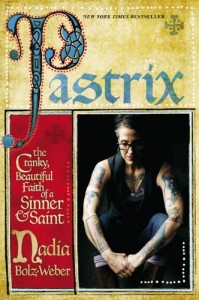 Even in the midst of Christmas services, supervisors and colleagues on vacation, and spending most of my days with O, I found time to finally ready Pastor Nadia Bolz-Weber’s Pastrix. Even O got into the act, taking it from me whenever he could. I really enjoyed it and I totally recommend it. I’m not going to review it, however. Instead, I want to bring something from her book and hurl it straight into my approval interview. In the first chapter, Nadia shares a story where she “realized that perhaps I was suppose to be their pastor.” It’s an awesome story about call, vocation, community, and identity. I also think it’s interesting when placed alongside one of the questions I was asked at my recent approval interview. The head of the candidacy committee asked me a very standard question: what kind of congregation do I see myself called to? The candidacy committee assumed I’m called to be a pastor to a specific community while Nadia’s description of call named that community. I already had an answer to the candidacy committee’s question but Nadia’s naming of her community is still lingering in my head. If my candidacy committee had asked me to name that community I feel called to be, I’m not sure I could have answered it on the fly.

The most straightforward answer is, of course, that I feel called to be a pastor to everyone. What I mean is that I feel called by God to be a pastor to people but not necessarily to be everyone’s personal, single, and only pastor. God knows my gifts and the needs that others have; I trust that the Holy Spirit will continue to match us as needed, helping me to grow in being a pastor in completely unexpected ways and helping those in need to find the spiritual and physical nourishment they need in whatever community they find themselves in. I’m called to be a pastor to everyone but not called to be everyone’s pastor, if that makes sense. And I think that’s a theologically solid point. The body of Christ is made up of a diverse multitude for a reason. Diversity isn’t something to fear in church; it’s necessary for the church to live out Christ’s love to a vast world.

So who, then, am I to pastor? If I had a magic wand, who would I draw up to exist in my church? I have a pretty creative and active imagination but I struggle mightily painting this image. I really wish I could point to a community, or a type of person and say, “oh yeah, that’s who I’m called to serve.” But I really can’t. I can point to situations, relationships, and times when I’ve been (and continue to be) someone’s pastor. I can point to kids, families, adults, singles, couples, young, old, and everything in between, as people who I have been pastor to and who see me as their pastor. I can point to relationship where I have been a temporary pastor, serving as a pastor to a person or family in a specific instance. I have been a pastor to people I will only ever see once and to people who I see every week and who call my supervisor “their pastor.” I can name people who have pulled me by my arms and told me, through the Holy Spirit, that I am called to be their pastor right then and now. And I have felt communities push me, headfirst, towards ordained ministry because they knew God was calling me to be there. I have felt the Holy Spirit moving in my sense of call and it is a powerful, wonderful, frightening, awesome, experience. But I can’t point to Nadia’s experience of call, at least as I understood it in her book. If my candidacy committee had ask me “whose pastor are you?” I don’t think I would have answered it as well as I want to. I can only point to who I have been a pastor to and how God keeps putting people and communities into my life in unexpected ways.

So when the candidacy committee asked me to describe the type of congregation, or ministry setting, I feel called to serve, I felt more comfortable describing an imagined community that already existed. But my answer left a lot of wiggle room. I focused focused on specific organizational cultural elements, identifying a small congregation with limited financial resources. I highlighted some cultural elements that might help (i.e. a desire to grow) but also knew that those cultural elements might not exist (or the exact opposite kind of cultural elements would stand in their place). I stuck with cultural organizational generalities because, to me, there’s an underlying and unnamed assumption that underpins my answer. I’m called to serve in a community that the Holy Spirit has, in some ways, already gathered (however loosely that can be defined). I’m not sure where that will be yet but I know it’s out there. I trust the Spirit to bring me there (and I pray it will be sooner rather than later – graduation is coming up!) The community will be filled with people I don’t know but who I will get to know and who I will love because that’s what I’m called to do. The community is there, I just can’t name it yet.