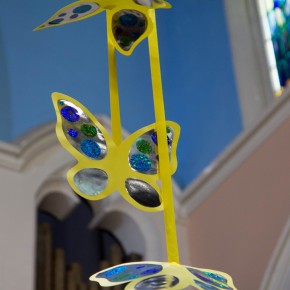 That’s right ‚Äì Christ is Risen ‚Äì even for the geeks. Because this week was a big week for geeks. We had our own resurrection of sorts because on Tuesday, the internet kinda exploded because the cast for the next Star Wars film was announced. Starwars.com posted a picture of the cast for Episode 7, all sitting in chairs and on couches. And they were in this large circle, all talking to each other through an initial read-thru of the script. And we went bananas because, right there on the couches, were the originals. Carrie Fisher aka Princess Leia, along with Harrison Ford as Han Solo, and Mark Hamill as Luke Skywalker ‚Äì were sitting right there! Even the robot R2D2 made an appearance, sitting in a crate off to the side. If you’re a fan of this sci-fi movie franchise that takes place a long time ago in a galaxy far, far, away, seeing the original cast members actually having a role in this new movies is just epic. This is the Star Wars movie we’ve been waiting for since 1983. And once the movie comes out in December 2015, we’re going to see a new story, a new future, for the characters we’ve known and loved for forty years. We’re on the cusp, the edge of a new beginning, and we just can’t wait to see what happens next.

And that new beginning ‚Äì this new next ‚Äì it’s bittersweat because it signifies something destructive. Because the thing is ‚Äì for the last forty years ‚Äì the story of Star Wars has ignited the imaginations of countless people. Like all good stories, the story of Star Wars caused many more stories to be created. Histories were written and explored in animated films, cartoons, comic books, and video games. The future was explained through new enemies, new foes to defeat, and new good guys and gals to root for. There was just this huge, new universe to live in and explore. So, we already knew what happened next because those stories were already written. We knew the next the things ‚Äì the new foes facing off against Luke Skywalker, the new political problems Princess Leia would overcome, and the zany adventures that Han Solo would get himself into. That story was not already known ‚Äì it was already part of the story we, as fans, embodied and lived. But this new movie changes all that. It was announced that all that history, all those years of stories ‚Äì all of that no longer counts and no longer matters. It’s as if a thousand voices have gone silent ‚Äì replaced by this new movie with a new history, a new future, a new story that we know nothing about. We don’t have that script sitting in our laps. We can’t flip through it and see what parts of the story come next. We’re on the edge of a new unknown beginning where the stories we told ourselves no longer work ‚Äì and I think that’s what these two disciples in our reading today from Luke understood. I think that’s what they were feeling and experiencing because when the stranger meets them on the road, stops them and asks them what they were talking about, what things they just experienced in Jerusalem ‚Äì the first thing that they do is stop. They stop walking, talking ‚Äì they just stand still. Because they, too, are on the edge of a new beginning ‚Äì a new beginning that they don’t understand, a new beginning that is unknown, a new beginning where they don’t have all the information ‚Äì because the stories they told themselves about Jesus, about the future, about their lives once Jesus redeemed Israel ‚Äì all those stories have been wiped out because Jesus died on the Cross. Jesus, for these two disciples, is just plain gone ‚Äì and they don’t know what to do next.

So, Cleopas and the unnamed disciple do what they know how to do. They take a journey out of Jerusalem and head to a town nearby. And along the way, they talk. The scripture doesn’t tell us what they said but I imagine they did what I do when I’m caught at the edge of a new beginning that completely upturns my expectations, thoughts, and visions of myself. I dwell. I relive the experiences. I analyze them, pulling apart all the pieces, thinking that if I think about the issues long enough, talk about them to the point where my friends are sick of hearing about it ‚Äì I just might figure out that one thing ‚Äì that one thing that makes what just happened sensible. Maybe you do the same thing too. We dwell in the what-if’s, what-might-have-beens, the warning signs, and hope that we’ll figure it all out, find that magic bullet that will fix it ‚Äì will fix us ‚Äì and we’ll just feel different. We won’t stand still. We’ll be able to move on, and get through the edge of this new beginning, past the anxiety, the worry, the mystery, the sadness, and the fear ‚Äì and we’ll get right to the good stuff ‚Äì to the things we expect and know ‚Äì to the events and experiences that leave anxiety and unknowing behind. We want to move forward ‚Äì to keep walking ‚Äì moving forward ‚Äì we don’t want to stop and deal with the loss of what we knew, of what we expected, of the loss of the stories that made us who were are.

Cleopas and the disciples wanted to keep moving ‚Äì to keep heading somewhere ‚Äì but when Jesus called them, when Jesus met them on the road, Jesus wanted them to stop; Jesus wanted them to hold still. These two disciples of Jesus who expected Jesus to change the world and redeem Israel, who expected Jesus to not die nor for Jesus to rise from the dead ‚Äì these two disciples, when they meet the Jesus-they-did-not-see on that road to the village of Emmaus ‚Äì they told Jesus what I don’t think they told themselves: that they just don’t know what’s going to happen next.

And that’s okay. It’s okay to not know what happens next. It’s okay to not see how moving to a new town will go or what that new job across the country will entail. It’s okay to be scared when a relationship that took our entire heart and soul, ends, or when a sudden illness flips life upside down. And it’s okay when an unexpected joy shows up and a long held dream is fulfilled. It’s okay to be unsettled, sad, and afraid at the start of all new beginnings because those new beginnings are never beginnings where we’re alone. Jesus is there – right there ‚Äì because that, to me, is part of the Easter message. Christ is Risen means that Christ is, above all, present right here and now. When the new beginnings come, and they will come because we never know the future, we never know which person will run into our path, which sudden change will meet us head on, or when some unexpected opportunity makes itself known ‚Äì when these new beginnings come, Jesus is right there, present with us because our lives are not static lives. Things happen. Change happens. And sometimes that change will feel as if our entire history, way of life ‚Äì whatever gave us meaning ‚Äì is just plain gone. But Jesus isn’t. Jesus is present. Jesus is with us. Jesus is walking together with us because Jesus is God’s love. Cleopas and the other disciple, heading down that road to a village away from Jerusalem ‚Äì Jesus met them. Jesus stopped them. Jesus had them stand still. And Jesus reminded them that his story, God’s story, our story, is all about new beginnings. The Resurrection ‚Äì that is the ultimate new beginning ‚Äì and that’s the new beginning that God gifts to us each and every day. We don’t know all our new beginnings ‚Äì we don’t know all the changes that will happen in our lives ‚Äì we don’t have our life’s script open on our lips, ready to see what our next story is ‚Äì but we do know this one thing – that Jesus is with us, on the roads of our lives, never shrinking from us because Christ is Risen. Christ is Risen indeed. Allelulia.