This is something that I never truly practiced for.

To be clear, I did take liturgy in seminary. I learned from some amazing pastors and priests the art of holding worship. I’ve watched preachers for years say these words. I’ve stood behind the altar or before it, spoken the words, did the hand motions, and acted like I was in the midst of a sacred moment. I’ve wrestled with these words, written essays on these words, and served as an assistant or participant in worship hundreds of times. But even with all of that, I don’t think I was truly prepared for that Sunday where I stood before a congregation, said the words, held the bread, and played a bit part in serving the body for the Body. 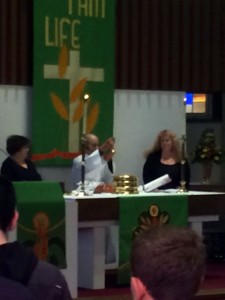 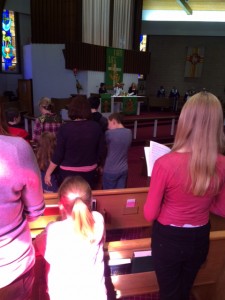 My memory of this moment is multi-layered. I stood there, not sure what to grab or what to point to. I spent my time in seminary focusing on the common cup. The congregation I serve uses those individual communion cups. The host was a solid piece of bread rather than just a big wafer or slice of pita. The tradition of the the prayer before the words of institution isn’t done at this church.

The words were spoken, the elements placed on the altar, and I was breaking it up, trying to figure out how to distribute the bread and also reminding myself to not forget to commune the assistants (like I did during my call Sunday). The moment was quick – but… it was sacredly quick. I knew the words I was saying. I knew their importance. I knew the logistics to put those words into action. And there was a certain weight to the words as I said them.

But this weight wasn’t what I expected. The words did not stick nor did they just sit there with some kind of sacred inertia that made them just hang like some sacred relic to be looked at from a distance. No, when the words came out, there was a movement away from the altar and straight to the people who were about to be nourished. There was an outward movement that I felt, experienced, and was excited by. The Lutheran understanding of the Eucharist focuses on the words “for you.” I didn’t expect my experience of saying the words to embody that focus. I thought that I might experience some sacred awe. Instead, I experienced some sacred serving. I’m truly thankful for that.