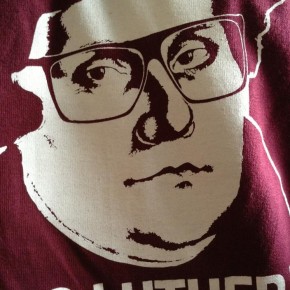 If you didn’t know, I am a t-shirt guy. While visiting my in-laws, I reflected on my experience with t-shirts. From my early days wearing Mickey Mouse T’s and being a walking billboard for Disney’s Captain EO, I spent high school stuck in T’s from Pacific Suncoast, Hot Topic, and early internet sarcasm and webcomics. Of course, you wouldn’t have seen these shirts. I was one of those punks who wore a black sweatshirt all the time. When it got cold, I just doubled those sweatshirts up. No one saw my T’s but I knew that they were there. The few times I didn’t wear my sweatshirts to school, friends were freaked out by the bit of color I wore. It just didn’t seem right to them.

In college, I started moving to band shirts but really just wore my high school clothes to death. Once I moved to the city, I was an early adopter of Threadless and bought a t-shirt at every rock and punk concert I went to. Now that I’m in seminary, Hipster Luther is my thing. My life story can be told in my collection of t-shirts. It’s possible I have one too many.

This is how Brooklyn does the beach. As someone who’s pre-recession wardrobe is, finally, starting to wear out, I’m going to be half naked, and hopefully, just as fashionable and good looking. 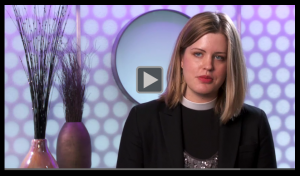 This week was the first episode of the tenth season of What Not To Wear. For the uninitiated, the show brings in the fashion clueless, trashes their wardrobe, teaches them some new tricks, and gives them $5000 for a whole new look. Even though they stopped having guys as the fashion victims after the second season, I still adore the show. I use to work in the building right next to where they filmed the show and, I have to tell you, that Clinton Kelly is tall (and awesome). I find Stacey London and Clinton Kelly to be the bee’s knees and you should too.

Anyways, a few seasons ago, an Episcopal priest was brought onto the show. The show was great not only because it brought to light the dangerous fact that the majority of clergy are poor dressers but also because, I thought, it helped acknowledge that there are young clergy women in the world and that they need our support. In honor of the season premier (which I didn’t particularly care for), Emily the Priest was brought back to update us on her life (scroll down and click on her image – she’s wearing the collar). I felt that she was nervous on screen (who can blame her?) but I was glad to see her back. However, I was not the only one to notice that she was wearing a sequined top with her collar! The comments take her to task (and I noticed that one of my professors from LTSP – who has fantastic style – reads the same blogs I do) though I think they’re harsher than they should be. I know what Emily is trying to do, adding some sparkle to the all-black-uniform. Personally, I think she should have focused on the jacket (a well fitted jacket in a dark patterned gray is fantastic – the few clergywomen I know who have these always look great). Throw on a few quick accessories, a killer shoe, and BAM, she’d be well on her way. But even without all that, I still applaud her for taking the risk that she did.

And the reason why I applaud her is because, well, I have a problem with the all-black-uniform. My problem isn’t with the collar but how clergy assume that if they wear all black, they get away with what they’re wearing. But that’s not true! If the cut is wrong, the jacket boring, the shirt poorly fitted, and the material ghastly, that clergy person is going to look terrible. TERRIBLE. And we, for some reason, seem to give clergy a pass when they do that. As a New Yorker, I am firmly aware of the power of black. But I’m also aware that relying on black to make your clothing decisions is ridiculous because nothing looks worse than a poorly fitted all-black outfit. The all-black look can be a very boring and a very easy look that can seem, on first glance, effortless. But, let me worn you, that it is not. Cut, material, pattern, accessories, fit – that is where style lives and where a person’s identity can echo forth. To not notice those details is, sadly, to let sloppiness rule and that is an identity trait that only a few can truly pull off. Style isn’t a fad nor is it only built around expensive articles of clothing. Style is a personal dash of identity that bleeds into your clothing. It says who you are, what you’re about, and encourages other people to be in community with you. Style says everything when it comes to first impressions. Style says that you know who you are and that you have contextualized who you are in the world. And I find that powerful because if style can say that, then when I meet a clergy person for the first time, my guards drop because I feel that since they know who they are, they are willing to know who I am too. That isn’t necessarily always true but it is a start to opening doors, building relationships, and forming community. Style matters! And I hope, maybe just maybe, that while seminaries redevelop their curriculum for the current world, that they seriously think about hiring Stacey and Clinton for one-off workshops for their senior classes. It would do some good.

I know I am a week late in posting this but I have been very busy. Consider this part one of a three part update. God willing, I will get them all posted today but if the bus I am riding in does not have wifi, then that probably will not happen.

Last Friday Night, after an afternoon at field experience(more about that in a later post), K and I dressed up and head out for Fashion’s Night Out. If you are unaware of what Fashion’s Night Out is, think about it terms of a giant citywide dress up party where everyone puts on their most trendy outfits, wear ridiculously sized heels, and strut around like the sidewalk is a catwalk. 1000 stores over the five boroughs opened their doors, stayed open late, brought in celebrities, and fed patrons with free snacks and booze. The party began at 6 but didn’t break out till around 8 or 9. K and I created a short game plan. We would hit Barney’s, Bergdorf Goodman, then head to Soho and walk up Broadway. We dressed up, I brought my camera, and we were ready to go. And by 8:30, we were exhausted and we called it a night. It was great.

Barney’s was rather tame but I enjoyed the Barney’s brand snacks and water that they gave out. We also saw 13 year old Tavi (the fashion blogger) there. Bergdorf was incredibly crowded – we had to wait in line to get in and every floor (where something was happening) was packed. The doggie designer outfit show was a hit. I loved the little 8oz sodas that were given out. And the place was packed full of designers. While K waited in line for a photobooth where she would play designer dress up, I got to see many designers I did not know and also ran into Nicole Ritchie. Louis Vuitton was a tad tame though, after I left, they had men in the windows licking their bags. Men in moonsuits walked up and down 5th avenue all night long. Tiffany’s had Audrey Hepburn lookalikes everywhere (and delicious lemonade). Down in Soho, Aldos (I think) and Topman were giving free booze (to everyone) and both seemed overwhelmed with the turnout. They ran out of clean glasses and people were reusing old glasses to receive the free booze (which I found very gross). All Saints was laid back but a good looking store (I never saw it before). And I wondered why so many stores actually tried to SELL things at Fashion’s Night Out. Fashion’s Night Out is not about shopping – it is about seeing and being seen. I pitied the guy who was in Barney’s at 6 pm and actually SHOPPING. Please sir, that is just not how it is done. In the first place, there is a great need for a general law and decree in the German nation against extravagant and costly dress, because of which so many nobles and rich men are impoverished. God has certainly given us, as he has to other countries, enough wool, hair, flax and everything else necessary for the seemly and honorable dress of every class. We do not need to waste fantastic sums for silk, velvet, golden ornaments, and foreign wares. I believe that even if the pope had not robbed us with his intolerable fleecing, we would still have more than enough of these domestic wants to be like everybody else, and pride and envy are thereby aroused and increased among us, as we deserve. All this misery and much more besides would be happily left behind if only our desire to be noticed would let us be thankful and satisfied with the good things God has already given us.

Martin Luther, To The Christian Nobility of the German Nation Concerning the Reform of the Christian Estate, 1520.
Translated by Charles M. Jacobs, Revised by James Atkinson, from Selected Writings of Martin Luther Volume 1: 1517-1520 edited by Theodore G. Tappert.

It isn’t just women who suffer from vanity sizing, men do as well.

We are all aware that different brands have different sizes. In some versions of shoes, I’m an 8.5. In others, I’m an 8. When it comes to shirts, depending on the brand, I’m either a small, extra small, or extra extra small. Depending on where I’m picking up a vest or suit jacket, I’m either a 36S or a 34R. I’m use to differences between brands and that is why I try everything I buy. But, lordy lord, when did PANTS start lying to me?

I only shop at a few places for pants because my size is rarely stocked at any store. I also know my current waist size because I sometimes keep track of it on my wiifit. But pants, which are measured in INCHES, should not lie to us. Esquire ran a report stating that only H&M is close to being right, with a 36″ waist really being 37″. Old Navy is the worse offender where a 36″ is really a 41″ waist. Like Esquire, I can’t stand this. You don’t mess with science or numbers my friends. If you can’t trust numbers, what can you trust??