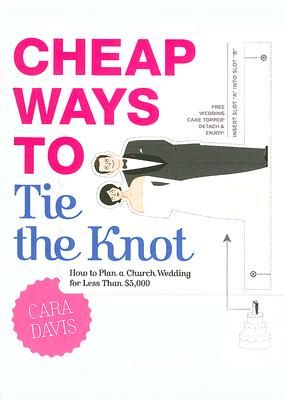 Cheap Ways to Tie the Knot: How to Plan a Church Wedding For Less than $5,000 by Cara Davis is a short, small book that is about 100 pages longer than it should be. In fact, page 19-20 of the book is really what the book is really about. On those pages, Cara Davis reports that she saved money by simply enlisting amateurs at her church would would either donate their services or were really really cheap. That’s pretty much it. Want good photographs? Settle for a guy with a nice camera. Want a great cake? Settle for a mother who’s a homemaker. Want a sophisticated altar set up? Bug a mother at your church who can’t wait to relive her big day. Basically, that’s the whole idea behind this book – enlist, and settle, for amateurs.

This book, while valiantly claiming to be a short missive against the wedding industry (which is something I don’t mind being about) is really less about weddings and more about being frugal. Being frugal is extremely popular on the internet right now – it’s hard to find a personal finance blog out there that doesn’t advocate a form of frugality that borders on obsession. Cara Davis falls into this trap, masking it in terms of “personality” and “being different” but, really, it’s about her being addicted to learning how to be frugal. She tells the story about how she bounced a few checks after she graduated college, created a budget, and then fills her book with tidbits on how to save money. Her wedding is the wedding of her current dreams – an illustration of her love of frugality.

Now being frugal does not mean being poor. Being frugal is, rather, a privilege (which Cara Davis doesn’t seem to realize and instead masks it under Christian piety) that those in the “have columns” are allowed to have a cultural and societal identity that allows them to separate from the supposed mass culture of consumerist and instead enter a culture where writing a blog post about making 32 breakfast burritos for 70 cents each (and including pictures!) and freezing them. The way to see this in Cheap Ways.. is to notice the last chapter about frugality (masked as moderation), her attack on other women’s choices if they buy a dress at a bridal salon, and the cutesy, but completely unnecessary, filler quotes located in boxes throughout the book. How does a quote from “When Harry Met Sally” help me plan a frugal wedding? It doesn’t.

Now, once I realize this, the book made a lot more sense. Grooms are, again, regulated to the sideline and are given a check list of things to do rather than being a part of the planning, or creative, process. DIY decorations, dresses, and plans are described but not shown which means I, as a reader, have to trust that Cara Davis’s taste (what she describes as fabulous) really is fabulous. I had a problem with this because, when describing how they hired a photographer for nothing, she devotes two pages of the book to formal poses and pictures that the photographer should take. Why do I question this? Because any photographer who takes his craft seriously (professionals or amateurs) would already have this list. If you have to tell them what traditional posed pictures to take, rather than have them tell you what’s traditional and let you choose, you’re not participating in the wedding of your dreams. You are, instead, participating in the art of frugality for frugality’s sake. And you’re leaving taste and sophistication behind.

Listen, the war against the wedding industry will not be won by running away or deciding to settle for things that are “your personality”. If your personality includes Martha Stewart Wedding, that’s great – that is something you should embrace. Defaulting from one extreme princessized wedding to a frugality mindset that throws taste out of the window isn’t the answer. What’s important is to not merely accept but to question, to wonder, and to implement what you want. I think Cara Davis misses this point even though she says it several times.

This book works if you are young, conservative Christian who likes the “rah rah” type of encouragement books. If you are into frugality, you’re going to find helpful things in this book too. The tips are not new (and the fact that it continues to promote the urban legend about birds and rice is troubling) but this book does what it wants. It doesn’t, however, do anything useful for grooms, ends up making theologically dubious decisions when it comes to what frugality and moderation really means, and it also pushes an ideology of having a quick wedding, right now, to the point of annoyance. Why was I annoyed? If you want a wedding in less than 7 months and pay 5k for it and don’t want to go into debt, you need to either have savings (which her target market of young college aged Christians won’t have) or a high paying position/low cost of living to make it possible. Her ideology of frugality does lead to a general opinion that draining your savings (and possibly, say, your emergency fund) is okay and encouraged. And why? Because she wants to get married as soon as possible while at the same time buying into the need to have a certain type of wedding right now. I have my suspicions what these reasons are (well, it’s just one but it’s obvious) and it tends to do a disservice to her main ideas. Based on her background, she has an idea of what a wedding means and leads to; she’s bought into that ideology, culture, and way of life. That’s great but she doesn’t realize it and that lack of self-awareness, in the end, is what reduces the overall usefulness of this book.

2 thoughts on “Book Review: Cheap Ways to Tie the Knot”