So this happened yesterday. 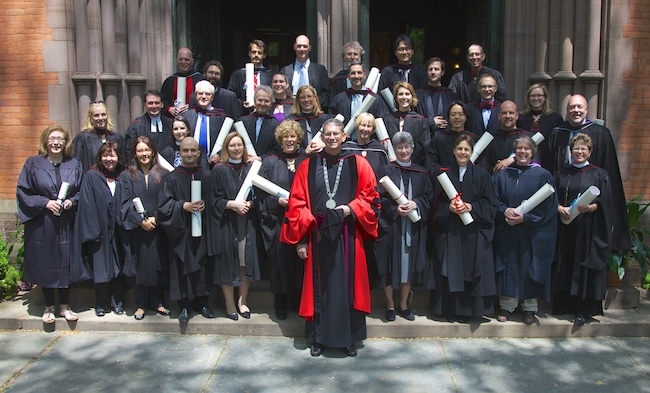 There I am in the front row. I guess that no longer means I’m a seminarianzilla.

Dura Europos, a backwater town inhabited by various empires from 300 BCE to 256 CE, is special because it was mostly preserved after it was sacked. Along the western wall, which was buried with sand to reinforce it during the battle, many relatively complete houses and buildings were found. Included in that was three religious houses, with one being a synagogue and the other a Christian church. The Christian church dates to ca. 240 and its baptistry is located in Yale University (due to how archaeology worked in the 1920s/30s). Pieces from the baptistry are located in Yale’s art gallery. You should go. They are just beautiful. Below are a few pictures from today. You can see more images here.

Turn out was a tad low today.

This quote, in some ways, describes why I am doing my thesis. I want to know what space & place meant in the first century hellenized world. There is meaning there – a meaning I’d like to be grafted onto. Then, I’ll be able to take my supposed placeless/spaceless world of “new media” and just see what it brings to a contemporary interpretation of Scripture.

“Writers do not magically create texts out of nothing, and readers must bring a stock of other texts and cultural codes to bear upon a writing in order to read it. In Barthes words, “The text is a tissue of quotations drawn from the innumerable creations of culture.”

From A Re-Reading of Romans: Justice, Jews, and Gentiles by Stanley K. Stowers (page 9).

The rumors are true: I have been approved for ordained ministry in the ELCA.

I entered the Metropolitan New York Synod’s offices a tad nervous. I felt a bit like I did that first day, nearly four years ago, when I met the candidacy committee for the first time. There’s a few less hairs on my head than there were back then, I’ve gained a few pounds, and upgraded my suit and shoes in the process, but the butterflies in my stomach felt the same. You never know, really, what to expect when you meet the committee. Any question can be asked and nothing is off the table. In the build up to the meeting, all my irrational dreams filtered through my mind, all resembling that dream of arriving to take a surprise final exam that I didn’t study for. Would I be Lutheran enough? Would I be Christian enough? Would they just see through me? Did my cat send them some dirt ahead of time? I spent the evening prior reading the ELCA clergy guide, “Visions and Expectations,” but that didn’t calm my nerves any. Instead, I reverted to my high school routine when my nerves were besting me: I listened to the loudest pop punk I could find. I walked into the offices, chatted with another candidate for approval, and then was whisked away to meet four members of the candidacy committee in one of the drab conference rooms that dot the Synod’s office. Introductions were pleasant, a water pitcher was in front of us, a theme for the interview was set, and then the fun began. And I’ll be honest – I had a lot of fun.

The first question was a standard strengths/weaknesses/what-are-you-doing-to-change-your-weaknesses twelve part question. I took it in stride, making sure to mention anything that I accomplished in seminary and internship that was quantifiable. I didn’t only mention leading a Sunday School program; I mentioned how many students attended weekly. I could feel myself using tricks from my old web developer days, freely using “I” statements while throwing out specifics that could be backed up with data if necessary. And as the questions continued, covering pastoral care, theology, my internship experience, and my vision for where I might serve in the future, I could feel myself rolling through each question, each one feeding the next, and just energizing me forward. I didn’t have to pretend; I just talked. And the words, they came freely because I was doing what I love to do: talking about God’s actions in my life. Faith is just plain awesome and throwing down words about my love for Christ, God, and Lutheranism, were easy. It would be easy to just claim that this was the Holy Spirit working through me but this wasn’t just a one-time event. I was giving testimony how I’ve been formed and how the Holy Spirit was there even when I didn’t feel or know it. The words just came and I just had fun. The interview ran long because we were having too much fun. The committee would say “we’re getting low on time and we need to wrap up” and then two more questions would follow. This happened all the time. I loved it and the time just flew by. 50 minutes was the time limit but I think we blew by 75 before I even realized it.

At the end of the interview, I thanked everyone, checked in with other candidacy committee members, and then headed home to pick up the family, change my clothes, and head to church to sing Christmas carols outside in a snowstorm. I checked in with the staff, took care of some work, and served as a liaison between our senior pastor (who was at the candidacy committee meeting) and everyone on the ground at church. So, after my approval interview, I went to work. And I enjoyed it.

Later that evening, the head of the candidacy committee called me with my results. I was approved. I thanked him for his leadership and time with me, hung up the phone, and got a high five from my son and wife. Then I went out for a celebratory dinner where I ate a 20 oz burger and followed that up with a Christmas party on the seminary campus. Happy and exhausted, I hit the hay way too late, got up the next morning, and headed back to work. I couldn’t imagine it any other way.

But there has been one thing I didn’t expect through this whole process: I didn’t expect to feel different now that I am approved. But I do. Maybe it is because I can now worry about finding a job rather than approval (and the finding a job thing is going to be a hot mess) that makes my life feel different. I feel like there’s one thing in the back of my mind that has melted away. And that melting has made life just a tad different. I went through my emails and found my first email to the assistant to the bishop in charge of formation, asking about candidacy. It was dated September 15, 2009. Now, 4 years later, here I am. Who knew this would happen? Well, God did, but not me. And here I am, with only one more semester left in seminary. Thanks be to God.

I spent the morning visiting NYU’s Institute for the Study of the Ancient World. Located on the Upper East Side, right next to the MET, the ISAW is an unassuming building on a block full of consulates, condos, and mansions. I came to see Measuring and Mapping Space: Geographic Knowledge in Greco-Roman Antiquity. This is the exhibit for my thesis so I went hoping to see a few pictures, pull a few names to read, and maybe touch an ancient artifact or two. Alas, everything was behind glass (and a security guard shadowed me the entire time I was there). The exhibit two rooms filled with medeival texts typically showcasing Greco-Roman thought or texts containing copies of the writings of Roman and Greek geographers. All the texts were borrowed from local institutions. It always amazes me how many ancient works the NYPL holds.

The tidbit I liked best was the small set of Roman coins on display. The curators explained how the emperors, while minting their money, would use the symbol of the globe to symbolize global domination. It wasn’t just a representation of how the world looked: the globe was a way of showing that the emperor owned everything, even the fantastic lands at the fringes of the world where Griffins and monsters lived. The globe stood as a symbol of imperial propaganda while I’ve always seen globes as antique play things.

When I was little, I would spin the globe really fast and then put my finger down. Where the globe stopped, that’s where I’d “live” when I grew up. The middle of the ocean, the arctic, wherever; I’d live anywhere my finger told me. But I guess that thinking is also a kind of domination – thinking that, no matter where I ended up, I would a) be allowed to live there and b) I would have the technology, skill set, character, and personality, to make it all work. I would have mastered my social domain even if my new friends would be giant squids and those worms that hang around ocean volcanoes.

The exhibit only lasts until January 5 and is free. If you can’t make it, visit online. 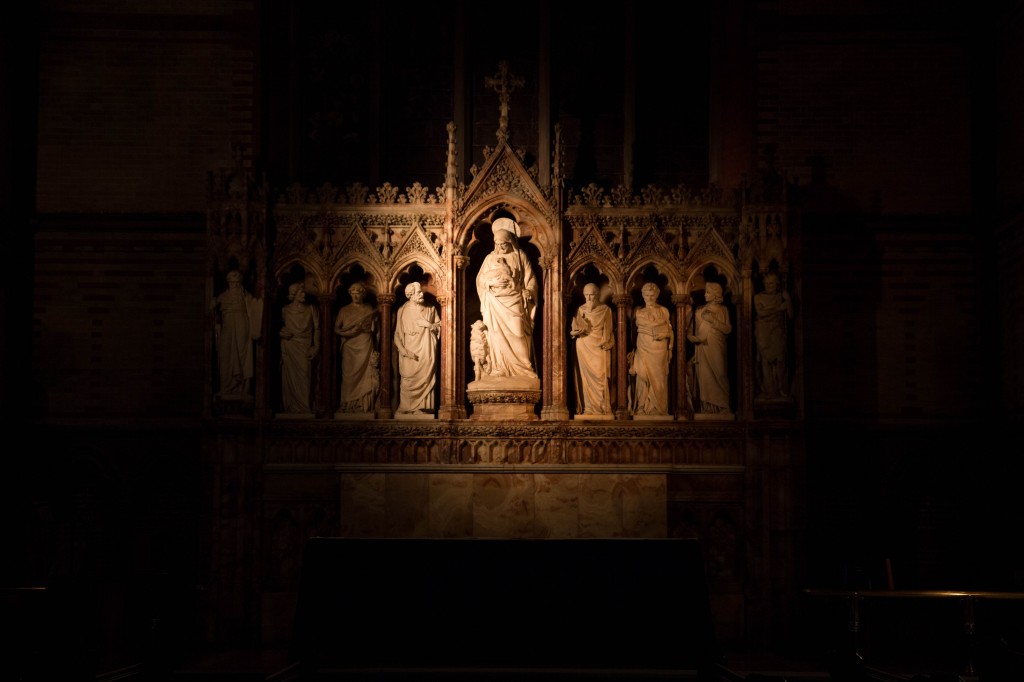 Jesus at Midnight. The Chapel of the Good Shepherd at The General Theological Seminary. December 2013.

I really need to get back to work but I’d like to share with you two tidbits of information.

1) The new ELCA call process forms did not go live on December 9. They are now scheduled to be unleashed in “early 2014”. Formatta filler lives on.

2) LTSP is looking for a program director to oversee a new Masters of Divinity program called “The Cooperative model.”

In this model, a student does full-time coursework and part-time work in a congregation over the course of three years. The student gains insight and longer-term experience in congregational leadership, receives intentional and intensive spiritual formation, and has tuition and fees covered by work in the congregation. Congregations gain the benefit of nurturing and supporting a future leader and consistent leadership over the course of three years. Congregations that can no longer afford a full-time pastor may benefit from this model.

General Seminary has talked about something similar but is calling it a ‘Wisdom Year.’ The final year of seminary is spent half-time in school, half-time at a church, with the hope that the church would pay the tuition and housing of the student (and possibly nothing else). One of the first questions most seminarians are asking is “what church is going to give a seminarian control of the budget?”

A few hours ago, I trifolded three pages carrying the entire sum of my thesis proposal for next semester. After securing the signatures of my supervisor (General’s professor of systematics) and my second reader (one of General’s professors of history) at lunch time, I popped in my 100 word thesis proposal, a really minimal outline, and an initial bibliography with 25 sources on it. Come April 15th, and after about 8,000 to 15,000 words, I’m going to have a thesis. I’m excited. But I’m probably most excited about the title: Tweet Tarshish.