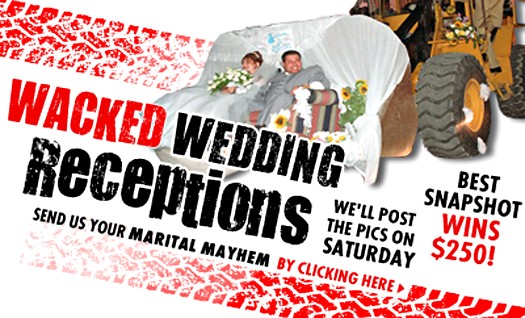 Or maybe they’re just running out of ways to make money on celebrity gossip since Britney no longer shaves her head every day. TMZ wants wacky wedding reception photos. They’re looking for marital mayhem. That sounds like a good name for a husband and wife wrestling tag team. If I get laid off, this might be a new career goal I need to follow. 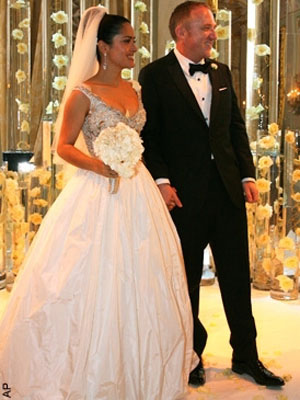 It cost at least $500,000 dollars. I don’t think the girls on the knot would appreciate Salma having two weddings (even a party afterwards still counts as a wedding to some people) but they probably would approve of her dress. And her body. And the fact that she’s worth a lot of money and is marrying a billionaire. But her 2nd wedding? Totally tacky even if it was in Venice.

Free Save the Date Vintage Postcards

Just because I’m not doing STD’s doesn’t mean I won’t link to them.

Engagement 101 is a magazine for the pre-engaged couples. Well, that’s what it claims. What it really is, is a magazine for women who like to hang out on “Waiting to be engaged” message boards and spent their days “hoping” that today is the day their boyfriends propose. And that’s kinda the whole problem with it. If the guy is suppose to propose, a magazine directed towards women about the pre-engagement process won’t fly (because isn’t pre-engagement already filled with magazines such as Cosmo, Glamour, etc?). However, if the magazine was able to propel these women who want to engaged to get off their butts and actually propose to their boyfriends instead, then maybe I could see it being a valuable resource. But can you really reprint the same article every month that just says “PROPOSE ALREADY. HE CAN’T READ YOUR MIND. IF YOU WANT IT, ASK.”?