I, sadly, don’t have any pictures for the event. I left my camera at home but my fiancee was a shutterbug. Once she’s able to post pictures of the day, I’ll post a link. My fiancee, through being an avid reader of blogs, one two free tickets to this event – an event where the price for one ticket starts at $60 dollars. $60 dollars to walk around, get free bottles of Fiji water, and stuff your face full of cake. I guess if you have a large wedding budget and were looking for high end vendors from the New York area (i.e. if you were actually just beginning to plan your wedding), this event might be pretty good. However, if you’ve been following my fiancee’s blog, you know we’re near the end of our wedding planning experience. In fact, there’s only 49 days till our big day. We’re in the home stretch. There’s not much left to do (though if anything falls through, there’s plenty to freak out about).

Anyways, the event started at around noon but my fiancee and I didn’t arrive till after 2. We walked through the side entrance, past the expensive cafes and hotel restaurants, and wandered to the second floor to check in. The check-in was empty except for many young women sitting around with Wedding Channel gift bags. I instantly keyed in on the fact that I did not have a gift bag and that I needed one. I had no idea what was in that bag – it could have been filled with empty tootsie roll wrappers for all I know – but I wanted in. I spent the whole time looking for a Wedding Channel gift bag and failed to find where they gave them out. The main vendor tables were on the fifth floor so we headed on up.

I’ll be honest with you, faithful blog readers, I came to this event with one thing in mine. I had never heard of the people hosting this event (The Wedding Library – which, after post-event googling, showed me that the dresses/planning/etc that they offer is very hit or miss; if you look the part, you get awesome service; if you don’t, they treat you poorly and act like you don’t exist), I wasn’t too excited about the fact that Martha Stewart Weddings had all their vendors there, and even the Vera Wang bridal runway show didn’t interest me. I came for one reason – to sample as many pieces of cake, chocolates, and desserts, that I possibly could. I wanted to leave the Wedding Party feeling sick because I ate so many delicious things. And I’ll be happy to report that is exactly what happened.

There was a lot of things I saw that I liked, some that I didn’t, though most things were in the pile “ideas that are fine but aren’t me”. I really liked the gals at Sugar Flower Shop – their cake samples were delicious. The flowers put together by Stone Kelly were just down right beautiful, majestic, and perfect for the bride with the right budget. I loved all the different dessert samples put out by One Girl Cookies. I’m a sucker for cookies, mini whoopie pies, and anything small so I loved the samples they had out. It was funny though – there were probably too many samples on display. Everyone, and I mean everyone, would go to the table, become overwhelmed by the choices, and worry that they’ll appear greedy if they take more than one to try. I’ll admit I ran into this problem so I, respectfully, only took two samples – the mini whoopie pies which had the right balance of chocolate texture and cream filling and a cupcake that was not a flavor I typically like but was well executed. And I love their business card. If I had a few more dollars in my budget, I’d book their cookie bar in a second to complement our other dessert vendors. Ah well – I’ll keep them in mind for any future events I’ll have.

One idea that I saw that I liked was using individual chocolates, wrapped in small boxes, as favors for a sit down reception. La Maison Du Chocolat were very big into that during the event and this is an idea I hope more brides take to heart. Make your favors EDIBLE. Your guests will appreciate it more than you think. And, finally, as I left the event, I indulged in some cookies from the Treats Truck. YUM! It was the icing on the cake. My eating of these delicious chocolate chip cookies and caramel sandwich cookies was what finally pushed me from “oooooh I ate too much” into the “omg, too much deliciousness is making my stomach explode”. Seriously. This was a great way to end the day.

The main event of the day was the Bridal fashion show that took place at the end of the event. The ballroom was setup as a runway show with a runway, white chairs, lots of music, lights, and cameras. While I took my seat, two tall ladies in black and brown dresses were playing electric fiddles. They played for about 15 minutes and then the Bridesmaid dress portion of the fashion show began. I starting here). It was obvious which brides were their at the show with their friends, which were their with their overbearing mothers, and which were there who only wanted free cake samples (okay, that was probably just me). The bridesmaid dresses were modeled by a set of young girls who were probably thirteen years old and were completely unfamiliar with how to model. The dresses they wore were okay, heavily Greco-Roman inspired (i.e. floaty bottoms and strapless on top), and your standard preach/rose/green bridesmaids colors. They were, for the most part, uninspiring. I did like one charcoal colored dress but that’s it. I pity the bridesmaids who are forced to wear those dresses.

After we all politely clapped for the bridesmaid dresses, the Vera Wang show started. Professional models, lovely dresses, and a great show. I actually liked quite a few of these dresses. Lots of A-line, mermaids, pickups, and lots of dresses that carried all their weight in the bottom. Most were strapless (I saw only one capped sleeve) which bummed me a bit but they looked fine on the models. Several of the dresses, to me at least, relied too much on their wearers to be thin. Very few people can pull off the baby doll style dresses where the volume is in the front, making anyone average sized look 9 months pregnant. And if a bride has any weight on her top, the balance of quite a few of these dresses would be off. And I think 75% of the dresses had at least one large bow on the belt. On the models, they looked great, but I don’t think they would look great on most brides. Take a look at the galleries on Vera Wang’s site, and I think you’ll see what I mean.

After the show, the raffle prizes were awarded. A 50% off Vera Wang bridal gown coupon, three honeymoons, three pamper parties, and other awards were given out. I won squat. But that’s okay. I got to leave the show with a swag bag filled with coupons I’ll never use and profiles of photographers that I’ll won’t look at. But it did have the Martha Stewart Winter 2010 Weddings issue and, well, that made me pretty excited. I’m a sucker for cakes and Martha Stewart knows it. We have a good thing going between us.

Oh. And before I forget, have I mentioned how much my fiancee loves a photobooth? She really does. She’s even thinking of booking one for our wedding even though it’s not in our budget. This means, of course, we are unable to walk past a photobooth and not use it. And so we did. We’re kinda silly. 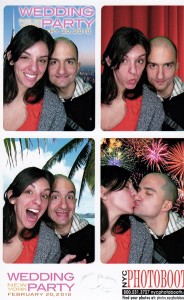