Right after the Christmas holiday, K and I took a little trip to Orlando. No, we didn’t visit the Harry Potter Experience nor did we visit the temple of Mickey Mouse. Rather, we visited that little “gem” of an amusement park controlled by the Trinity Broadcasting Network, The Holy Land Experience. Oh yes – an Orlando amusement park set in the era of Jesus. When K and I originally had the idea tovisit the park, I had misgivings because why should I give financial support to something that I knew was going to be ridiculous? But my friends at seminary encouraged me to go because they mostly couldn’t believe that such an amusement park existed.

It’s taken me sometime to actually sit down and write about my experience at the “Holy Land” because I’m still trying to wrap my head around the whole thing. It was as cheesy as I expected, historically inaccurate, and pushed every piece of TBN merchandising crap imaginable. And none of this really bothered me all that much because, well, what do you expect for a “ministry” that costs $35 bucks to enter? But there was one section of the park that did really annoy me – but I’ll get to that later. 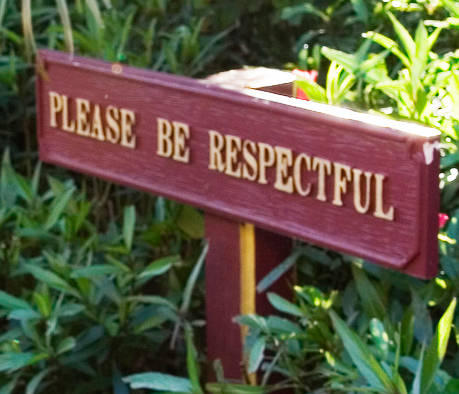 There were quite a few of these signs around the various prayer gardens filled with ridiculous romanesque statues that were probably bought on sale from a Home and Garden center. I wonder if these signs were put in place for critics like me.

After surviving the epic weirdness that is mid-day traffic in Orlando, we arrived at the Holy Land around noon. The place was packed and we were directed into the overflow parking lots. I noticed that many of the people walking into the park were not exactly who I expected – quite a few were visitors from other countries and there were lots of minorities! I was sure that the target market was “evangelicals” but the racial and ethnic composite of park visitors was more varied than most church services I have been too. K requested that her picture be taken in front of the sign. Not pictured is the main security booth at the entrance to the parking lot that was next to a giant, and poorly done, statue of a Roman legionnaire riding a chariot. We quickly walked into the ticket office, pasted the first of many prayer boxes that we found, paid our $35 dollars entrance fee, picked up our map and schedule of the days events, and walked into the park. Our first experience of Jesus was in cardboard cutout form. And yes, that is a crowd release saying that our pictures might be used by the TBN network.

We arrived just in time for 12:30 passion play. The main seating area was already filled so we hung out behind some ropes to the side. The build up to the start of the passion play involved some Roman soldiers milling about and a few “townspeople” walking around. There was also a push by folks telling us to also attend the 5:30 passion play where Jesus’ resurrection is made extra special by showing his battle with Satan using dry ice, fog machines, and fireworks. Once the play started, I couldn’t help but notice how the Roman soldiers and townspeople all shopped at the same sandal shop (and some were wearing socks!). The warmup act to the show involved signing a few really really terrible modern praise songs and a couple of group prayers. I could tell that the play was specifically targeted to the unbeliever demographic though I was curious how many unbelievers actually paid the admission fee to watch subpar church theatre. TBN must have some numbers and statistics that I am not privy too.

After the warmup, we were briefly introduced to Mary, Joseph, and the birth narrative. An angel with unbendable plastic wings told Mary to buck up because she’s gonna have a baby. We then jump 35 years to the beginning of the Passion in the garden. And then the devil showed up. The devil is a pacific islander it seems. Also, the devil loves serpents….and the same sandals everyone else was wearing.

Jesus prayed for quite a while, shed tears, and seemed very sad as the devil tormented him. Any “evil” thing said by a participant in the play was mouthed by Satan, implying that it was Satan who organized the entire Passion. An older woman next to me started huffing at this point and going “that’s not exactly how it happened!” (as if she had been there) but, by the end of the show, she was a believer in the TBN view of the experience. Judas eventually arrived, kissed Jesus, and Jesus is arrested while the disciples sat around like dopes. After his arrest, Pilate showed up and does everything in his power to wash not have responsibility for the execution which reminded me of early church history and the Acts of Pilate. I noticed that the park tried really hard to walk a fine line in terms of who should be blamed for the death of Jesus. The Jewish religious authorities were there but were downplayed. The political authorities were pushed to the background. The reasons for the execution were never clarified – rather, Jesus just had to be tortured, whipped, and beaten. Fake blood was everywhere. It was obvious that the actor playing Jesus had his skin permanently stained by the twice-daily “killings”. While Jesus is being tortured and crucified, quite a few of his followers and townspeople seemed to be around and sad for the torturing. In fact, there were shouts that Jesus shouldn’t be killed, that he should be let go, and his followers never seemed to desert him. Funny that. Jesus hangs dead on the cross

Jesus finally died. Prior to this, I noticed that there was a change in the audience. The picture taking had lessened, people were paying attention, and even one hispanic gentlemen had to be approached by security because he had become heavily emotionally invested in the story. Even though the sound effects of the whipping (there was a lot of that) was several seconds off from the acting did not seem to dissuade people from the story. People were eating this stuff up and there was a sense of reverence in the air. I just kept tweeting my reactions and shooting with my camera. It wasn’t the only time in the day when I realized that this park was speaking to a market that I just wasn’t apart of.

A Roman Soldier eventually “converts”, Jesus’ body was taken down and placed in the tomb, and the resurrection aspect of the story began. The women run to the tomb and find that it has been opened by fog machines! And it was at that point that the passion play took a very very strange turn. The MC and Roman centurion came out and began to talk about Jesus, about sins, and about how we should all believe that Jesus was the Son of God. Praise songs began to be played over the sound speakers and the townsfolks began to hum along. K turned to me and said “This is the Tinkerbell summoning!” and she was completely right. We were told that if we really believed in Jesus, that he would come back. And we were then led in the “Sinner’s prayer”, told to believe in Jesus, and then OMG! Jesus came back! He has a giant set of keys in one of his hands – giant plastic keys because I guess God can’t afford the real thing.

We did it! We brought back Jesus! High fives for everyone! And then we all sang one more praise song, a song that I did not know (but most people seemed familiar with it), and the play ended with another reminder to return at 5:30 to see the extra-special Resurrection. K and I instead decided that we were hungry and that we needed lunch. We ran to the otherside of the park and found a food stand with no line and indulged in a few first century Corn Dogs and Pepsi sodas. While we sat and went over our feelings about how ridiculous and silly the passion play was, we devised a game plan on what we wanted to see next. Holy Communion with Jesus anyone?

One thought on “The Holy Land Experience Part 1: Passion Smashion”