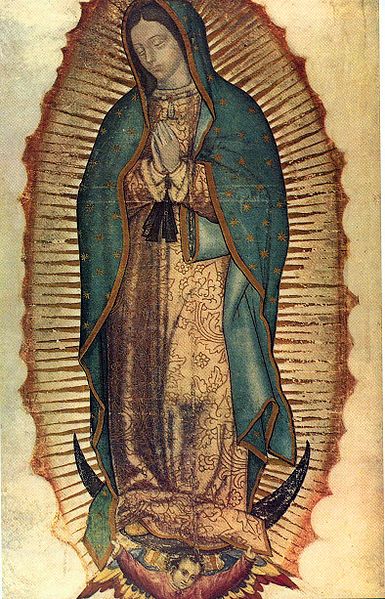 He [Juan Diego] said to him [the Bishop]: “My owner and my lord, I have accomplished what you asked for; I went to tell my Matron, my Owner, the Lady from Heaven, Holy Mary, the previous Mother of God Teotl, how you had asked me for a sign in order to believe me, so that you might build her temple where she is asking you to erect it. And besides, I told her that I had given you my word that I would bring you a sign and a proof of her will that you want to receive from my hands. When she received your though and your word, she accepted willingly what you asked for, a sign and a proof so that her desire and will may come about.
And today when it was still night, she sent me to come and see you again. But I asked her for the sign and the proof of her will that you asked me for and that she agreed to give to me. Immediately she complied.”
“She sent me to the top of the hill, where I had seen her before, so that there I might cut the flowers from Castile. After I had cut them, I took them to the bottom of the hill. And she, with her precious little hands, took them; she arranged them in the hollow of my mantle, so that I might bring them to you, and deliver them to you personally. Even though I knew well that the top of the hill was not a place where flowers grow, that only stones, thistles, thorns, cacti and mesquites abound there, I still was neither surprised nor doubted. As I was arriving at the top of the hill, my eyes became fixed: It was the Flowering Earth! It was covered with all kinds of flowers from Castile, full of dew and shinning brilliantly. Immediately I went to cut them. And she told me why I had to deliver them to you: so that you might see the sign you requested and so that you will believer in her will; and also so that the truth of my word and my message might be manifested. Here they are. Please receive them.”
He unfolded his white mantle, the mantle in whose hollow he had gathered the flowers he had cut, and at that instant the different flowers from Castile fell to the ground. In that very moment she painted herself: the previous image of the Ever-Virgin Holy Mary, Mother of the God Teotl, appeared suddenly, just as she is today and is kept in her precious home, in her hermitage of Tepeyac, which is called Guadalupe. – Virgil Elizondo’s translation

A happy and blessed feast day to those who celebrate her today!