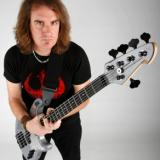 So one of the founding members of Megadeth is on his way to seminary. Sure, he’s going into the LCMS but we won’t hold that against him. He is a celebrity and he’s joining the Lutheran Christian ministry. I have no idea but I don’t think that’s the norm for celebrity-turned-clergy. As a friend on facebook said, “It gets boring when all the ex-celebrities come to TEC [The Episcopal Church] for their priestly call.”

An article in St. Louis Today fleshes out his story. After growing up in a Lutheran family and church, he moved out to LA, formed Megadeth, became a rock star, ended up in rehab, re-affirmed his faith, and ended up back at a church in Arizona. There, recognizing his skills, his pastor convinced him to develop a contemporary worship service. He’s being called to become the pastor for that role at his church.

And, in another sense, he’s become the current face of the distance learning model approach to seminary that Concordia (and a lot of seminaries) are now taking a serious look at. I know LTSP is struggling with setting up a similar program, GTS is in the beginning stages, and Luther Seminary is already well on its way. But what I found interesting about the Concordia model is that it seems to be an OLD model of ministry training. The men in the program are specifically already called to serve in a specific ministry at a church. They do two years of distance study, are ordained (to what, I’m not sure), and then do another two years to become a full blown pastor (I think). Their home congregation pastor serves as their supervisor. It reminds me of the old fashion training of clergy in the USofA where a pastor took on a few souls to teach and train. And I’m sure that this model is also developed from the “evangelical” influence that the LCMS has been under for years. It’s an interesting idea and I’m curious how it will play out. But then I also wonder if it will just end up with a large number of clergy who are stuck in a specific church and ministry (though maybe not – but the program title seems to imply that) and if it will end up perpetuating an idea that only ordained men should serve in specific leadership roles in the church.

Yet this might be the model the ELCA will follow if the “advice” for new clergy that they should be “bi-vocational” becomes a requirement. These folks already have places to work, are supposedly getting paid through their regular jobs, and are able to pay for their education. Maybe this is the LCMS’ way of creating a bi-vocational force of clergy for their next generation of ministers. Spooky.