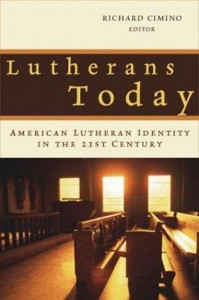 Last week, I finally discovered the “Lutheran” sections at General’s library. I am a little embarrassed it took me this long to find them – and it took my wandering around the library while looking for a book on Christian ethics to literally walk into them. One entire section, dominated by Martin Luther and his haters and lovers, another section devoted to old books still classified in the Dewey system (like an 1898 copy of a Lutheran cylopedia and a graduate thesis written in the 1930s, and paid by the WPA, to categorize the historical writings and artifacts located in Lutheran churches in New York). The third section, located near the back, marked BX8000 or so, is all about modern day Lutherans. And it was there that I stumbled onto the book Lutherans Today: American Lutheran identity in the 21st Century. Written in 2003, the book is a tad out of date (the Call to Common Mission is the focus of most of the arguments with the threat of the human sexuality statement looming in the background) but I’m really enjoying it.

In the chapter “Goliaths in Our Midst,” the story of megachurches in the ELCA, there was a description of how new members were received at Community Lutheran Church in Las Vegas that fascinated me – and something I’m probably going to steal for my future ministry. When new members are received, they do not just stand in front of the congregation by themselves. Rather, the members of the community who invited them to church are brought up there as well. It’s a nice twist on an idea that I previously heard about including new members into the community in a group so that those people would have each other to draw support from. Community Lutheran takes that idea a step further and expand their circle by including those who enjoy the church so much that they invite others to attend. I really like this idea and I think it might have a valuable place in a church’s community life – thought it might fly right into the face of stereotypical Lutheran shyness.