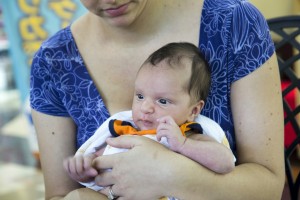 If you’re like me, you know what P.v.P is. If you don’t, you obviously are not a nerd like me. P.v.P is player vs player; it is the term used to describe when actual human beings, in an online game, fight each other. I’m terrible at P.v.P which means I did, a lot, and kill, not so much. Killing virtual people, spaceships, tanks, whatever, is just not my specialty.

Not enough fatherhood books are written by nerds it seems because no one told me that babies have their own version of P.v.P. All parents know this but I’ve seen it in acronym form before. Luckily, K is cleverer than me and figured it out. First off, babies aren’t going against other babies – they are going after mom/dad. Even though Oliver can’t focus on anything farther than 12 inches from his face, and he can’t track things with his eyes yet, he is prepped to fight. I find that Oliver prefers his P.v.P experience when I’m changing his diaper. Sure, he’ll act fussy or complacent when I put him on the changing table but that is just an act. It is all part of the game. He is camping the changing table, ready to strike when his enemy is near.

His first trick is to wait until the dirty diaper has been unlocked. You can try to shield yourself but it won’t work. He had 9 months of bootcamp training in the womb. He is prepared. He is prepped. He lets me have it. P.v.P at its finest. And by P.v.P, I mean, poop-vomit-pee. It is the baby hat trick. If your kid doesn’t hit you with all three, your baby is not trying hard enough.