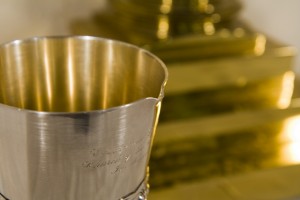 So, since Sunday, I’ve been avoiding this blog. I know, I know – based on my recent post history, this isn’t easy to tell. With the whole fatherhood/visits from grandparents/getting ready for internship stuff happening, taking a few moments to sit down and write isn’t in the cards right now. When I’m in front of the computer, I’m either working or I’m in a vegetable state waiting for my netflix queue to kick in and fill the air with lights and noise. The problem with having a son that sleeps through the night is that the days are filled with the need to entertain him, hold him, and just have fun with the little guy. So I get to experience the best part of fatherhood without that whole sleep deprivation thing. DARN /sarcasm.

Anyways, last Sunday, I stepped up to the plate and preached at my internship/field education site (before my internship actually starts) at Advent Lutheran Church. And…and what happened at the 9 am service is why I’ve been avoiding this blog. I’d like to share my sermon with you all but I really can’t. Although I wrote a complete manuscript, I did not follow it. I made the mistake of not taking into consideration how preaching at Advent in the summer works. Instead of standing in the pulpit, where 12 point font on paper is fine, the preacher stands on the floor, in the midst of the congregation. 12 point font just doesn’t work in that situation. So I was left with a manuscript that I couldn’t see, was never truly 100% comfortable with, and one I couldn’t really remember that well. A visit from my parents over the last few days had worn me out more than I expected and my brain just wasn’t firing on all cylinders. Now, none of that was a problem that I couldn’t overcome on their own. But when combined with my final “mistake” – where I forgot that my experience of scripture as it is being read out loud, in a sacred space, can be vastly different from my experience of scripture that is read out loud in my apartment. Standing in my bedroom, at the blank white walls, surrounded by diapers, changing tables, dogs, and cats, is not the same as hearing the words of 1 Kings and John 6 in a place filled with friends, spiritual mentors, and surrounded by beautiful Tiffany windows. So when my sermon on Solomon’s dedication of the temple was confronted by the words of Jesus in John 6, my mind kind of froze. I felt the need to engage with John 6 right then – and how difficult that can be. And when doing that on the fly, while trying to tie it to a Solomon’s dedication of the temple, at 9 am in the morning….that’s never a good plan for me. Some other folks with more experience, insight, or luck, might be able to do it. But, really, I shouldn’t have done that. As I stood up at the 9 am service, in front of the twenty to thirty people there, my mouth opened, words came out, and I rambled. Oh God, how I rambled.

Four days later, I’m starting to finally be able to laugh about it. Before this morning, in the quiet times, I’d relive that embarrassment – but not just that embarrassment. In a mean twist, I’d also relive all my past embarrassments – from girls in middle school, jocks in elementary school, and jokes got horribly wrong at Seminary – all of it would just reload and replay in my mind. Luckily, as I preached that sermon, I stayed relatively close to my general theme (it probably could be reduced to the tagline that God is real – which shouldn’t really be a theme but in the mainstream Protestant traditions, that sometimes has to be repeated more than once) but I lost my way. I stumbled through some examples. I confronted the reality of Jesus’s words and how difficult they still are. And I could feel myself losing the audience. I started to heat up. My polyester alb and polyester clergy shirt (which, lets admit, are pure evil) started to get heavy with sweat. And as the words just flew out of my mouth and my pregnant pauses became longer and weirder, for a moment, I had no idea where I was going to stop. But I was smart enough to realize when I got to that point in my sermon, when I had that sudden thought that I might go on till Tuesday speaking, that I needed out and I needed to end the sermon right there, right now. So I busted out an example that I framed as a reference to my new status as a dad even though my example wasn’t entirely truthful.

That’s right. I used a half-truth about Oliver to get myself out of a sermon jam.

I’m not proud of that.

To be honest, I never used his name, but I implied it. I stole the image from a professor at LTSP – where our experience of God is like being a fussy newborn at 3 am who would not go to sleep. The newborn, and those around it, are unaware of why he’s crying but what he feels, even though he’s throwing a fit, is a physical, real, and honest presence about him. He does not comprehend it – he might not even realize he’s being held and comforted – but that, in the end, is our experience of God and Christ. It’s an image I like and I think makes sense but it doesn’t really apply to Oliver. Sure, he’s fussed and he likes to scream and yell for hours sometimes. But he’s never done it at 3am. At 1 am, after staying up too late and having not gone to bed? Yep. At 5:30 am, after having woken up after being asleep for six hours, and refusing to go back to sleep? Yep. But in the middle of the night, at 3 am? Nope. He hasn’t done that one yet (knock on wood). But I used him as an escape route out of my own bumbling and rambling. And I’ve been embarrassed about it since.

After the 9am service, I led a bible study on Solomon’s dedication at the temple that went really well (fueled by two cups of coffee, of course). When I stood before the larger crowd at the 11 am service, I felt more prepared. I still didn’t follow my manuscript (though I tweeted to myself that I should) but I took what I heard at the bible study, fleshed out some of what I used at the 9 am service, and threw in several completely new examples and thoughts to plow through it. I didn’t think I rambled (though I think I ended the sermon in a strange place). I threw in some examples from a 1950s book cover and Disney’s Aladdin. I don’t think I knocked it out of the park but I did ok. I received some nice comments after the service (and through facebook a few days later) and I didn’t sweat as much during it. I had a good time while up there. Oliver seemed to enjoy it – I saw him in the back and he didn’t cry once. I think I did alright.

So as I go into this coming Sunday, with a sermon about Song of Songs, I’ve set a few goals for myself:
1) 14 point font for manuscript
2) Besides full manuscript, create a large print outline of it that I can go to if needed
3) Read all the scripture readings, outloud, several times before Sunday
4) Limit the stress you have before the 9 am service
5) Hydrate on Saturday

And I guess, goal number six, would be to actually write the darn thing. I should get on that.