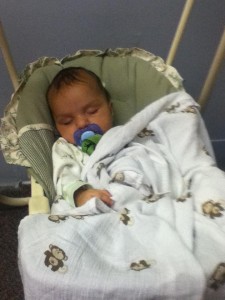 Yesterday was another milestone in the life of Oliver. He went to daycare for the first time.

My seminary offers subsidized daycare for students (thankfully!) so I packed up his gear while my wife packed up Oliver and we headed down to Chelsea. We arrived, popped into the daycare center, and were confronted by seven unhappy babies. With the new faces in the room, some babies decided to go wild and cry, cry, cry. Others were cranky because they needed a nap. Some were having their breakfast and demanded more. And Oliver – well, Oliver was picked up by one of the workers, placed on her lap, and proceeded to be as cool as a cucumber and he smiled at everyone in the place. Other kids came to say hi to him (and to try to steal his pacifier) while others were jealous of the attention he received. Soon, he was sharing the lap with a six month old girl who, to be honest, is the same size as him. Oliver was just happy as a clam and started flirting with all the ladies around him. What can I say? He’s a player, he’s a baller, he’s a game changer – a chip off the old block if I do say so myself.

It took about 20 minutes to unpack his belongings and leave the daycare. It was tough to leave him but I was happy to see that he was the chill baby. In fact, I spent most of my time taking care of other babies while talking to the daycare staff about Oliver’s needs rather than pay attention to my big guy. I hope he doesn’t pick up any bad habits while there (though he’s gonna get sick – the miles of snot I saw would scare a pathogen movie maker). As we left, he was kicking around in a swing. When K arrived later that evening, he was the last baby there, in the same swing, and taking a nap. It sounds like he had a great day. He napped, ate a ton, and had a great time. He’s got a good life.