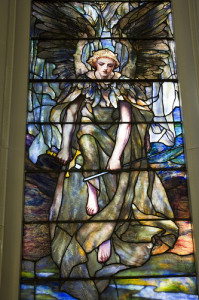 So, today, I was told that I didn’t speak like I’m from around here.

Today was our monthly conference meeting. The pastors and interns throughout Manhattan woke up early, grabbed a cup of coffee, and traveled to my church. I arrived before them, helped setup, and learned what parts of the opening worship service I was going to lead. Two days prior, I suggested to my supervisor that we should run through Morning Prayer as listed in the ELW. She listened to me even though she wasn’t familiar with it. It went off without a hitch and I got to re-read the readings for the Magi for the millionth time this week. Which isn’t a problem, really, because I actually dig it the more I read it.

After worship, the pastors and interns gathered there things, headed into the basement, and raided the Starbucks coffee/pastries like they were breaking a forty day fast. Our topics for our discussion today was immigration. One of our presenters, prior to worship, needed a projector and screen. Once again, I was drafted to set that bad boy up (which I did). And it was during the setup where the presenter inquired about where I came from. They thought I didn’t sound like I was “born here.” I thought I just sounded stuffed up from the cold – or maybe hyper energetic because of the grande coffee I downed five minutes before. Either way, I shared my story about being ethnically vague to some folks. He thought I was East Indian. I told him I was born in L.A. That seemed to clear it up.

This incident just reminded me of what I wrote before – about what pastors are given. In many ways, once I receive my first call, I’m going to be whatever people decide I am. They’re going to see my face on the website and Facebook page, see my three names (and, yes, I’m going to be one of THOSE pastors who uses three names) on the board in front of the church, and I’m going to end up just being a lot of things. Father, Priest, Pastor, are the easy ones. Immigrant/Middle Class/Hispanic/Brown/Good-enough/like me/can-understand-me are going to be other ones that I’m not sure I’ll be able to pull off. But, either way, I’m going to be a slate that will be projected on. That doesn’t surprise me – and I always hoped to be seen as immigrant friendly – but I’m always impressed when someone things I’m something that I’m not. East Indian is a new one for me. Sephardic Jew is probably my favorite. And I probably should work on my articulation when I’m tired and coming in from the cold, just to make sure I don’t create a new accent all on my own.

3 thoughts on “The power of projection”