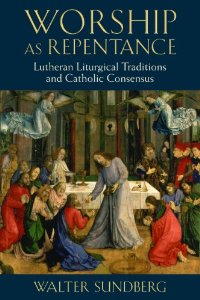 That’s a great title, isn’t it?

I finished the book a week ago, returned it to General’s library, and I’m not sure how much sticking power this book has. The introduction, and conclusion, are mostly screens against the author, Walter Sundberg’s, view of eucharistic piety as practiced in the ELCA. He blames the 20th century liturgical movement as turning the worship service into a ritual centered on mysticism. The Lord’s table is where one is invited to “participate” in the divine. There is no need for self-reflection, self-examination, repentance, or any individual’s need to seek forgiveness. Rather, the Lord’s Table is treated as a dispensary of little bits of Godliness – like some kind of giant holy pez dispenser. Show up, hit the right button, and POOF, you get your little bit of God. There’s no need for personal change.

I get what Sundberg is trying to do. He’s trying to reconcile a couple of traditions in the Lutheran church with the problem of what a Christian looks like, how they behave, etc. Throughout The Book of Concord, there are many passages describing the Lord’s supper and what happens when the “unworthy” receive it. It’s not just a means of grace – for those who are unworthy to receive the bread and the wine, the Lord’s supper is actually dangerous. The Lord’s Supper might be the focus of a worship service, but the worship service has a wider purpose. It isn’t merely to meet people where they are at and keep them there. Rather, through worship, Word, and Sacrament, individuals are actually changed by the Spirit to go out and serve their neighbors. So, the question remains, how that change is manifest. And if the life of a Christian is to be one of continual worship (in a sense), how does that change manifest in a life beyond Sunday mornings. That’s where confession, forgiveness, and the “office of the keys” come in.

I actually think Sundberg does a great job tracing the use of Confession & Forgiveness since the Reformation. He traces its history through American Lutheranism as well – but his love of the 1917 Service Book and Hymnal leaves me wanting. I know what he’s trying to do. He’s trying to combat the churches who don’t include Confession & Forgiveness in their services every week. He’s trying to raise up that the Word, and the need for daily repentance, is worth something. He’s trying to point out that inclusion of others doesn’t mean we believe that everyone who comes to the Table is left in the same place as when they came. I get it, and I buy some of it. But Sundberg comes off as an angry old man while doing it because he relies on outdated data to make his point. He’s advocating the point of view that sociologist Rodney Stark has made that religious groups grow when they require, and give, individuals something tangible for their membership. But Sundberg, while relying on current data for the decline in ELCA churches, uses old data pointing to the continued rise in membership in Evangelical/Pentecostal churches (pre-2000 shows growth; post-2000 shows decline). Sundberg is advocating some form of “rigorousness” to ELCA membership and worship life. He’s trying, in his way, to say that worship matters and that this is serious business. But he does it in a way that comes off as…stuffy, old fashioned, and cranky. And, even though I don’t wholly disagree with his premise and ideas – his approach towards worship, I believe, wouldn’t allow me into it. I can’t really say why I think that, but I do. I, who grew up non-Lutheran, border atheist, and Latino – well – I wouldn’t be welcomed in his worship space. And I can’t advocate an approach to worship that wouldn’t let me into it.

Yesterday, I finished conducting my first type teaching a First Communion course. The ages of students ranged from 6 to 13. We used an old First Communion course but out by the ELCA in 1989. The pictures of students were…well… denim jackets were very popular back then. I’m amazed we, as a people, survived most of the eighties. But I was impressed with the engagement of the kids. Unlike me, they think much more concretely. They aren’t lost in an abstract point of view and they don’t see symbols, metaphors, or patterns like I do. They are, well, themselves. And all of them seemed to inherently put a form of rigorousness towards their approach to the Lord’s Table. They just got that it was the body and blood of Christ. They weren’t afraid of our conversations about death, forgiveness, and new life. And they saw, in the eucharist, not a ritual or any kind of mysticism. They know they need to believe it what is being offered there. There is a strictness inherent in their understanding of the Lord’s Supper. And I get that. It’s not merely a ritual participation in the divine and it’s no magic pez dispenser. There’s a wider perspective that’s required – a perspective that is self-reflective, includes self-examination, and sees, through the entire church service, including the Lord’s Supper, a give-and-take; a movement. It’s fluid. There is a fluidness towards worship, and faith, that shouldn’t be lost. In fact, it should be highlighted as a big part of the Lutheran tradition. I don’t think Sundberg, in his book, is pointing out what I’m noticing – but maybe his book is helping to frame my look at it. So, I’ll give him a thanks for that.