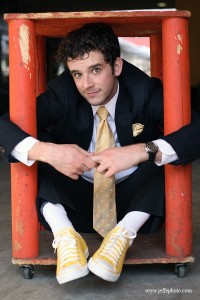 I just came home from an evening out with the misses where we saw the wonderful Buyer & Celler staring Michael Urie. I can’t say enough good things about this show. Michael is fantastic in this one-man show that’s a fictional take on the mall that exists in Barbra Streisand’s basement. The show asks what it would be like to be the employee that worked there – a wonderful premise that’s hilarious. I loved seeing it and I can’t recommend it enough.

There’s a part in the story where Michael (who plays a character named Alex) talks about the concept of utopias and how, maybe, that’s part of what actors, directors, producers, and people-in-general try to do: they try to create these perfect little worlds, letting the right people in, and setting the place just right, so that the world we live in is a world of our own creation. It’s an interesting scene and an interesting view on how people interact and build their own worlds. And as the words were coming out of Michael’s mouth, I couldn’t help but think about ministry (I know, I know) and how that…that just doesn’t work. The problem with ministry, from my limited experience at least, is that the most effective and functional ministry work is done when the people we don’t expect show up into the room. And I’m not just talking about the drunks, or homeless, or poor, or whatnot – the groups of people that my previous comment typically brings to mind. No, the most effective ministry happens when the difference walks through the door. That means a church full of the unchurched is going to have a heck of a problem when someone’s middle age dad or young family walks into the door. The church that ministers to the poor and homeless is going to struggle to integrate the upper middle class empty nesters that want to join. And the church that is upper middle class is going to struggle when the projects behind the church building starts to enter the church. That’s the problem with the Holy Spirit – it keeps shoving difference into our midst. And that’s really hard to deal with, plan for, or facilitate. It’s kinda like parenting, to some degree. Once you get a routine, everything changes. Ministry keeps feeling like that to me – and is probably why I’m having so much fun, and being so exhausted, while being a part of it.