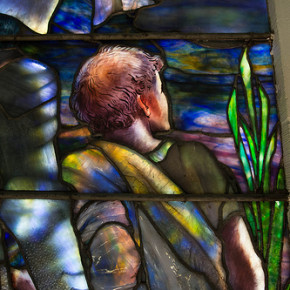 Preaching on Pentecost + 7, semi-continuous readings, specifically the story of Naaman and Elisha.

[Note: The text doesn’t match the audio 100%; seems I lost my manuscript where my handwritten corrections were made.]

Six weeks ago, I stood here and introduced our current summer program ‚Äì the reading, and preaching, on the stories of Elijah and Elisha. I opened with Elijah taking on the prophet’s of Ba’al on a mountaintop in Northern Israel. And I also said, quite clearly, that we were going to be looking at Elijah and Elisha for five weeks. Five weeks. We’re now at six weeks. We’re doing something a little unplanned because the stories of Elijah and Elisha ‚Äì well, they’re awesome. We can’t stop talking about them. Our original narrow path of five weeks just didn’t seem long enough. We had to break the boundaries that we setup.

I guess we were just a tad too inspired by these rule breaking prophets to just stick to our rules too.

Last week, Pastor Brown introduced Elisha ‚Äì Elijah’s successor. In that story, Elijah and Elisha are on a journey together ‚Äì and as they walk, they are separated ‚Äì split apart ‚Äì by chariots and horses of fire. Elijah is taken up into the heavens in a whirlwind while Elisha is left here, on earth, to pick up Elijah’s mantle and be Elijah’s heir. And with that inheritance comes responsibilities ‚Äì responsibilities that call for rule breaking.

Our reading today begins with Naaman, the commander of the king of Aram’s army. Aram is a word we don’t use much today but it describes the territory around Damascus in modern day Syria. Aram and Israel were not friends. In fact, throughout the book of kings, we read stories of Aram, Israel, and Judah fighting wars against each other. They’re use to being at war with each other more than being at peace. So we have this commander of Aram’s army ‚Äì this leader of the enemy forces ‚Äì a leader who is a mighty soldier, who’s won victories ‚Äì who’s everything he’s suppose to be as the general of the Aram army – except for one thing; he’s sick. He has leprosy. We have no idea how long he’s had it. He might have fought many battles while suffering through it, maybe even defeated Israel a few times. But we know that this disease is going to catch up to him. And he knows it too. He knows that his great strength will fail him. He knows that the community will start to shun him and push him away as his disease worsens. He’s going to lose battles, lose the respect of his king, lose the army, his wealth, his family, and, eventually, his life. He’s wasting away and he’s on a journey ‚Äì as one commentator put it ‚Äì a journey from health, status, power, and control to one of sickness, weakness, isolation and death. He’s a warrior caught in a battle he knows he’s going to lose ‚Äì and he’s starting to get desperate. And we know he’s desperate because he begins to break some rules and he listens to a nameless young girl.

Now this nameless young girl had no position. She had no wealth, no social status. She didn’t even have control over her own life. She was captured in a military raid on Israel and now serves Naaman’s wife. She is, in the eyes of the world, nothing. But she says something that gets Naaman’s attention. She talks about a prophet who can heal him so he does what any desperate person would do ‚Äì he takes a chance and goes to see this prophet in Israel.

Naaman, in away, has broken the rules. He’s listened to the powerless. He’s listened to someone he shouldn’t have. But… he doesn’t just immediately head to Israel. He doesn’t rally the army for another raid though he probably could have. He might have even been able to capture Elisha and force the prophet to heal him. No, Naaman instead goes back to following the rules. He talks to his king, gets permission to go to Israel, gets a letter of introduction and gathers together all the gold, silver, and fancy clothes he can carry to bribe Elisha to heal him. Naaman listens to the powerless and immediately goes back to following what the powerful do. And it works! Naaman finds himself at the door to Elisha’s house. He brings with him his gold, silver, and gifts, his chariots and an entourage. Naaman arrives, in force, at the door of this prophet. He arrives as a general, as one in charge, as one who isn’t on the journey that he’s truly on. He’s losing his life but he’s acting like he’s not. He’s coming to the door of the prophet as one who expects to be healed, not as one who needs to be healed. So it must have blown Naaman’s mind to come to the front door of Elisha’s house and be met by a messenger rather than the prophet himself.

Elisha doesn’t come to the door because, I think, he’s not playing the game that Naaman is. Elisha has seen power. He’s conversed with kings. But he’s also seen a different power ‚Äì a power with a different agenda that doesn’t seem to follow the same rules. A power that seems willing to break the rules that get in its way. Elisha has seen Elijah being taken up in a whirlwind. He’s picked up the mantle. He’s parted the waters of the Jordan and performed his own series of miracles ‚Äì miracle stories we don’t read in worship but that are there in the chapters before our reading today. He’s stopped children from being sold to cancel a debt, he’s caused an older woman to give birth to a son, and he’s even provided food in the midst of a famine. He’s witnessed God’s power breaking into the world to restore relationships that should, by the world’s definition, end. He’s witnessed God’s power stretching beyond the borders of Israel. And he’s seen the commander of the enemy army march to his front door, wield his gold and silver and chariots, and seen this commander ignore just how powerless he is. Naaman, like the captive young girl, is powerless in the face of his disease. He is marching towards brokenness but acting like he isn’t. So Elisha gives him a simple task ‚Äì to go to a local river and wash seven times. To go into the river of the enemy, to remove his armor, his shield, to step off his chariot, and wash seven times, in the wide open, powerless. Vulnerable. Unsafe. He’s told to be naked and weak in the face of his enemy. Only then, when his rules are blown open and he’s no longer in control, will healing take place.

Now, in reality, Naaman never stops being powerful. He never stops being the general of Aram’s army. Even in the middle of the river, his chariots are still under his orders and his wealth that he brought into Israel still belongs to him. He’s in a much different place than the captive young girl who started his journey into Israel. He has a level of control over his life that she never will have. He will always be named while she’ll always be the nameless. Naaman comes to God in the only way he knows how ‚Äì he walks up to Elisha’s front door using the only rules he knows ‚Äì the rule of power, force, wealth, and might. And that’s where God meets him ‚Äì right where Naaman is. That’s where God’s messenger met him. God doesn’t wait to begin the conversation with Naaman until he repents or renounces the gods of Aram. God begins the conversation in the heart of Naaman’s strength and control ‚Äì by having that captive young girl, deep in the heart of Naaman’s family, begin the conversation. God doesn’t wait for Naaman to follow God’s rules before God reaches out to him. God acts first ‚Äì setting in motion the breaking down of Naaman’s expectations ‚Äì and only then does healing take place ‚Äì because God isn’t afraid of meeting Naaman in Naaman’s strength; talking with Naaman where Naaman believes himself to be most powerful. God isn’t afraid of meeting Naaman’s chariots and wealth and military might. And God isn’t afraid of meeting our strengths either.

Naaman is an outsider. He follows other gods, he’s not an Israelite, and he’s even defeated Israel in battle a few times. He’s not suppose to get healed. But he is healed because God isn’t afraid of being bigger than our expectations. That’s part of our invitation in Naaman’s story. Imagine bringing to God all of who we are, beyond just our weakness ‚Äì of laying at the foot of the cross what gives us strength as well as what shows our brokenness. A good job with nice benefits and security; a great family where everyone communicates with everyone else; even our own faith life ‚Äì from our prayers to our attending worship, even during a long 4 day weekend in honor of the 4th of July. Because God’s call to us isn’t for just a part of us. God didn’t ask Naaman to wear a sackcloth and to enter the court of the king of Israel with dirt on his face. No, God met Naaman where Naaman saw himself. And, it was there, that Naaman was changed.

The story doesn’t end with Naaman being clean. Our reading skips the last few verses where Naaman returns to Elisha for a final conversation. Naaman’s mind and heart have been open. He converts. Hebecomes a follower of God. And he asks Elisha to pray for him because Naaman’s job puts him in a bind. As commander of the army, he is required to escort the king to worship other gods. Naaman will bow towards other gods when his king bows ‚Äì and Naaman asks for pardon. He asks for forgiveness. He asks for help because what caused him his strength ‚Äì his military might, status, and power ‚Äì is now going to cause him to stumble. His chariots, silver, and gold, cannot help him in that situation. Naaman’s sense of strength is really powerless in the situation with his king. He’s not in control because the king of Aram is. Naaman asks for forgiveness from God. And, like in the bathing in the river, when Naaman was exposed, God meets him as well. God has taken and accepted all of Naaman for who Naaman is ‚Äì even Naaman’s weakness within Naaman’s powerfulness. Elisha does what we are all invited to do when we come to that place ‚Äì when we ask for God’s pardon ‚Äì ask for God’s help ‚Äì ask for God’s clarity in light of a difficult situtation; Elisha turns to Naaman and reaffirms God’s promises to him ‚Äì that God loves him, will not give up on him, and has accepted who he is but won’t leave him there. Naaman isn’t alone. He’s healing has brought him into the community of God. So Elisha affirms that promise and says to the commander of the enemy’s army ‚Äì Go in Peace.
Amen.