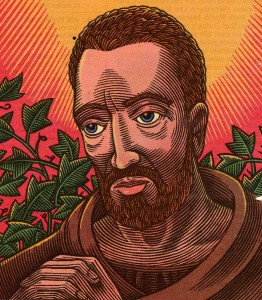 After a very successful visit to the doctor’s office (O is healthy, on-track, and off the chart in all the things), O and I settled in for some quality time together on the couch. As he sat there looking at “Hop and Pop,” I opened up Augustine and the Catechumenate. Today’s reading, looking at Augustine’s On Catechizing Inquirers, was riveting and O wanted to hear some of it. As I read out loud, he followed along in “Hop on Pop.” I got about a paragraph into the book before O reached out and took the book from me. He looked at me, pointed to a sentence in the book, said a few words, and handed the book back to me. Here’s the line that interested him so much:

But all these works, while emblematic of Christian evangelization, do not address what Augustine addresses: how to present the “good news” to one who now wishes to become a Christian.

I’m not sure why O picked that sentence but it’s a good one. That’s a question that isn’t really addressed in my seminary education so far. Rather, it’s a question I’ve been working out through my field education/internship/senior seminarian work. Augustine’s work worked because, unlike previous texts, it taught the teacher to inquire about the newbie’s context and to create a conversation that spoke to them exactly where they are. His context, of course, was North Africa near the end of the Western Roman Empire. He’s not in NYC in the 21st century. But Augustine’s question is a great one – and one that I still struggle with today.