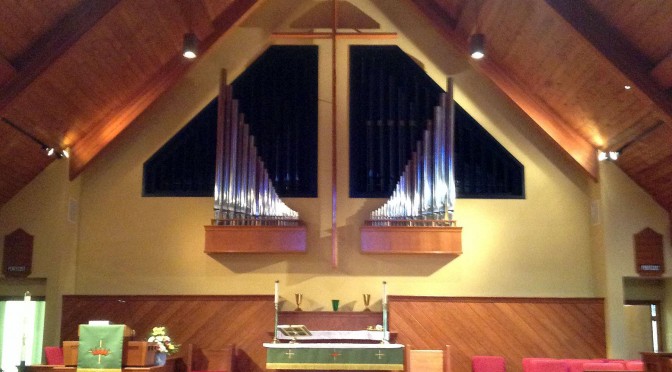 So did Peter pause before he answered Jesus’ question?

There’s nothing in the text that says he does. There’s no language to heighten the drama or a little interlude describing Peter’s actions before he speaks. The story goes straight from Jesus’s question – “who do you say that I am?” – to Peter’s response: “You are the Messiah.” If you look at the text in our bulletins, the only things separating Jesus’s question from Peter’s response are a few spaces and the words “Simon Peter answered,” A name, an action, and a comma – that’s our pause. That’s all the text gives us before we hear the answer. And I want to hold what we’re given for just a bit. Because Jesus’ question isn’t just Peter’s question or a question for those early disciples. Jesus’ question is our question too. Our name is in the response too. So what exactly do we say – what do we do – when Jesus comes to us and says – now just who do you say that I am?

Now, I’m relatively new to this community here at Grace. My family and I just recently started attending services here while we await my own call process at a church nearby. We discovered Grace by googling for preschools and I’m proud to say that our son will be attending school at Grace in two weeks. We’re excited. And we’ve really enjoyed attending worship here. The welcome we’ve received from y’all has been fantastic. We feel blessed by the Holy Spirit to have been brought here. But one thing you might not know about me is that, in my preaching, I have been told that I have a tendency to bring a bit of my love of popular culture into the sermon. And I’m going to continue that streak today and all because Taylor Swift, the pop star, released a new song on Monday that, I think, plays into Jesus’s words today.

In her new song “Shake It Off,” Taylor starts by saying what people say about her. From gossip about her personal life, her relationships, her intelligence, her skills as an artist and pop star – she throws it all out there and she announces she’s not going to let it get to her; she’s going to “shake it off.” She’s not going to let what others say about her deter her from her own life. It’s really a brilliant pop song – and it’ll be a hit because it does what all good pop songs do and touches on a part of our collective lives that we all experience in one way or another – and that has to do with identity. Her identity, my identity, our identity as being part of God’s people ‚Äì Taylor Swift’s song is about that struggle. About who she is. She knows what people say about her. She acknowledges it, names it, and she wrote a hit song to shake all that negativity off.

And you can’t listen to the song and not feel a little happier after you hear it. It’s just so catchy, upbeat, and fun. It is that song that just makes you feel good because, yeah, someone might be gossiping about us, but we’re gonna shake it off. We’re gonna rise above it. We’re gonna be better than that because words are just words and the words that other people say is not what defines who we are or what we can do. Only we, ourselves, can do that. There’s something extremely empowering about this. We get to dictate our own worth and value. We get to claim our own identity and titles. We get to name who we are and what we’re worth, no matter what opposition, gossip, and negativity heads our way. We get to claim an identity and grab hold of it. Others don’t get to define who we are – we do. That’s why the song is so upbeat, exhilarating, and popular – because having someone else put us down for who we are – that is a struggle I think we all can identify with. Standing up and saying “this is who I am and that the haters can’t get to me” – that’s empowering. That’s life giving. That’s a way of looking at life that we try to teach our children, that we ourselves try to model, that we try to live out. We proclaim this is who we are ‚Äì we are not what other people say we are.

So when Jesus asks his disciples what people are saying about him, who the religious and political authorities say he is, he’s playing around with this same question, with these same thoughts about identity. And he hears that the people know that Jesus is something important. They label him a prophet ‚Äì maybe one of the old ones or maybe something brand new. Jesus is big – something important – something that frightens the religious and political authorities. So when Jesus asks the disciples who they think he is – and Peter answers that Jesus is the Messiah – that Jesus is the big deal that will change the world – Jesus answers Peter in a striking way. In fact, Jesus answers in a strange way. He doesn’t do what we’d expect him to do. He doesn’t take that identity – that title – and claim it as his own. If you look at the text, Jesus doesn’t call himself the Messiah. He doesn’t say “I am the Messiah.” Those words are not recorded as coming from Jesus’ lips. Even the last bit in our reading today, we hear that Jesus tells his disciples to not even tell others that he is the Messiah. Jesus doesn’t do what Taylor Swift does – he doesn’t do what I would do – he doesn’t do what he’s suppose to – he doesn’t grab onto that identity and proclaim it from the rooftops.

***
This question of identity – it is a question that is bigger than a pop song. The struggle over the claiming and ownership of our identity – the opportunity and privilege to stand up, stand strong, and live the way God calls us to be – that’s a struggle that has real consequences. The bullying of gay, lesbian, and transgendered teenagers in schools, the role of race as shown by what’s happening in Ferguson, Missouri, the wars and battles that are raging across Syria, Israel, Palestine, and Iraq right now – identity matters in all of that. There are struggles that can’t just be shaken off. There are struggles in our lives that take more than just a pop song to change. But I think Jesus is modeling something here that we can model. And it goes back to that pause – to that moment after Jesus asks us that question ‚Äì “who do you say that I am” – when our own name is inserted and Jesus is waiting to hear our answer ‚Äì

Now – we will do what Peter does, we will proclaim that Jesus is the Messiah – that Jesus matters – that Jesus changes the world – but we’re invited to do what Jesus does too. We’re shown how to do more. The naming of Jesus as the Messiah leads to the act of blessing. The acknowledgment of Jesus as Messiah leads to the making of promises. The declaration of Jesus as the Messiah brings hope. Imagine living that declaration out. Imagine living that kind of life to everyone that you meet. Jesus here, I believe, is modeling what the people of God, the body of Christ, the church, can do. When Jesus is acknowledged, blessings to others are made. When Jesus is present, promises are made. When Jesus shows up, hope runs free. The church – all of us – we’re that promise. We’re that blessing. We’re that hope. Jesus invites us to live that out in all that we do – to stand with those who are trying desperately to own their identity and to be the people that God calls them to be – we can walk with them, we can live with them, we can acknowledge them and help them live that life.

Because when Peter calls Jesus the Messiah, the story doesn’t end. We know what comes next and Jesus does too. He knows that this story leads straight to the Cross. That’s where the Messiah was going to go. And that journey – that’s a journey he undertakes for all of us – all of us here and everyone outside these doors. Jesus doesn’t give up on people. He won’t give up on his disciples even when they run away from him when he’s arrested or and he doesn’t avoid those who will eventually deny him. No, Jesus continues to be with them. He continues to be present. He continues to love them.

And that’s our call. That’s our pop song – to be Christ-like – to bring love and healing into the world, not because we have the answers or we’re perfect or because we want everyone to be like us. No, we’re invited to go out and love because that’s what the Messiah does – even when it leads to death on the Cross – because Jesus knew, unlike Peter, unlike the religious authorities, unlike the world around him, and unlike even us today – that only through the Cross can each of us, all of us, those here at Grace and outside these walls, only through the Cross, can we finally shake everything off.