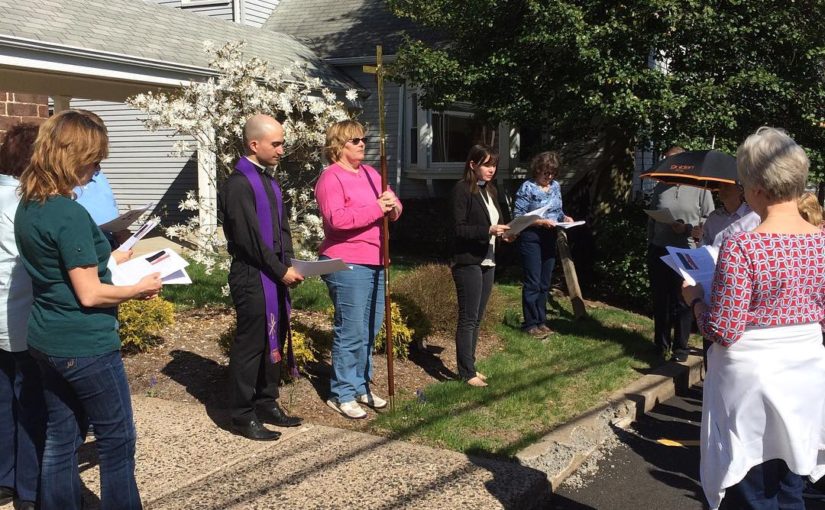 My church joined with two local churches to host a Cross Walk through Park Ridge, NJ. We walked through the eight stations of the Cross from Jesus’ condemnation to his death. We began in a church sanctuary where I preached the first part of the manuscript. We then ended in a church graveyard where I finished off the service. There is no audio since I was outside.

Also, preaching in a church graveyard next to the grave of a 1 year old (died in 1816) while my two young kids are playing in a pile of dirt in the distance is…it’s compelling.

One of the books that’s supposed to be on my kids’ bookshelf, but is usually on the floor of their bedroom, is called “Subway.” The story takes place during a dark, rainy day in New York City. Two kids and their parent are bored. They need to get out of their apartment. They need to have an adventure. So they grab their metropasses, run out their front door, and head to the local subway station. After hopping down some stairs, they’re out of the rain and on the platform. It’s there, while standing under some florescent lights and safely behind the yellow line, that everyone waits. And waits. And waits. Since the kids are New Yorkers, they know which way the train is supposed to come from. They know which side of the platform they should be standing on. They know their adventure is about to start. So they wait for their Subway story to story.

And here we are – waiting for Good Friday story to start. Many of us are here because we know how this Jesus story works. We know that Jesus, the Son of God, lived a human life and died a very human death 2000 years ago on the other side of the world. This is a story some of us know well. It’s also a story some of us might not know yet. Today might be our 90th Good Friday or it could be our very first – or at least the first we might remember. The story of Jesus’ journey to the cross is an old one. But it’s a story God asks us to always see as new. Today, we gather together, connected to the believers who have gone before us and to the believers who will come after us. We are here to tell and experience this ever-living and ever-present adventure one more time. We will walk what has traditionally been called “the Stations of the Cross.” To me, a station is just an episode; it’s one small scene in the larger act of Jesus’ journey. We will start with Jesus’ condemnation by the Roman Governor Pontius Pilate. We will hear about his torture and his long walk through city streets. There he will see women, friends, and a stranger will be drafted by the Romans to carry his Cross. Soldiers will mock him. Passerbys will torment him. We’ll be there at the foot of the Cross when Jesus strengthens the final bounds between his community. And we’ll hear his final cry. As we tell Jesus’ story, we will reflect on our own social realities, like we did last year, on the places in our world where too many people experience brokenness and pain.

So, here we are. We are at the start of the journey. We are on the platform, knowing the story that is coming. We are looking into the tunnel, into the shadow, into the darkness. As the story comes near, we will feel a wind of foreboding and fear. We will experience the rumble caused by words and prayers. We will walk Jesus’ journey – knowing that the shadow of the present, no matter how ominous, can never overcome God’s precious and eternal light.

At the End (graveyard)
We started this journey, waiting for the rest of the story to come. Like the kids’ waiting for the Subway, we stood on our version of a platform, looking into the shadow of a dark subway tunnel. We started today by looking into the abyss. And then the story came. In sacred spaces surrounding First Congregational UCC and Pascack Reformed Church, we retold bits and pieces of Jesus’ story. Along the way, we walked together, singing songs, and stopping in a very public place to remember that Jesus’ live in a very public way. We shared prayers and remembered that the suffering of the cross is a story too many people experience every single day. And now we end like we began, standing together, but in a new place. A different kind of place. A place where Jesus’ story was supposed to end.

So what comes next? We hear in scripture that, after Jesus’ death, his body was taken down. A man named Joseph, a disciple of Jesus, had recently paid for a tomb to be dug for himself and his family. Instead, he gives it to Jesus. Jesus is placed hurriedly in ancient Jerusalem’s graveyard. There isn’t time to properly prepare his body for burial so the disciples make plans to visit the tomb and finish the rituals that help people mourn and grieve. Jesus ends up in this kind of sacred place – a place where stories about people are remembered, recorded, and sealed in graves and tombs. Over time, the stories of the lives buried in places like this one, usually fall out of memory. But the echo of their lives still reverberate throughout time and space. Each generation is an heir to the generation that came before it. Each person, through their actions, their love, their successes, and their failures, impact the people around them. In ways we can not fully articulate, we stand here as people who contain the legacy, the stories, and the realities of everyone who has come before us. Jesus died because the Romans wanted to end his story and his influence. But God had other plans.

At the end of the children’s book Subway, the children beg and plead to stay on the train. They want to keep riding. They want to stay on the adventure. However, in the story it’s half-past-eight. It’s long past bedtime. The kids turn out the light, close their eyes, and fall asleep. But they make a promise. Their adventure and story they just lived through will live on, even in their dreams.

I invite us today to hold onto the story of Good Friday. We know how the story turns out. We know Easter will come. But there are times in our lives and in our world where Easter can only be spotted in our dreams. There are times when the Cross is all we feel and all we know. But the Cross is a story Jesus does not run away from. Instead, he challenges it. He faces it. He struggles through it. Because sometimes the only way to Easter, the only way through Holy Week and only way through our lives, is to just live through it.

Benediction
And now may the God who was born,
Who had siblings and knew what it was like to grow up,
Who made friends and lost them, who felt joys and shed tears,
Who brought good news to the poor,
And showed the world what God’s kingdom, God’s future, God’s hope, and God’s love actually looks like,
May the very face of that God shine on you, be gracious to you, and give you and this entire world – peace.