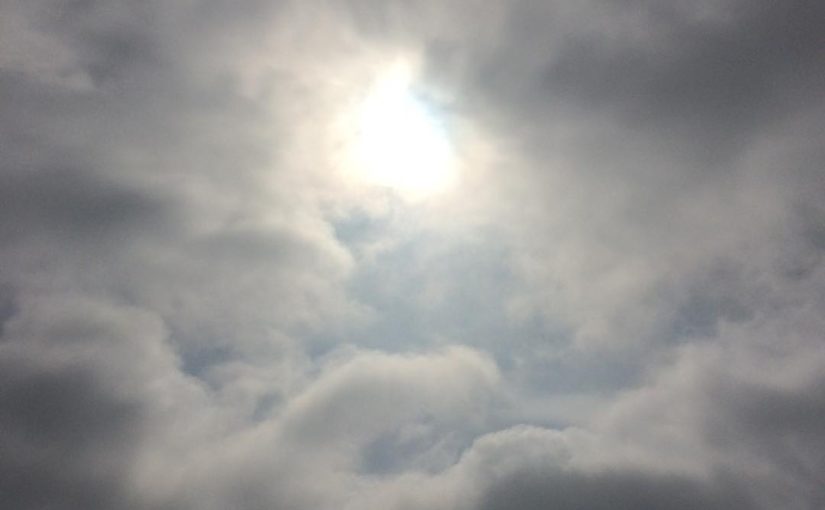 Now on that same day two of them were going to a village called Emmaus, about seven miles from Jerusalem, and talking with each other about all these things that had happened. While they were talking and discussing, Jesus himself came near and went with them, but their eyes were kept from recognizing him. And he said to them, ‘What are you discussing with each other while you walk along?’ They stood still, looking sad. Then one of them, whose name was Cleopas, answered him, ‘Are you the only stranger in Jerusalem who does not know the things that have taken place there in these days?’ He asked them, ‘What things?’ They replied, ‘The things about Jesus of Nazareth, who was a prophet mighty in deed and word before God and all the people, and how our chief priests and leaders handed him over to be condemned to death and crucified him. But we had hoped that he was the one to redeem Israel. Yes, and besides all this, it is now the third day since these things took place. Moreover, some women of our group astounded us. They were at the tomb early this morning, and when they did not find his body there, they came back and told us that they had indeed seen a vision of angels who said that he was alive. Some of those who were with us went to the tomb and found it just as the women had said; but they did not see him.’ Then he said to them, ‘Oh, how foolish you are, and how slow of heart to believe all that the prophets have declared! Was it not necessary that the Messiah should suffer these things and then enter into his glory?’ Then beginning with Moses and all the prophets, he interpreted to them the things about himself in all the scriptures.

As they came near the village to which they were going, he walked ahead as if he were going on. But they urged him strongly, saying, ‘Stay with us, because it is almost evening and the day is now nearly over.’ So he went in to stay with them. When he was at the table with them, he took bread, blessed and broke it, and gave it to them. Then their eyes were opened, and they recognized him; and he vanished from their sight. They said to each other, ‘Were not our hearts burning within us while he was talking to us on the road, while he was opening the scriptures to us?’ That same hour they got up and returned to Jerusalem; and they found the eleven and their companions gathered together. They were saying, ‘The Lord has risen indeed, and he has appeared to Simon!’ Then they told what had happened on the road, and how he had been made known to them in the breaking of the bread.

Font. Font is one of those words that means something different in the church than it does in the wider world. When we talk about fonts inside a church, we’re usually talking about the baptismal font. Our font is this little white box on wheels, with a metal bowl inside, and it’s the place where we hear God’s promises tied to something physical. With a little bit of water, we remember that we are part of something that is always life-giving. So a font in church is something physical; it’s connected to God’s promises; and the font is usually wet.

But fonts in non-church places are a little different. Fonts are everywhere. They surround us on signs filled with letters, on papers covered in words, and on little screens we carry in our pockets that show us the food are friends are taking pictures of every single day. The actual graphic design of those letters and words is called a font. And those fonts have names. There’s Times New Roman, Arial, Georgia, and Helvetica. Some fonts are crisp, clean, and easy to read. Some fonts are so well designed, they make the actual words themselves look beautiful. But there are other fonts that…well…are not as pretty. They’re not crisp or modern or easy to read. They are fonts that are so curly and flowy and out-of-whack that the words themselves are lost in a spasm of weird design choices. The gold standard for that kind of font is….Comic Sans. Now, Comic Sans is actually a really good font for people with some kind of disability like dyslexia. And we might think that Comic Sans looks whimsical and fun like letters in a comic book but…from a design perspective…from a perspective that thinks it can read everything just fine – Comic Sans is really not. Comic Sans flows and moves in such a way that makes words feel out of place. And when Comic Sans is displayed on an electronic screen, the font itself just…doesn’t work. When we receive a message written in a font that is hard to read or in a font that is downright ugly, we don’t read it. We chose not to engage with it at all. The words appear too harsh, too tough, and too odd for us to take them seriously. Instead, we delete the email or toss that piece of paper aside and ask the person who sent it to send it again but, this time, in a font we can actually read.
But what if that ugly font was all we had? What if all the letters and words in front of us were in this harsh and unforgiving font that we wanted nothing to do with? Recently, I came across a short video that talked about an experiment where psychologists did just that. The experiment took place at a school. One set of classrooms kept all their handouts, papers, and computer screens in a font we all know and love. Everything was easy to read. All the words were beautiful. Everything was as perfect as a high school handout could be. The other classrooms, however, had all their handouts in terrible fonts. Some were incredibly dense, where all the letters were blocky and squished together. Some classrooms put everything in italicized Comic Sans. Nothing about the handouts or screens looked beautiful because the words were displayed in awful ways. Both sets of classrooms used these kinds of fonts all year long. And then, after finals were over and grades were in, the psychologists compared scores. They discovered that the students who suffered all year long with those terrible fonts did better than those who only had beautiful words. Those awful fonts forced the students to take each word seriously; to struggle through the bad design so that they could understand what was in front of them. The students who could read everything in beautiful and well-known fonts, didn’t. Their brain subconsciously disregarded the words because they looked so nice, so easy to read, so the brain acted like it had already seen this information before. Good design actually failed the students because the design itself didn’t invite them to fully understand what was in front of them. This font experiment showed that…sometimes…people need to sit with the ugliness, sit with things that are hard to see, and struggle through periods of shadow and sadness to truly unpack what’s there. Sometimes living through whatever we’re facing is actually the most life-giving thing we can possibly do.

In today’s reading from Luke, the story itself should be much shorter. Those two disciples should have listened to the women. The women had already gone to the tomb and discovered that Death was no longer the final chapter. The women ran and told others and Cleopas and his friend…heard all of it. The beautiful words of the resurrection entered their ears so….they should have listened….but they didn’t. Instead, they left Jerusalem. They vamoose from the city that killed their teacher and those two friends of Jesus tried to go someplace else. They didn’t know what to do with Good Friday. They were there when all the hopes and dreams they placed on Jesus were hung on a cross. Their expectations of what Jesus was going to do was buried when he was placed in that tomb. The healings, the miracles, the teachings – the dreams about a better future right in front of them – all of that was broken. In a few short moments, everything they thought they knew was undone. Cleopas and his friend didn’t know what to do….so they left. They headed to the village of Emmaus because the brokenness of their dreams, and hopes, and expectations was something that even a beautiful word couldn’t break through.

Cleopas and his friend couldn’t listen to the women….but you’d think they could have listened to Jesus. Jesus chose, right at that moment, right at the point when these two couldn’t even hear the good news – that’s when Jesus met them. And Jesus should have made it better right away. He should have introduced himself, called these disciples by names, and poof – end of story. But instead…Jesus joined them. He talked to them. He asked them opened ended questions that let’s these two disciples unload their mourning and grief and worry and confusion – all of that – onto him. Jesus gets everything they’ve got but he still doesn’t break their grief. Even his reasoned arguments about what God was up to couldn’t make the pain of these two disciples melt away. They couldn’t even notice how the core of who they are – their very soul, heart, and identity – is being…revived…and renewed in the midst of their current struggle. Instead, their long journey with Jesus is filled with questions, sadness, worries, and concerns. Their long walk with Jesus is filled with the grief that happens when our hope filled dreams are met by the brokenness of the world we actually live in. The two disciples take their long journey with Jesus not even knowing Jesus is there. But he is – because God’s love, by design, is not only meant for us at a specific moment. God’s love is not like the love we already know so we trick ourselves into thinking we’ve already gone through it. God’s love for us…is… a movement. It’s a movement through our lives and our realities. We don’t always understand why things are the way they are. But we do live our lives with a God who chose to live a life because your life is worth everything to God. And not just the good parts. Not just those parts where everything is joyous or happy or beautiful. All of your life, every bit of it, is worth everything to God. And since all of your life has value, Jesus promises to be there in the moments when your life feels like it’s nothing because there’s no journey, no pain, no sadness, and no Cross Jesus won’t go with you – through.