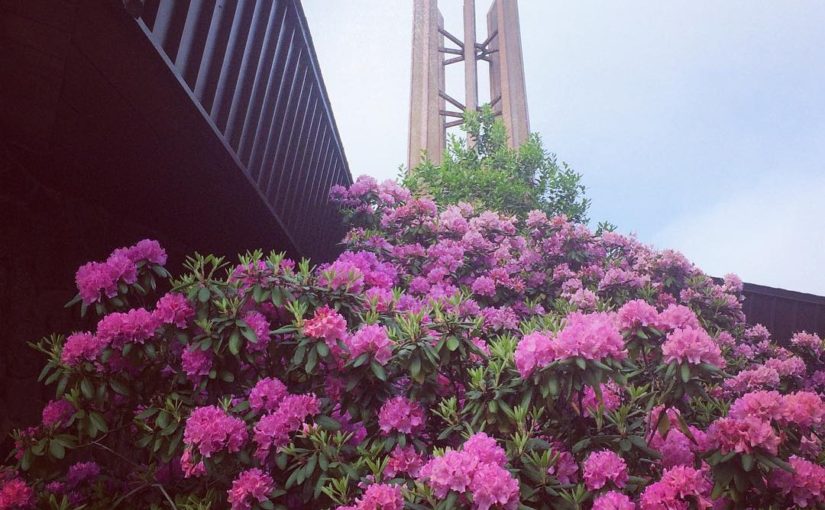 Therefore, since we are justified by faith, we have peace with God through our Lord Jesus Christ, through whom we have obtained access to this grace in which we stand; and we boast in our hope of sharing the glory of God. And not only that, but we also boast in our sufferings, knowing that suffering produces endurance, and endurance produces character, and character produces hope, and hope does not disappoint us, because God’s love has been poured into our hearts through the Holy Spirit that has been given to us.

For while we were still weak, at the right time Christ died for the ungodly. Indeed, rarely will anyone die for a righteous person—though perhaps for a good person someone might actually dare to die. But God proves his love for us in that while we still were sinners Christ died for us.

My sermon from 2nd Sunday after Pentecost (June 18, 2017) on Romans 5:1-80. Listen to the recording at the bottom of the page or read my manuscript below.

Yesterday, around noon, I was sitting at my dining room table, putting the finishing touches on a funeral sermon I would share a few hours later. When I was done, I gathered my things and headed out the door. And that’s when I noticed…the rain. By the time I was halfway down the block, it was pouring. This..wasn’t good because the funeral service I was about to lead was taking place outdoors in our Memorial Garden. When I finally got to church, I stood in the narthex, looked out the front doors, and did all I could to make the rain stop. I said a prayer. I stared intently at the sky, hoping the seriousness of my face would convince the clouds to back off for a little bit. But nothing I did worked. The rain kept falling. I then decided to move the service inside, hoping we could by some time, and give the skies another 15 minutes to clear out before we would bury ashes in the ground. We started the service, read the lessons, said our prayers, and the rain kept falling. Now I know it’s a bit presumptuous to act like yesterday’s rainstorm was specifically designed to interfere with what I wanted to do. But the rain came at the exact right time to upend the plans I made. If the clouds had stayed away for just one more hour, the service would have gone on without a hitch. But instead, the right time for the funeral was also the right time for the rain to fall.

Our reading today from the book of Romans mentions this…idea of the right time. Now, we call Romans the book of Romans but it’s really a letter. Paul is writing to a group of people in the city of Rome who believe in Jesus. We don’t know when this community was founded or who was first to bring Jesus there. Yet by the time Paul is planting churches all over the Eastern Mediterranean, a church in Rome had already been formed. Paul is hoping to visit this community and he introduces himself with a very long letter. The community in Rome seems to have some…concerns about who Paul is and what he’s teaching. They want to know more about what the gospel means to him. We sometimes make this long letter to the Romans seem like it’s Paul’s great attempt to put all his experiences of Jesus and faith and the church into a neat, cohesive, and coherent package that should be easy to understand. But I don’t think that’s Paul’s goal. He’s not trying to talk about Jesus as if Jesus is…some kind of fancy thought experiment, something we only have to keep in our heads. Paul isn’t hoping that the community in Rome will hear his words and then start nodding their heads in agreement. Instead, Paul is trying make Jesus happen to them. He’s trying to convey an experience that touches the core of all who hear it. Paul, using the only thing he has at that moment to share Jesus, uses a scroll and a pen to plant seeds of faith in those who hear it. And this faith doesn’t start by understanding an idea or a concept. This faith begins with a promise. In Christ, God has claimed you. In Christ, God has shown how much God loves you. In Christ, you are given a gift of faith that’s always in awe because the creator of everything has decided that this is the right time for you to know how much you matter. And you matter not because you are perfect or because you always do the right thing. You matter because God has created you. And that’s…enough. In a society that still makes up rules about who has value and who does not, God promises that even those society views as valueless are seen and noticed by God. The values of our society and of our culture are not the limit to the values God has. Everyone’s value is grounded in the relationship God starts with them and not the other way around. This promise God makes is a promise of hope. Because when your hope is rooted in God, it’s a hope no one can take away from you.

What Paul is doing in these short verses from Romans is to invite the community to live that promise out loud. This hope-filled promise begins in a God who sees them, knows them, values them, and won’t leave them on their own. This kind of hope isn’t wishful thinking or one that is so abstract and heady that we leave it out there, on the horizon, knowing we’ll never see if fulfilled so it never inspires us to live a different way. The hope that Paul sees is certain and sure and true. And it’s hope that knows God acts. In the words of Elizabeth Shively, “what God will do for the believer in Christ is grounded on what God has done.” God didn’t wait for us to be perfect before Jesus visited us. Jesus didn’t wait for us to understand everything he said before Jesus claimed us as his own. The God who acts is a God who doesn’t wait for us to catch-up. Instead, the God who acts is a God who comes to us first. Because the right time for God to meet us is always at our beginning. And God keeps coming to us over and over again because we need a lot of new beginnings. We need God to give us new eyes to see the world as it truly is. We need God to give us new hearts so we can love each other as much as God loves us. We need God to break the bonds of injustice that keep systems of oppression firmly in control. And we need God to keep giving us this hope that the God who has acted in Jesus won’t let upended plans get in the way of what God is about to do.

For people who are claimed by God, the trick to living your faith out loud isn’t trying to wait for the right time or right situation or right feeling to hit you before you start living. The trick is to always live in God’s love and hope and promise – even when the rain of sorrows, anxieties, fears, and hardships fall. Faith doesn’t mean that sorrows won’t come. Faith doesn’t mean that we never will be anxious. Instead, faith means that in spite of what comes, we live and act and believe that the future God has planned will actually come. And faith trusts this because Jesus has already come. Jesus has already called you by name. And once Jesus knows you, there’s nothing in this world that can push that promise away.