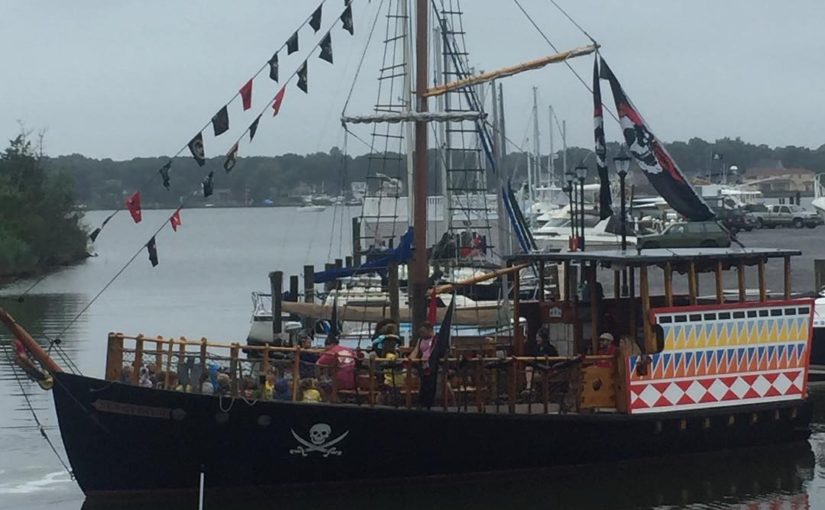 My sermon from 6th Sunday after Pentecost (July 16, 2017) on Romans 8:1-11. Listen to the recording at the bottom of the page or read my manuscript below.

Did you know that standing still had to be invented? That’s a bit silly thing to say because standing still is standing still. When we’re walking or running or skipping, we’re not standing still. But the concept itself is important because standing still and staying in one sport, isn’t so easy…when you’re on a boat. And that’s what I noticed yesterday, while on a 40’ pirate ship off the Jersey shore. Yesterday, my family and I attended Pirate Adventures in Brick, NJ. My two kids, Oliver and George, dressed up like pirates, with swords, striped shirts, and pirate bandanas. We joined a dozen or so other families and took an hour long adventure looking for treasure along the Jersey shore. The kids learned to talk like pirates and were led by “real-life pirates,” aka college kids who are probably drama majors and are living their best life four voyages a day. Our search for treasure involved shooting water cannons at the notorious Pirate Pete who had taken the keys to our secret treasure chest. And when all was said and done, we walked off the boat with our personal share plastic pirate gold and jewels. Now, since yesterday was a beautiful summer day, we were not the only boat on the water. Jet skis, fishing boats, speed boats, and more zipped by us as they headed out to deeper waters. Every time they passed us by, the wake they left would hit us, causing the pirate ship to bounced around. Trying to stand still while on the ship was….sometimes impossible. Even Pirate Pete needed a solid anchor to keep her from floating away. Standing still isn’t something we think about until standing still is something we can’t easily do. And when we’re in a boat, caught in a current, with waves and wakes slamming into us, what we need is a good, solid anchor, to keep us where we want to be.

Paul, in this week’s reading from his letter to the Romans, is continuing the argument we heard last week. In an almost repetitive, yet tongue twisty kind of way, Paul is reminding the Romans who they were and who they are now. In a sense, Paul is being very pastoral here which is usually something we don’t talk about when it comes to Paul. But as I continue to live my life as a pastor, and as I keep growing into being the Christian God calls all of us to be, my reading of the Bible and of Paul, has changed. Since Paul is writing to a community he’s never met before, and with Romans being his longest letter, we usually act like Paul is trying to explain, in just a few pages, his overall experience and understanding of faith. But Paul doesn’t write abstract letters. He writes letters to real people. And he knows real people, with their own thoughts, concerns, and ideas will hear his words. Paul isn’t being general in his letter. He’s not focusing on coming up with some grand scheme that defines who knows Jesus and who does not. Paul is writing to people who love and cry and smile and feel fear. They are people who Paul expects to meet and people who expect to meet Paul. And, as Paul reminds them over and over again, they are people who know Jesus. And, in their baptism, they are something new.

But how new are they? Yesterday, for a few moments at least, I got to pretend I was a pirate. But after the swashbuckling and water cannon fighting, I was still… me. Once my feet were back on dry land, I still had to live my life. I still had kids to take care of, a sermon to write, emails to read, and a million new things to add to my to do list. The same worries and joys and fears and concerns I had before I got onto the boat were still there, waiting for me, once I got off it. I can imagine the Romans, listening to Paul’s letter, noticing how he keeps reminding them that their baptism makes them new….and then thinking to themselves “really? But I’m still…me. Even after my baptism, the things I am concerned about, those passions and actions and emotions I want to get rid of – they’re still here.” After the joy and excitement and amazing feelings a baptism brings, that energy can feel like it fades when real life comes roaring back. That might be why Paul keeps reminding the Romans who they are, over and over again. And that might be why we gather here at church, over and over again, to hear that same promise. Our relationship with Jesus doesn’t depend on how we feel, or what we know, or what we think we need to know. Our relationship with Jesus depends only on what God has decided to do. And God has claimed each of us as God’s very own, through the gift of faith and baptism. When we’re not feeling Jesus presence, we can cling to the promise that he is here, right now. When we’re wondering where God is in a world that can be so brutal, we can cling to a savior who, even when he was dying on the cross, opened his arms to all. When we’re living our lives with busyness and joys and other concerns that cause us to forget Jesus, our baptism means that Jesus hasn’t forgotten about us. We are real people with real lives and with a real savior who never gives up on us. Paul’s letter to the Romans is reminding all of us about this seed of faith, this seed of relationship, this seed of a new life that God gives to each of us.

This seed, this Spirit of Life, is something we have right now. And Paul invites all of us to take that Spirit seriously. Since we have it, we don’t need to wait for it. We can engage with it right now. Prayer, study, and worship are just some of the tools we have to dig into this Spirit that God gives us. And by taking the time to explore this gift anyway we can, we become as life giving to our neighbors as Jesus is to us. This is how we discover how Jesus is that anchor we need in our lives. Because Jesus never says that storms won’t come. There will be times when the wakes and waves left by other people will crash into us. There will be moments when we will be the wave that tries to overcome us and our neighbors. And there will be times when staying with Jesus will be very hard. But it’s at those times when having Jesus will be the only thing that gets us through.