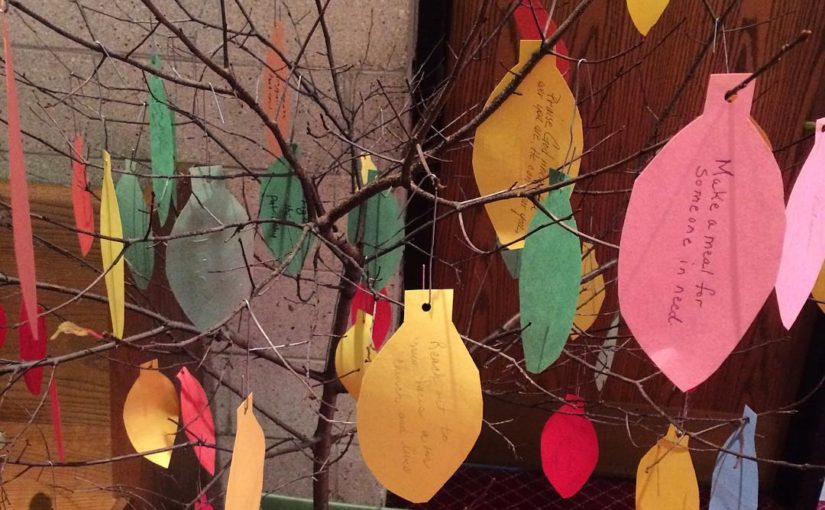 My sermon from the 24th Sunday After Pentecost (November 19, 2017) on Matthew 25:14-30. Listen to the recording at the bottom of the page or read my manuscript below.

What are you thankful for today?

Since it’s the start of Thanksgiving week, I’ve been thinking about being thankful. I’m thankful for my health and my family. I’m grateful for a roof over my head. I’m thankful for the pumpkin pie I ate last night. And I’m grateful for each of you, for this church, and for the grace God gives us each and every day. It’s not easy being thankful. But when we pause and take a moment to reflect on what we’ve been given, it’s not hard to find at least one thing to be thankful for. And so if you’re having a little trouble thinking about what you can be thankful for, here’s something you might not know. Three weeks ago, we celebrated the 500th anniversary of the start of the Lutheran reformation. We celebrated with special music, a large choir, and welcomed two other churches into this space. We gave thanks because a monk-turned-university-professor turned the Christian world upside down by posting 95 thoughts about Jesus, faith, and the church on a door in Germany. We call this church and this faith community Lutheran because of that German monk. But being “Lutheran” was something that almost didn’t happen. And I’m not talking about the what-ifs of history that could have put an end to the Lutheran reform movement. No, I’m really just thinking about the name. We’re Lutherans because that German monk was named Martin Luther. But, when Luther posted his 95 theses, he wasn’t known as Martin Luther. His real name, the name his parents gave him at his birth, was Martin Luder. Luther and Luder sound the same but they’re actually very different. Luder is a little awkward because, in German, Luder is something lewd. It’s a word associated with immorality. If things had turned out differently, we might know ourselves today as Luderans or the Lewds or something that doesn’t really roll off the tongue. Imagine inviting your friends and your family to come worship with you at Christ Lewd Church. That doesn’t sound very pleasant. So we can be a thankful that Martin Luder, after he posted his 95 theses, decided to do a new thing: he embraced his faith, his experience of Jesus Christ, by taking on a new identity so he changed his name to Martin Luther.

But why Luther? And what does that mean?

Well, he chose Luther because Martin was a guy who wasn’t afraid of being trendy. In the 1400s and 1500s, Europe was being transformed. New ways of looking at the world were coming into being. Universities across Europe were still a new thing and they were embracing a new way at looking at the world called humanism. Now humanism has many different parts to it but a core piece of it is a desire to “get back to the sources.” Humanists reached back into their cultural past to rediscover ideas that they had lost. They re-learned ancient greek so that they could read Plato, Aristotle, and other early philosophers in their original languages. Bible scholars started to do the same and published the first greek new testament to appear in Western Europe in something like 1000 years. Humanists loved being humanists and they wanted to make this movement part of their very identity. And some did this by literally changing their name. They created new first and last names and made them as greek as possible. And Martin Luder did the same. After he posted his 95 theses, he started to sign his letters and his papers with the name Martin Eleutherius which means – Martin: the freed one. Eventually, he stopped writing Elutherius and instead shortened it to Luther. This church and this community of faith are named after someone who chose their own name. We are the descendants of a German monk who threw off the name and identity he was given at his birth to become something new. Martin Luther became Martin Luther because his relationship with Jesus changed. He wrestled with doubts, fears, and was angry with God. But his encounter with Scripture forced Martin to realize he was more than just his father’s son. He was, because of Christ, “the freed one.” There was something about Jesus, something about faith and grace, that caused Martin Luder to break his connection with his past and embrace a new point of view. God gifted Martin Luder with an insight into God’s relationship with all of us. Luder no longer saw life as a mere few years where we try to get the God to be somehow on our side. Instead, Luther saw how, in Jesus, God already was. God gave Luther a new way of loving himself and serving the world. God gave Luther a gift. And God gives us these gifts so that we can be gift-givers like God.

So when we think about God or look for God in our lives, God as a gift-giver is one perspective that helps us see God anew. But God as gift-giver doesn’t mean that God is Santa Claus. God’s love for each of us isn’t defined by how many toys or wealth we actually have. And chasing after those things isn’t what God wants for our lives. We can read a parable like today’s from the gospel according to Matthew and think there’s something about faith that requires us to double our money. A talent, in the New Testament, was a physical quantity of silver or gold that weighed something like 130 lbs. This parable, on the surface, seems to celebrate those who turn a lot of money into more. But this isn’t a parable about money. It’s about the kingdom of God. And in that kingdom, the only things we have are what God first gives us. Each slave in this story is entrusted with a gift and are supposed to use that gift as if they were the master himself. Two of the slaves embraced this challenge. They didn’t hide what they were given nor did they keep it for themselves. They took risks. They tried new things. They engaged with the world and, somehow, their gift grew. When they first received their gift, a new relationship was formed. That relationship created a shared identity where they were called to be like the master. At the moment the gift was given, the three in the story were entrusted to become something more than just themsleves. They were now gift-givers, too.

Martin Luder struggled to see the gifts God gave. He longed to discover a loving God but his prayer, worship, and study couldn’t shake his sense of worthlessness before the God of all. He was focused on the gifts he thought he needed to give to God, to make God love him, but he could never do enough. Yet once he saw God in a new-light, as a God who is a gift-giver, Martin Luder could no longer be the person he was before. The gifts God gave him were more than just his intellect and other talents. What God gave Martin Luder was a Jesus who, no matter what, would never let him go. That is something he could be thankful for. Jesus is more than just someone to follow, believe, or trust. Jesus is also a gift given to us. We will always be a little like Martin Luder, struggling to see God and wondering if this God thing actually matters at all. But through our baptism and through a faith that God gifts to us each and every day, we can live lives that do more than just focus on ourselves. We can live, like Luther, as a freed one. We can become people thankful for the gift of Jesus himself. And since Jesus is our gift, we are entrusted to do nothing less than share that gift in everything that we say and do.