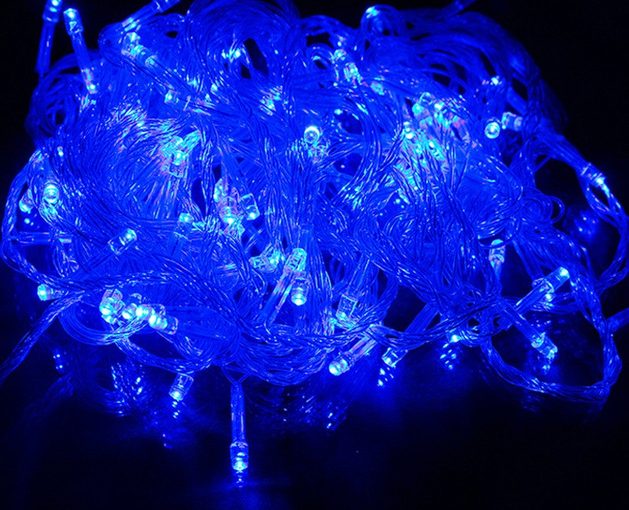 This is the testimony given by John when the Jews sent priests and Levites from Jerusalem to ask him, “Who are you?” He confessed and did not deny it, but confessed, “I am not the Messiah.” And they asked him, “What then? Are you Elijah?” He said, “I am not.” “Are you the prophet?” He answered, “No.” Then they said to him, “Who are you? Let us have an answer for those who sent us. What do you say about yourself?” He said, “I am the voice of one crying out in the wilderness, ‘Make straight the way of the Lord,’” as the prophet Isaiah said. Now they had been sent from the Pharisees. They asked him, “Why then are you baptizing if you are neither the Messiah, nor Elijah, nor the prophet?” John answered them, “I baptize with water. Among you stands one whom you do not know, the one who is coming after me; I am not worthy to untie the thong of his sandal.” This took place in Bethany across the Jordan where John was baptizing.

When I was younger, the long string of Christmas lights that wrapped around my Christmas tree sort of scared me. Now, don’t get me wrong – the lights were beautiful to look at. But I never really had a good relationship with the lights themselves. They were always tangled and I was the one assigned to untangle them. I would tested each string of lights and I usually ended up getting a little electric shock while trying to find that one bulb that was burnt out. And when the lights were finally wrapped around the tree, the bulbs would get so hot they would burn me when I accidentally touched them. Old fashion Christmas lights were kind of spooky to me but nowadays, LED Christmas lights are a brand new thing. They come in all sorts of colors; they are incredibly bright; and even though they still get tangled, they at least remain cool to the touch. I really like LED Christmas lights and I know I’m not alone. In fact, it seems like a lot of suburban homeowners are switching their outdoor Christmas lights to LEDs. And this is a good thing because LEDs, in theory, last a long time and use less energy. If, for example, an old fashion string of 100 mini-incandescent lights were turned on and used 12 hours a day for 45 days in a row, that would cost about $3.50 to run. But if you took that string of lights and replaced it with LEDs, the cost to use those lights drops to 41 cents. That’s 1/8th the cost for the same amount of light. We can make our outdoor Christmas lights displays more environmentally friendly and cheaper all at the same time. But some recent studies involving nighttime satellite imagery shows that the transition to outdoor LED Christmas lights is not only about having a less costly electric bill. No, people are using that cost savings to invest in more lights. Because if it costs 1/8th of what it did before to run a new string of lights, it makes sense to get 7 more strings of lights so that you can maximize the your Christmas buck. Our outdoor Christmas light displays are getting bigger and brighter. And if you were up in space and looking down on the United States, you would see the light output in the suburbs increase by 50% during the month of December. And with LEDs now becoming more prevalent, that number grows every year. These new LED lights help us to shine brighter than we ever could before. This is one of the ways, I think, we testify to a truth that we don’t always feel or see. As the nights in our part of the world grow longer and longer, we do the only thing we can do: we flip a switch and throw a little more light into whatever darkness surrounds us.

And flipping that switch – that’s a very Advent thing to do. As we hear in our reading from John today, testifying – shining – witnessing to this light – is what this season is all about. Now, this week is a little odd because we met Mark’s version of John the Baptist last week. And John’s version of the Baptist is a bit different. John’s Baptist spends a lot of time saying no. “No, I’m not Elijah. No, I’m not the prophet. No, I’m not the Messiah. No, I’m not the light.” Instead, what John’s Baptist does is testify. He shares and bares witness to the truth. Mark depicts John the Baptist as a bit of a wild man who is eating bugs out in the desert. But John’s Baptist is a guy who primarily just talks. He shares what he knows and what he has experienced. Over and over again, he breaks the silence that wants him to stay quiet. John’s Baptist keeps talking about God, pointing out to others where God is and where God is active in the world. At every possible moment, he is pointing to that light that he knows is out there. And he does this even though he knows not everyone will believe. Once john’s Baptist tells the truth, he has no control over what other people will say or do once they hear it. He doesn’t get to tell others how they should react. So John’s Baptist just keeps on talking – and he doesn’t let his fear about how other people will respond stop him from telling the truth; the truth that is Jesus – this God in the flesh.
And this kind of testifying, this kind of witnessing, is really hard. It’s hard because keeping silent is sometimes the safest thing we can do. Any time we share a truth or an experience that we’ve had, it’s easy for others to not believe us. How many times have you had your feelings brushed aside after you shared how you felt? How many times were you blamed for that thing that you experienced? Too often, we are told that our feelings or responses to our personal experiences are, somehow, wrong. We’re the ones, we’re told, who misinterpreted what happened to us. We’re the ones who are being too judgmental and our experience wasn’t really that bad and we’re being a little too sensitive. We start believing what others say, learning that we can’t trust our own experiences, and that other people are the only ones allowed to interpret our own story. We discover what it’s like to be disbelieved and, in that process, we lose the ability to tell our own story. We lose a bit of who we are because this shadow that surrounds us has more say over our lives than we do. We end up doubting the truth and we try to cover up whatever light we see.

But the truth is something that always needs to be brought out into the open. When we tell the truth; when we give witness to the light as we know it, we are, in the words of Dr. Karoline Lewis, “[insisting] that [this] light will indeed shine, [overcoming] the darkness that has hidden so much for so long.” This season, this Advent, is more than just a countdown to Christmas. Advent is an opportunity for all of us to flip a switch, to turn on every light, and give witness to the truth that we know. Every experience we’ve had is our experience and the story we tell is a story that has value. Now, I know that not every story will be told. And there are some stories that we might not be ready to share with those around us. And that’s okay. But when we hear someone else’s truth, we are called to protect their truth and believe them. We’re not here to dismiss them. We are here to listen, to learn, to comfort, and – if need be – to change. And if we can, we add a little more light to their story by telling one of our own. We show through our words and actions that they are not alone. Because, as we see in today’s reading from John, testifying to the light – sharing and giving witness to the truth is our Christian calling. It’s what Advent – this time of waiting – this time of anticipation – this time of expecting – is all about. Because Jesus invites us to remember that “our God…moves about this world feeling everything we feel.” Our God is always with us, no matter what. And because God is with us, because God decided to be born, to grow up, and have actual human experiences, our God, our Jesus, will be with you even when telling the truth ends up being the hardest thing you’ve ever done.