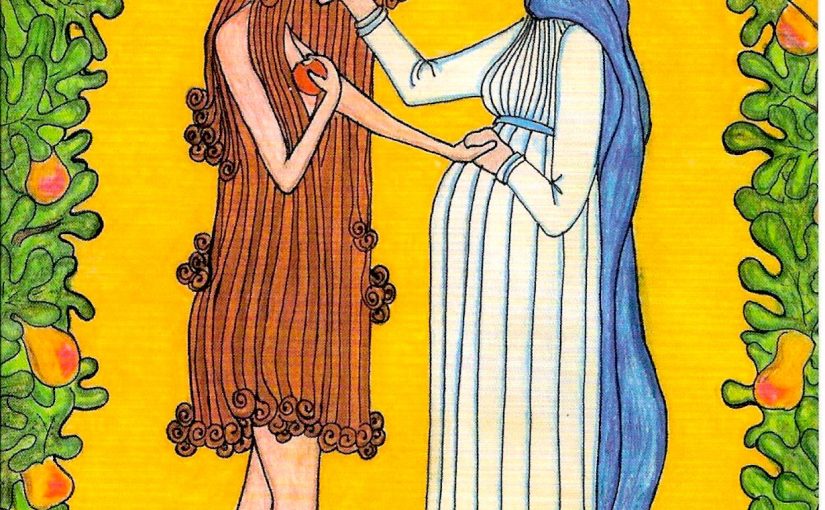 In the sixth month the angel Gabriel was sent by God to a town in Galilee called Nazareth, to a virgin engaged to a man whose name was Joseph, of the house of David. The virgin’s name was Mary. And he came to her and said, “Greetings, favored one! The Lord is with you.” But she was much perplexed by his words and pondered what sort of greeting this might be. The angel said to her, “Do not be afraid, Mary, for you have found favor with God. And now, you will conceive in your womb and bear a son, and you will name him Jesus. He will be great, and will be called the Son of the Most High, and the Lord God will give to him the throne of his ancestor David. He will reign over the house of Jacob forever, and of his kingdom there will be no end.” Mary said to the angel, “How can this be, since I am a virgin?” The angel said to her, “The Holy Spirit will come upon you, and the power of the Most High will overshadow you; therefore the child to be born will be holy; he will be called Son of God. And now, your relative Elizabeth in her old age has also conceived a son; and this is the sixth month for her who was said to be barren. For nothing will be impossible with God.” Then Mary said, “Here am I, the servant of the Lord; let it be with me according to your word.” Then the angel departed from her.

I think it’s fitting that on this Christmas Eve morning, this fourth Sunday of Advent, we are spending time trying to see Mary. And that word “see” is important. Today’s reading from the gospel according to Luke is known as the Annunciation: the moment when the angel Gabriel tells Mary about what God has in store for her. The passage tells us the general location where this event is taking place and who is there but that’s about it. We don’t know where in Nazareth Gabriel met Mary. And the passage doesn’t tell us any details about Gabriel and Mary themselves. We don’t know what they look like or even how old Mary was. Instead, scripture gives us an opportunity to step into this part of the story and imagine this moment for ourselves. For centuries, artists have done just that. And so, if you don’t mind doing something a little different, I’d like to showcase a few pictures of the Annunciation so that we can see how this moment in scripture has inspired artists for centuries.

Now some of those images might have been familiar to you. They might resemble what we imagine this scene to be like. But other painting might have surprised you. Several of the images showed Mary reading a book. The book is usually identified as the book of Isaiah, implying that Mary was literate, educated, and that angel found her in a moment of prayer and study. Other pictures showed Mary in the dark of her bedroom or even while she was still in bed, at the moment when she was waking up. Some of the Marys had the white skin of Northern Europeans. Others were olive, brown, and black. Some artists depicted Mary as a young adult while others imagined her to be the teenager she probably was. Each one of the artist used scripture, their cultures, and their traditions to imagine what it would be like to be a teenager in Nazareth who is suddenly told that she is going to give birth to God.
Now, as Lutherans, I know we don’t usually spend a lot of time with Mary. Her appearances in scripture is limited so we don’t hear her voice very often in Sunday morning. We spend time with Mary usually only during this season – when it’s almost Christmas. We give her a voice in our Christmas pageants and in the carols we sing. We talk about her, about how she’s going to give birth in a barn, and we sort of downplay the rest of her 9 months of pregnancy. We place Mary in our nativity sets and creches, with her hands folded in prayer. But she sort of sits in the back, behind everyone else, behind even Jesus. We place her there and then just let her be. In many ways, we spend this Christmas season letting Mary be a passive participant in her own birth story.

But is she really as passive as we make her to be?

There are two other images of Mary that expand her story for me. And each one appears takes place while the baby inside Mary grows. The first one is this one, an image of Mary based on the song we just sang. She’s standing tall, her foot is crushing the serpent from the Garden of Eden, and she doesn’t look pregnant. Mary sings her song while visiting her cousin Elizabeth. Elizabeth is more than six months pregnant with her own son who will become John the Baptist. But while everyone knows Elizabeth is pregnant, Mary doesn’t yet show. I imagine that Mary, in this moment, is in her first trimester. She’s in the part of her pregnancy where miscarriages are common. Mary can be quiet at this stage but she knows what’s going on. She knows what God is doing. And she sings about who God is, who God loves, and what God’s justice is all about. The second image is one I discovered recently, first created in 2003 by a Trappistine nun in Iowa. The image shows Mary when she is very pregnant. She can’t hide what’s going on anymore. But she doesn’t need to. Instead, she’s everything who she chooses to be – and she’s in this image, consoling Eve. Her foot again is on the head of the serpent because, through her, God is moving us past our sins. Her son, this Jesus, will be the one who will take this broken world and unite it with its creator. And this Messiah, this Savior, this king of all kings, is being nourished, carried, and cared for by this young woman who is someone that the people in Nazareth could not see as ever being the mother of God. In these last two images, Mary is exactly who she’s supposed to be: she knows who she carries inside her; she knows who God is; she knows that’ll she’ll be Jesus’ mom; and she chooses to be an active participant in what God is doing in the world. She doesn’t know the details about Jesus’ story – but she does know that, through Jesus, God is blessing the world. And God wanted Mary to be a necessary part of what God is bringing about.

Send the Rich Away – Ben Wildflower https://www.etsy.com/shop/BenWildflower
Mary Consoling Eve – A sister from Trappistine Monks in Iowa made this