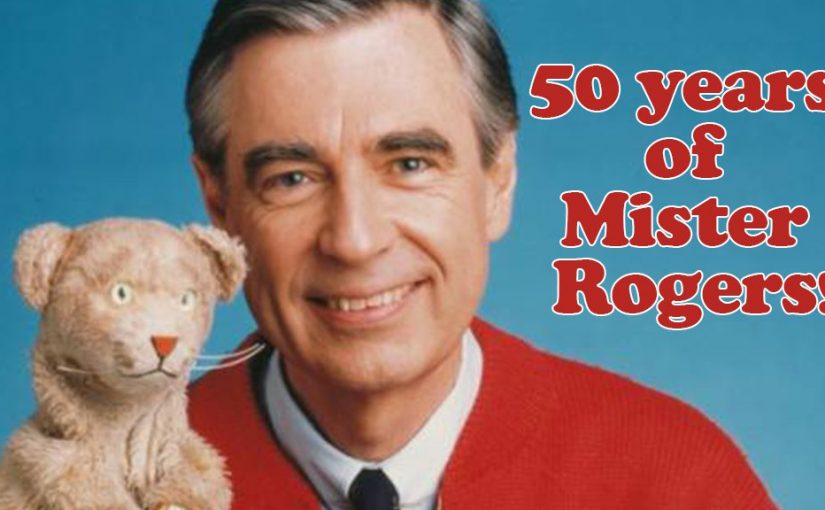 Indeed, God did not send the Son into the world to condemn the world, but in order that the world might be saved through him. Those who believe in him are not condemned; but those who do not believe are condemned already, because they have not believed in the name of the only Son of God. And this is the judgment, that the light has come into the world, and people loved darkness rather than light because their deeds were evil. For all who do evil hate the light and do not come to the light, so that their deeds may not be exposed. But those who do what is true come to the light, so that it may be clearly seen that their deeds have been done in God.”

I never knew that Batman was a member of one of my favorite neighborhoods. But earlier this week, there he was, hosting a special on PBS about a man who lived in his own magical neighborhood. Michael Keaton, the actor who played Batman in the late 80s and early 90s, spent this week honoring the 50th anniversary of the national broadcast of Mister Rogers’ Neighborhood. That neighborhood, filmed in Pittsburgh, is where Michael got his start so it was fun watching him narrate the world Mister Rogers created. Together, we remembered all the guest stars who appeared on the show, including the amazing musicians who showed kids that the cello was pretty neat. We reconnected with Lady Elaine Fairchilde, Queen Sara Saturday, and Prince Tuesday by taking a trolley into the land of make believe. And we wondered if we could ever look as cool as Mr Rogers did in those brightly colored cardigan sweaters. My favorite moment from the PBS special was when Mr Rogers was learning how to play Head, Shoulders, Knees, and Toes. That game, if you’ve never played it before, is exactly what it sounds like. You touch your head, shoulders, knees, and then your toes. It’s the perfect game to teach toddlers where their different body parts are. And it’s also a fun game to watch adults, with their sore knees, bad backs, and lack of flexibility, try to play too. Now Mr Rogers, in this segment, couldn’t keep up. He kept messing up the order. And when his guest did something new, Mr. Rogers made a ton of mistakes. The director wanted to refill the scene so that Mr Roger could get the game right. But Mr Rogers said no. He wanted kids to see him get the game wrong. He wanted everyone to watch him make mistakes but also see him keep trying. Mr Rogers did what so many of us don’t do. Mr Rogers wanted everyone to see him own his mistakes.

Which, if you think about it, is really hard. Because who wants to show their mistakes? We usually don’t mind telling other people what they got wrong. But not many of us enjoy admitting when we messed up. I don’t know many kids who brag about doing poorly on a test. And when we shrink our spouses’ favorite sweater in the dryer, we sometimes hide it and hope they forget that they ever owned it. Even professional athletes, who are some of the most hardworking and talented people in the world, rarely celebrate their mistakes because they know that mistake will be broadcasted a million times on ESPN sportscenter. Even when we learn how to use our mistakes to help us grow, we don’t usually want to do that in public. It’s scary admitting our mistakes because we know what mistakes can do. They can be silly and meaningless, like touching our toes before our knees. But our mistakes can also be very serious. And the consequences of those mistakes can hurt ourselves or the people around us. Being honest about our mistakes, even the ones we made in the past, asks us to do something we usually refuse to do: and that’s admit we were wrong. So we run away from being honest about our mistakes. We avoid facing the consequences that come up when we admit we messed up. And we hide the vulnerability we need to show when we own the mistake we’ve made. In a world where we’re supposed to present our very best, owning our mistakes is a terrifying thing to do.

But what would our lives look like if we admitted everything we got wrong? What if we owned the mistakes we made to our spouses, friends, and each other before we tried to hide them? What if we lived a life that proclaimed that our mistakes are supposed to be seen in the light? But not in a way that tried to avoid the consequences of our mistakes. But a life that acted like those consequences actually mattered? What would that kind of life look like? Well, in some ways, that life might look a bit like John chapter 3.

Because even though these verses are some of the most famous verses in all of the New Testament, their context is usually unknown. We forget that these verses came from a conversation that Jesus had with a man named Nicodemus. Nicodemus, in the middle of the night, found Jesus alone. He showed up, unannounced, and didn’t even knock on the door asking for Jesus’ permission to visit. Instead, Nicodemus just walked in and found Jesus already there. The two of them talk and there’s no one else in the room. And when we get to verse 3:16, we usually interpret this passage as if Jesus is offering Nicodemus a choice. Believe in me, make that right choice, and you’ll have eternal life. We focus on the last part of 3:16 and we assume Nicodemus understood these words the same way. But if he did understand what Jesus said, then Nicodemus made a mistake. Because the Bible doesn’t record him saying anything back to Jesus. Instead, the Bible lets us assume that Nicodemus, after he heard these words, just left. This guy, who literally saw Jesus face to face, walked away, into the night. That feels, on some level, like it would be a mistake. If the point of this passage is to help us choose Jesus, than Nicodemus messed up. He vanishes from the story and we never expect to hear from him again. And we don’t…until two years later. But this time, Nicodemus doesn’t say a word. Instead, with the help of Joseph of Arimathea, Nicodemus takes Jesus down from the cross and the two of them, almost silently, bury Jesus in a tomb.

Nicodemus came back near the end of the gospel according to John story. So it seems that he did choose Jesus at some point. But scripture never shows us that moment. We actually have no idea when Nicodemus chooses Jesus. All we get is this “mistake” and then the burial. And I wonder why that is. Why keep this mistake in? Because, according to John, only Jesus and Nicodemus we’re in the room when John 3 happened. Now Jesus might have told others what happened that night but what if Nicodemus was the one who shared the story? Would we expect him to keep it just as it was? Most of us, i think, if we were in Nicodemus’ sandals, would act differently. We would tell our friends and family that we followed Jesus way before it was cool. We would try to cover up whatever mistakes we made. And we would make sure that everyone knew when we made our choice. But if Nicodemus is the one who shared this story, he doesn’t do any of that. He doesn’t hide his “mistake.”

Nicodemus, like Mr Rogers, owned his mistake. And I think he did that because it was the second part of John 3:16 that mattered to him. It was the first. What made all the difference was that when he came out of the dark, he saw that Jesus was already there. And when Nicodemus finally saw Jesus, he was scolded or condemned or belittled by him. Instead, Jesus listened. He answered the questions Nicodemus asked. And he let Nicodemus be exactly who he is. Jesus didn’t force anything on Nicodemus and he didn’t ask for Nicodemus to make a choice right then and there. Instead, Jesus showed that God isn’t focused only on the moment that it might take for us to declare a choice we made. Our God, instead, is a God for every one of our moments, including when it feels like all we can do is make mistakes. The Jesus who met Nicodemus in the middle of the night is the same Jesus who meets us, right now, as we are. And that Jesus is here to carry us into a future where we don’t have to hide the truth of who we are; a future where we can admit the mistakes we’ve made and we can live into the consequences honestly and faithfully; and this same Jesus promises to give us a new life where we will, through his love, grow and become the person who God wants made us to be.